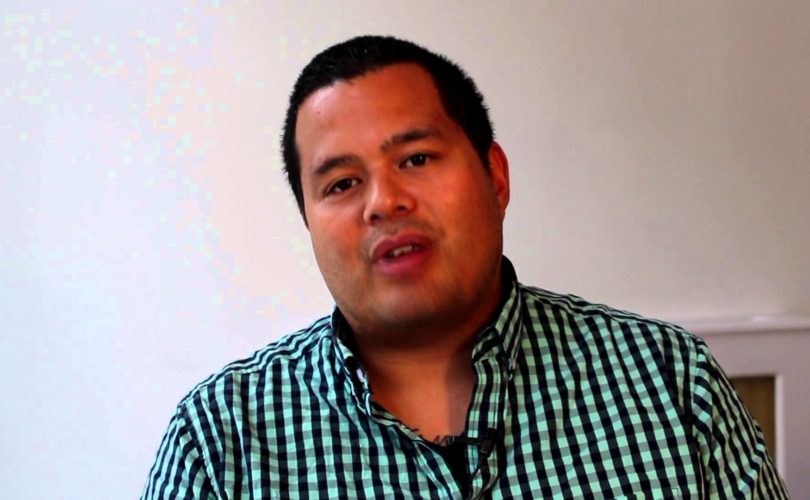 LOS ANGELES, CALIFORNIA, November 10, 2015 (LifeSiteNews) — Robert Oscar Lopez isn’t your typical social-conservative professor: he was raised by his mom and her lesbian partner, and he openly admits that he is bisexual.

But he also opposes same-sex “marriage” and adoption, and even submitted a brief to the United States Supreme Court arguing against the redefinition of marriage. He bases his views in part on the trauma of his parents’ divorce when he was a toddler, and his subsequent experiences of being raised in a same-sex household.

Now he says he's under attack for defending the rights of children to be raised by their natural parents. Specifically, he may lose tenure, and even faces suspension without pay, from California State University-Northridge, the taxpayer-funded university that tenured him just two years ago.

Lopez says that it all began when he gave his students the option to attend and present research, for credit, at a conference he organized on parenting and children's rights at the Ronald Reagan Presidential Library in 2014.

One of the speakers there, Jennifer Roback Morse of the Ruth Institute, spoke on the topic of divorce, during which she says she never discussed the issue of homosexuality. However, at her table she had several pamphlets, including one titled “77 Non-Religious Reasons to Support Man/Woman Marriage.” She says that speakers at the conference supported the right of children to be raised by their mother and father.

After choosing to attend the conference, a student subsequently filed a complaint against Lopez, claiming that he discriminated against her based on gender. She also submitted a copy of Roback-Morse’s pamphlet, and one other pamphlet entitled “Are You a Survivor of the Sexual Revolution?” as evidence that Lopez had created a “hostile learning environment on the basis of gender and sexual orientation.” Other students also reportedly filed similar complaints about the conference.

In an e-mail sent to media, Lopez says that he has been under investigation by the University of California's Northridge administration for 378 days for alleged discrimination and retaliation against students. Lopez says he himself didn’t find out he was under investigation until 245 days after the process was launched.

He also said that one of the three people heading the investigation compared the event at the Library to being tricked into going to a KKK rally.

STORY: I grew up with two moms: here’s the uncomfortable truth that nobody wants to hear

Harassment is nothing new for Lopez. The radical LGBT organization Human Rights Campaign targeted Lopez in 2014 as part of the so-called “Export of Hate”, something he says leaves him fearing for his family's safety.

Now, he says the university violated policies when it targeted him, and he is threatening legal action against the university for violations of California employment and civil rights law.

University policy states that it will complete investigations “no later than 60 working days after the intake interview,” with a 30-day extension if necessary. However, in a deposition, the university told Lopez he was investigated after formal charges were filed in May.

Lopez also points out that the deposition says the allegations made against him by a female student “were similar to the allegations made” by two students “about the conference just days after it took place on October 3” of last year – meaning the investigation apparently started in 2014.

The university eventually found Lopez innocent of discrimination, but last month found him guilty of retaliation against a student. Lopez says the “retaliation” claim is clearly bogus, pointing to how the student in question got an “A” in his class, even after reporting him, and that there is no documented proof of retaliation.

The findings could cause Lopez to lose his job.

In a letter to the university, Lopez's attorney — Charles LiMandri with the Freedom of Conscience Defense Fund — wrote that the finding of retaliation violated university policy, noting that while “intimidation” and “retaliation” have high bars in official university documents, the charges against Lopez are based upon conversation fragments that took place seven months apart.

“In sum, this evidence does not even begin to meet the CSUN's own standard for 'retaliation,'” says the letter. “Under these circumstances, we have no choice but to conclude that the disposition of this investigation is purely political and ideological attack on Dr. Lopez for holding — and exposing his students to — ideas about children's right in the context of family and reproduction which are apparently unpopular at CSUN.”

Lopez says that when it comes to the question of same-sex “marriage,” he is most concerned about the rights of children.

“Same-sex 'marriage,' theoretically, does not impinge on anyone else's rights,” Lopez told LifeSiteNews last year. “But if you guarantee a right to children as part of marriage, now this drags in the rights of other people — there is a third-party…Not everyone gets married but every human being has a mother and father; those latter relationships are more fundamental than a spousal relationship.”

Lopez filed an amicus brief with the Supreme Court on behalf of children and against redefining marriage, saying that it was children, not same-sex couples, who have real standing in court on the issue of marriage.

Lopez also strongly opposes IVF, telling LifeSiteNews that “gay advocacy groups are pushing for the creation of children through artificial reproduction technology and for adoption systems that give children to gay couples because the gay couples want to be parents, not because children need to be in their homes.”

“This is the transformation of human beings into chattel in a way we haven't seen since before slavery was abolished. I have stated many times that this isn't identical to the African slave trade, which involved far worse abuse, but there is an undeniable commonality between pre-13th-Amendment slavery and what is being advocated by groups like the Human Rights Campaign,” he said.

Roback-Morse has come out in support of Lopez. “I believe the sexual revolutionaries despise Robert Lopez because he challenges one of their core assumptions,” she wrote this week at the National Catholic Register. “The sexual revolution is based on the idea that all adults able to give meaningful consent are entitled to unlimited sexual activity with a minimum of inconvenience. What they never mention is this: Children just have to accept whatever adults choose to give them.”