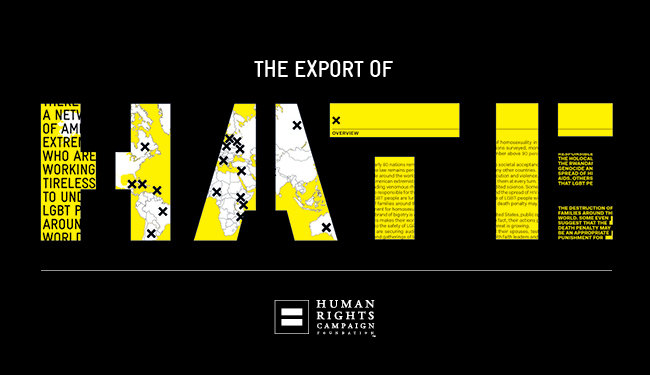 And according to the homosexual activist group Human Rights Campaign (HRC), he is guilty of the “export of hate.”

In 2012, Lopez wrote an op-ed for Public Discourse describing the impact of being raised by two lesbians. Lopez told LifeSiteNews that, while he “was emotionally very close to my mother's lesbian partner,” he also “was alienated from my father and therefore from half of myself.”

“I oppose any agenda that compromises the sacred rights of children to their maternal and paternal lineages,” he told LifeSiteNews. “Whether it is straight or gay people doing this, I oppose it.”

In a recent post at the online conservative journal American Thinker, Lopez explained his position further. “Like an obsessive-compulsive one-note Charlie, my refrain has been, for years: children have an inalienable right to a mother and father, cannot be bought or sold, and are entitled to know their origins. Whether it is straight people or gay people using divorce, surrogacy, trafficking, or any other means to deny people these rights, I oppose it,” wrote Lopez.

However, with fame and influence has come threats that have left Lopez concerned for the safety of himself, his wife, and two children. He told The Daily Signal that the HRC's efforts have left him feeling “completely isolated,” as well as “having to worry every time I leave my home — and my wife is there with the newborn — and not knowing whether I’m going to get killed, it’s really hard.”

Last week, in an essay at First Things, Lopez explained some of the harassment he has endured as a result of HRC, GLAAD, and other LGBT pressure groups targeting him.

Students have verbally targeted him, Lopez wrote, and he was called a “bigot” and “right-wing [expletive]” in e-mails because HRC sent an email to its 1.5 million member list claiming — falsely, he says — that he “delivered anti-gay comments at a World Congress of Families event.”

HRC's YouTube page describing Lopez's alleged “export of hate” included Lopez's work contact information, according to Lopez and The Daily Signal. The information has been taken down after several weeks of being displayed.

Lopez says he and friends tagged the information as harassment, but YouTube took no action.

Since 2012, Lopez says he has faced professional and personal difficulties. University invitations were rescinded, and “the grants officer of the College of Humanities tried to block me from accessing grant money that had been given to me by outside donors.” And his campus' Associate Vice Provost has personally targeted him. Lopez writes that “she ranted at me for my alleged unscrupulousness and dishonesty.”

According to Lopez, treatment by gay rights groups “is out of control. I want the president of the United States to admonish both the HRC and GLAAD the way he stepped forward to defend Sandra Fluke. This is far worse than what happened to her.”

Lopez is not the only family advocate who says the HRC “Export of Hate” project has brought him harm. Massachusetts gubernatorial candidate Scott Lively has said he received two death threats as a result of HRC's work.

Lopez told LifeSiteNews that the experience has forced him to be creative about spreading his message. “I had to collaborate with Europeans, because GLAAD and other groups had essentially blacked me out from exposure in the U.S. Nobody would publish me or give me a space to speak publicly, except on Christian radio. In Europe, I had more leeway to engage in public discourse, so I went there.”

In describing his public policy positions, Lopez was very specific. “Same-sex couples need legal protections so they aren't targeted or harmed by society's disregard for the real emotional bond that unites them,” he said, noting his support for hospital visitation rights and for “civil unions or some kind of domestic arrangement that allows the government to affirm that there is a relationship there and these two people have built a life together.”

However, while Lopez says he “would support same-sex 'marriage,'” LGBT groups have “pulled a bait and switch on the American people and entangled marriage with a right to 'have children,' which in the gay context, means the right to acquire other people's children.”

“Same-sex 'marriage,' theoretically, does not impinge on anyone else's rights,” Lopez said. “But if you guarantee a right to children as part of marriage, now this drags in the rights of other people — there is a third-party…Not everyone gets married but every human being has a mother and father; those latter relationships are more fundamental than a spousal relationship.”

While there have been positive interactions with homosexual rights activists — Lopez says he has “had a lot of positive dialogue with gay men and lesbians who care about women's rights and children's rights” and “wrote the preface to a French book by Jean-Pierre Delaume-Myard, a gay man opposed to any gay platform that eradicates motherhood or children's rights” — he also “cannot describe the worst of the interactions because there are so many and it's been relentless. I'd have to write a three-volume epic.”

In his American Thinker piece, Lopez compared the homosexual lobby's efforts to garner rights over children to slavery.

He told LifeSiteNews, “I studied the numbers and found that there is no shortage of couples who want to adopt orphans, abandoned children, or children who have been removed from abusive homes by the state. If there is a child who doesn't have anyone to care for it, many homes with a mom and dad are available. If, theoretically, there was absolutely nobody except for two men or two women to care for such a child, who would oppose gay adoption? But that is not reality.”

Instead, said Lopez, “the reality is that gay advocacy groups are pushing for the creation of children through artificial reproduction technology and for adoption systems that give children to gay couples because the gay couples want to be parents, not because children need to be in their homes. In the end, it is money and legal possession that forces the child into an emotional relationship, a kind of captivity, under the authority of two adults who have purchased the right to control this person.”

“This is the transformation of human beings into chattel in a way we haven't seen since before slavery was abolished. I have stated many times that this isn't identical to the African slave trade, which involved far worse abuse, but there is an undeniable commonality between pre-13th-Amendment slavery and what is being advocated by groups like the Human Rights Campaign,” Lopez said.

In both slavery and modern-day efforts of the homosexual lobby, “children are being forcibly removed from their birth kin and assigned custodians through a system based on buying and selling human beings. If [gay rights groups] do not like being compared to slavers, then they should come out strong against any arrangements that involve treating human beings like commodities for sale.”

“I want to point out,” said Lopez, “that I oppose heterosexuals who do similar things to treat children like products.”

I grew up with two moms: here’s the uncomfortable truth that nobody wants to hear

Not all children raised by gay parents support gay marriage: I should know, I’m one of them
‘Angry Queers’: Christians are ‘scum,’ deserve ‘hammers through their windows’
‘Angry Queers’ smash church windows in Portland