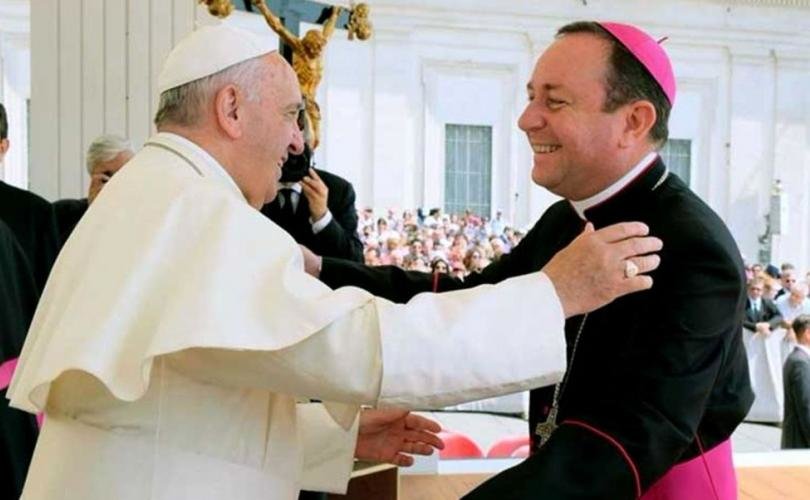 ROME, March 11, 2019 (LifeSiteNews) – An Argentinean bishop and personal friend of Pope Francis who suddenly resigned and fled his diocese after being accused of the sexual abuse of seminarians and who now holds a high-ranking post in the Vatican, is currently participating in a private spiritual retreat with Pope Francis and other senior Vatican officials, according to an article published today in the Catholic Herald.

The Herald reports that Bishop Gustavo Zanchetta, who is the former bishop of Orán, Argentina, is attending the exclusive retreat, which is being conducted for the Pope and 64 members of the Roman Curia by a Benedictine abbot at a retreat center outside of Rome. The retreat began yesterday and is scheduled to last until March 15.

The inclusion of Zanchetta in the retreat follows reports that Vatican officials, apparently including Pope Francis himself, have been aware since 2015 of well-substantiated accusations against Zanchetta of inappropriate conduct with male seminarians, as well as other forms of personal misbehavior on the part of the bishop, including his sharing naked selfies on Whatsapp showing the bishop in a posture of self-abuse.

Vatican spokesman Alessandro Gisotti has denied it was informed of the accusations in 2015, but admits that it has known of them since autumn of last year, when it says an internal investigation was begun of Zanchetta.

In addition, prosecutors in Argentina say they have opened two criminal investigations based on accusations of sexual abuse filed against Zanchetta in the province of Salta, where Zanchetta was a bishop.

Zanchetta continues to enjoy papal favor despite evidence of abuse

As LifeSite has reported previously, Gustavo Zanchetta is a personal friend of Pope Francis of many years, and was made Bishop of Orán by Francis in 2013, very soon after he became pope. Sources within the Diocese of Orán have given documents to the Argentinean media indicating they informed the apostolic nuncio and the cardinal archbishop of Buenos Aires, a good friend of Pope Francis, about Zanchetta’s objectionable behavior in 2015, and then reiterated the accusations in 2016. They again reported more accusations in 2017, when Zanchetta resigned and immediately left his diocese, taking shelter in another diocese while he waited for Rome to accept the resignation.

An Argentinean newspaper recently revealed several internal Church documents signed in 2016 by several priests attesting to Zanchetta’s misbehavior and the circumstances in which gay pornographic selfies and other pornographic images were found on Zanchetta’s smartphone. The documents indicate that Pope Francis would have almost certainly known of the accusations, and that Zanchetta was even called to Rome in 2015 to be interrogated about them.

In December 2017, a few months after his sudden resignation, which he blamed on health problems, Zanchetta was given a post in the Vatican as an “assessor” and “deputy” to the president of the scandal-ridden Administration of the Patrimony of the Apostolic See (APSA), a job that seemed to have been specifically created for him.

A clearly discombobulated Archbishop Charles Scicluna responded: “Well I’ll quote what the Holy Father said this morning about the law. About the case, I’m not, I’m not, you know, I’m not authori[zed]… I mean, yeah.” He was followed by Vatican spokesman Alessandro Gisotti, who reiterated the claim that an investigation was being conducted of Zanchetta, and added, “As you all know, we had also asked you not to ask about specific cases.”

Archbishop Scicluna then added, that he didn’t “have information about the case,” but “if somebody’s investigating a case, they’re not covering it up.”