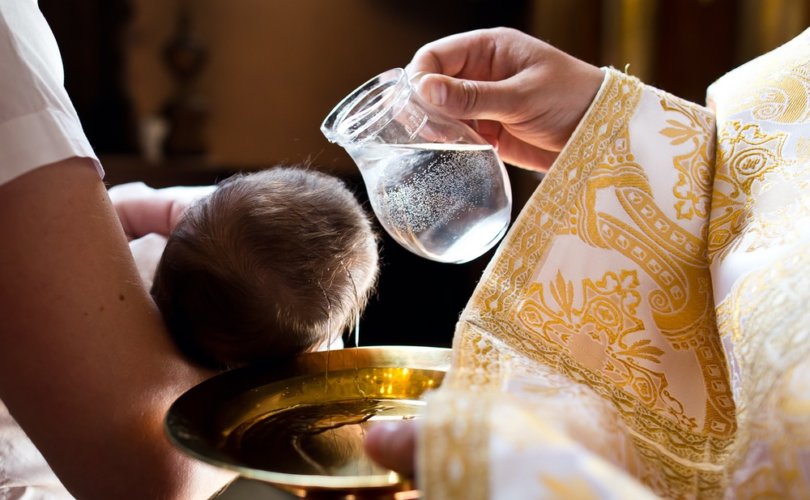 FORT WORTH, Texas, September 21, 2020 (LifeSiteNews) – Following two instances in recent weeks of “priests” who found out they were never validly baptized in the first place – and therefore they were not validly ordained priests – Bishop Michael F. Olson of Fort Worth, Texas, has issued an apology to all Catholics for ministers deviating from the proper formula for baptism.

“It is possible that we will learn that this aberrant practice of changing the valid formula for Baptism may have occurred more often than we know right now,” Olson cautioned.

Father Zachary Boazman of the Archdiocese of Oklahoma City, Oklahoma, discovered earlier this year that his “baptism,” conducted by Deacon Philip Webb in the Diocese of Fort Worth, was not a real baptism. Webb had used the words “We baptize you,” rendering the baptism invalid, instead of “I baptize you.”

Shortly after making this shocking discovery, Boazman was properly baptized, confirmed, and received Holy Communion. He was ordained both a deacon and a priest on the same day, September 12, to finally engage in parish ministry as a real priest.

The bishop of Fort Worth admitted that Boazman’s “invalid Baptism had horrible effects on the lives of those who thought that they were validly receiving sacraments administered by a man whom they thought to be a priest, and who thought himself to be a priest, but was in fact neither a priest nor even a Catholic.”

Due to the “positive and probable doubt” regarding all baptisms administered by Deacon Webb, Bishop Olson said anybody baptized (or thought to be baptized) by him needs to be conditionally baptized and conditionally confirmed.

The term “conditional” refers to the fact that it’s not a second baptism, but a first real baptism, in case the first “baptism” was actually invalid. However, a conditional baptism, if performed on a person who has already been validly baptized, doesn’t have any effect.

Bishop Olson offered some practical advice for Catholics confused about the validity of their baptisms, as well as restating the teaching of the Church on the sacraments.

“St. Thomas Aquinas consolingly reminds us that ‘God did not bind His power to the sacraments, so as to be unable to bestow sacramental effect without conferring the sacrament,’” he wrote. “Regarding Baptism specifically, the Catechism of the Catholic Church tells us (1257): ‘God has bound salvation to the sacrament of Baptism, but He Himself is not bound by his sacraments.’ God is always giving us His Grace and He will never fail us even when we fail in our stewardship of the sacraments in their appropriate celebration.”

At the same time, “Christ instituted the sacraments as the ordinary way by which God gives us His sanctifying grace and has instructed us in Sacred Scripture and Sacred Tradition in the stewardship of these treasures.”

Olson told Catholics to “presume the validity of your Baptism and the subsequent sacraments you have received unless you can establish positive and probable doubt in its validity. This means that one must have evidence (e.g., a video recording of the ceremony, an affidavit provided by an eyewitness, or the established fact of the regular and aberrant practice by a specific priest or deacon—as in the case of Deacon Webb) that his or her Baptism was not validly administered.”

If this is the case, the specific person needs to contact the parish priest, or the pastor of the parish where the baptism took place.

Olson said what all Catholics, not to mention deacons, priests, and bishops, should know, namely that baptism requires water, and the proper formula, “I baptize you in the name of the Father, and of the Son, and of the Holy Spirit.”

“I apologize to all those whose lives have been adversely affected by the discovery that the sacraments they thought that they had received they, in fact, did not receive. Our priests and deacons stand ready with me to rectify these injustices to the best of our ability.”

“I recognize that the priests and deacons who committed these grave errors of judgment did so without malice and were even attempting to do good,” Olsen said. “Nevertheless, the Church requires of her ministers not just good intentions but also sufficient knowledge of what is expected and necessary in the administration of the sacraments. Let us always bear in mind that the People of God have a right to receive the sacraments in the form that the Church has prescribed them to be administered.”

Apart from Boazman, it was Father Matthew Hood who had a similar experience in the Archdiocese of Detroit, Michigan.

Hood had watched a video of his “baptism,” realizing it was invalid.

Reflections on the necessity for widespread access to conditional baptism