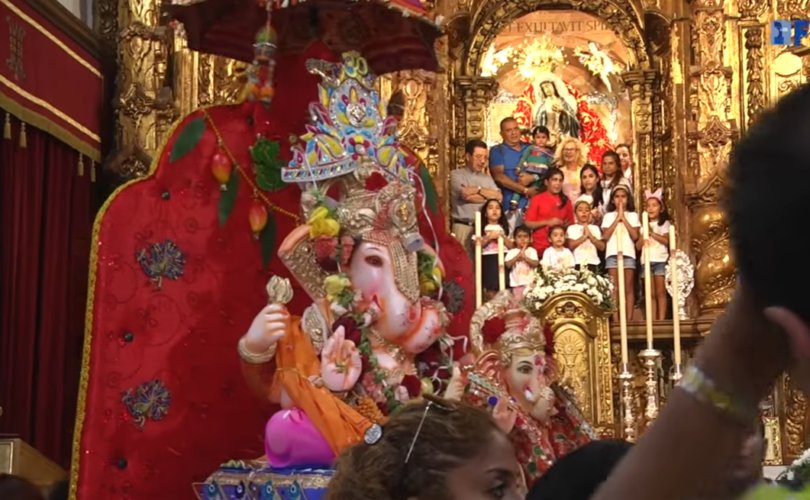 August 30, 2017 (LifeSiteNews) – A Spanish bishop apologized for an event in his diocese during which a Hindu deity was processed around a Catholic church and the priest who allowed it resigned from his position as Vicar General.

However, the bishop said Hindu beliefs don't need to be “rebuked” and that wasn't the point of his statement. It's unclear whether the priest, Father Juan José Mateos Castro, will remain in his position at that parish, Our Lady of Africa.

Bishop Rafael Zornoza Boy of the Diocese of Cádiz y Ceuta issued the apology, portions of which Crux translated.

A video of the procession shows people clapping and taking photos as the statue of Ganesh, the elephant-headed Hindu god, processed through the church past statues of Catholic saints toward the altar. It was even in front of the tabernacle at one point, which houses consecrated hosts that the Catholic Church teaches are the literal body, blood, soul, and divinity of Jesus Christ.

People inside the church sang a Marian hymn while looking at the Hindu statue.

Zornoza Boy said the event was “regrettable” and shouldn't have been allowed. He acknowledged that might have caused “pain, confusion or scandal in the Christian community.”

In the statement, the diocese says that in no case is the “love of the members of the Hindu community or their beliefs [to be] rebuked,” and they thank the Hindus for their respect.

However, the note says, the cordial relationship Catholics enjoy with Hindus and other religions present in Ceuta, “forces us to be increasingly more faithful to our Christian tradition.”

“We thank them for their respect, and reiterate our satisfaction with the cordial relationship with them and the other religious confessions in Ceuta, which forces us to be increasingly more faithful to our Christian tradition,” the statement said.

The statement also said that the vicar had been “admonished” for allowing these actions and that he’s presented his resignation, which was accepted.

Mateos [Castro], the statement said, “acknowledges that it was a mistake to allow the entrance of these images and that he didn’t intend, at any moment, to venerate anything outside of our only and true God, for his intention was only to welcome the sign of respect that the Hindu community wanted to offer towards the Christian community and the Patroness of Ceuta.”

According to the Code of Canon Law, “only those things which serve the exercise or promotion of worship, piety, or religion are permitted in a sacred place; anything not consonant with the holiness of the place is forbidden” (Can. 1210).

“All salvation comes from Christ the Head through the Church which is his Body,” the Catechism of the Catholic Church teaches (CCC 846). “Although in ways known to himself God can lead those who, through no fault of their own, are ignorant of the Gospel, to that faith without which it is impossible to please him, the Church still has the obligation and also the sacred right to evangelize all men,” it continues (CCC 848).

The Catholic Church teaches that there can be elements of truth in other religions, but they are only true because they line up with what the Church teaches (CCC 843).

In 1928, Pope Pius XI condemned the “false opinion which considers all religions to be more or less good and praiseworthy” in Mortalium Animos.

“Not only are those who hold this opinion in error and deceived, but also in distorting the idea of true religion they reject it, and little by little, turn aside to naturalism and atheism, as it is called; from which it clearly follows that one who supports those who hold these theories and attempt to realize them, is altogether abandoning the divinely revealed religion,” wrote Pope Pius XI.

“We declare, we proclaim, we define that it is absolutely necessary for salvation that every human creature be subject to the Roman Pontiff,” Pope Boniface VIII wrote in Unam Sanctum.

“Scandal is an attitude or behavior which leads another to do evil,” the Catechism says. “They are guilty of scandal who establish laws or social structures leading to the decline of morals and the corruption of religious practice, or to 'social conditions that, intentionally or not, make Christian conduct and obedience to the Commandments difficult and practically impossible'” (CCC 2284; CCC 2286).

“I am the Lord your God,” says the First Commandment. “You shall have no other gods before me.”