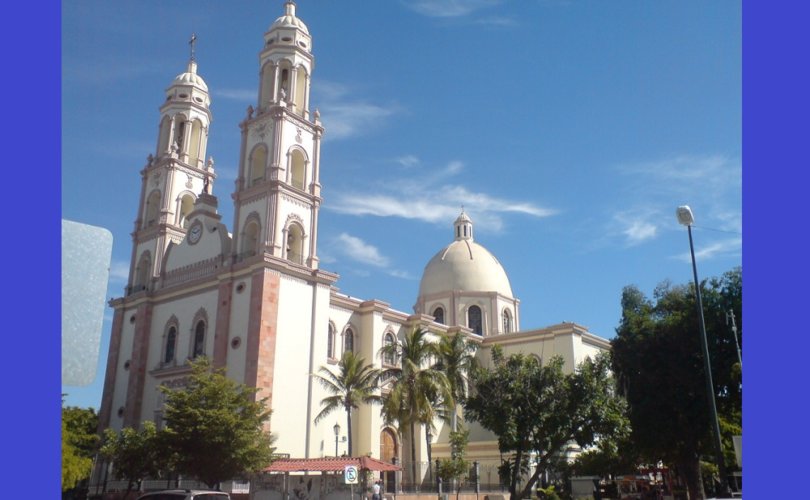 MEXICO CITY, February 6, 2020 (LifeSiteNews) — The daughter of narco-terrorist Joaquín “El Chapo” Guzmán had a private wedding Mass behind closed doors at a Catholic cathedral in Mexico.

According to Mexican daily La Reforma, Alejandrina Gisselle Guzmán Salazar, El Chapo’s eldest daughter by his first wife, was married in a lavish ceremony to Édgar Cázares at the cathedral in Culiacán, Sinaloa, on January 25 as relatives and fellow narcotics cartel members  looked on.

The historic cathedral church in Culiacán was cordoned off with yellow tape, while luxurious bulletproof vehicles brought the wedding guests. Armed men bearing automatic weapons guarded the church during the wedding. Among those reportedly in attendance was Ovidio Guzmán López, the bride’s half-brother, who was released from jail in October after his cartel’s gunmen engaged in firefights with Mexican security forces, forcing the government to let him go.

According to the report in La Reforma newspaper, Bishop Jonás Guerrero of Culiacán approved the lockdown for the nuptials, which were celebrated by a friendly priest.

Blanca Margarita Cázares Salazar is the aunt of the younger Cázares and is suspected to be a leading member of the Sinaloa narcotics cartel under its chief, Ismael “El Mayo” Zambada. Sanctioned by the U.S. Treasury Department in 2007, Cázares Salazar is known for her “sophisticated money laundering apparatus.”

As for El Chapo himself, he is currently serving a life sentence in a federal prison in the U.S. He escaped Mexican prisons twice but was ultimately extradited to serve time north of the border.

The 38-year-old bride is an entrepreneur who holds the rights to the brand name “El Chapo,” which adorns clothing and shoes. Besides apparel, she plans to use the brand to market beer. Husband Édgar Cázares is also part of the family narcotics business in Sinaloa, having ties to cartel chieftain “El Mayo” Zambada, who is joined by El Chapo’s sons in running the operation.

Politicians and ordinary Catholics were scandalized that the cathedral had been given over to known criminals.The leader of the leftist Democratic Revolution party in the lower chamber of Congress, Verónica Juárez, said the private wedding proves that powerful criminals enjoy impunity in much of Mexico. Given that local authorities knew in advance of the January 25 ceremony, she said authorities should have acted, especially because armed men were present.

Mario Delgado, who leads the ruling Morena party in the Chamber of Deputies, commented that the wedding is indicative of the power of narco-terrorists in Mexico. Delgado called for an investigation, saying the wedding should have never happened.

Sociologist Rodolfo Soriano-Nuñez, who analyzes the Catholic Church in Mexico, told The Guardian newspaper that the Church has had ties to criminal organizations for three decades. He said, “Locking down the cathedral and pretty much giving it away” is a bad look for the Church, which “forces one to raise all sorts of questions regarding the decision-making process.”

The U.S. Drug Enforcement Administration (DEA) says in its National Drug Threat Assessment 2019 that killings in the ongoing wars between the various narcotics cartels and Mexican security forces “continue to reach epidemic proportions.” The Sinaloa cartel, formerly headed by the now imprisoned El Chapo Guzmán, continues to have “the most expansive footprint” in the United States, said the report. Among the six Mexican transnational criminal organizations identified by DEA are the Jalisco New Generation Cartel (CJNG), the Beltrán Leyva organization, the Juárez Cartel, the Gulf Cartel, and Los Zetas.