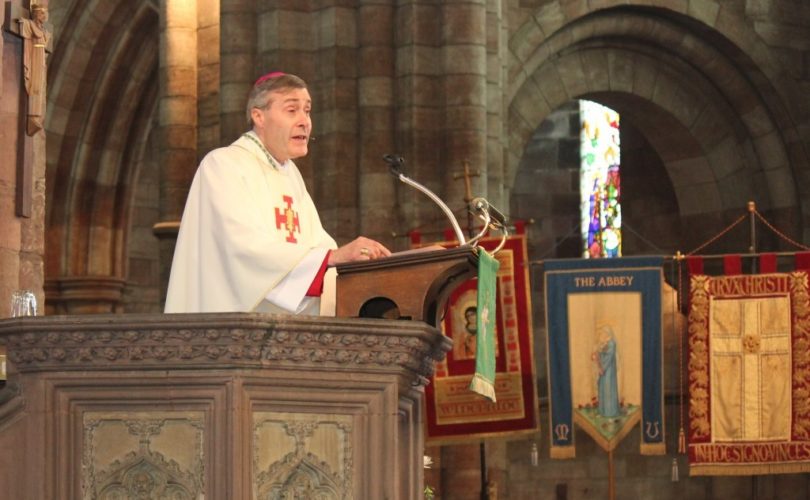 LONDON, England, September 7, 2017 (LifeSiteNews) – A Catholic bishop lauded a UK politician for speaking “fearlessly” about his Christian convictions when he offered strong support on national television for Catholic teaching on abortion and marriage.

Rees-Mogg said abortion was “morally indefensible” and that he was “completely opposed” to it in all cases, including rape and incest.

“Life is sacrosanct, and begins at the point of conception,” he stated.

Asked whether he supports same-sex “marriage,” Rees-Mogg responded, “I’m a Catholic and I take the teaching of the Catholic Church seriously.”

Pro-abortion and gay “marriage” forces and others chastised Rees-Mogg as “unsuitable for high office,” as well as “bigoted” and ”extreme,” with “utterly abhorrent” “views verging on the fascistic.”

Bishop Davies held a different view of what passes for extreme in the UK today.

“It is a mark of the extremes to which the leaders of public opinion are moving that a politician who simply accepts Christian teaching on the sanctity of human life and the identity of marriage is considered exceptional,” he said. “I think we should all be grateful for the integrity of politicians like Jacob Rees-Mogg who fearlessly speak of those Christian convictions on which our society was built.”

Bishop Davies’ public praise for Rees-Mogg’s backing of Church teaching on national TV gave Catholic Brits a second dose of faith witness from a public figure in as many days. The largely unanticipated occurrence was also significant with Rees-Mogg gaining popularity as a potential replacement for Theresa May as leader of the Conservative party.

The Society for the Protection of Unborn Children (SPUC) echoed the bishop, also noting that it was amazing for Rees-Mogg to be labeled “extreme” by such entities as BPAS (British Pregnancy Advisory Service — the U.K.’s largest abortion provider), with BPAS campaigning for abortion to be completely decriminalized and allowed up to birth for any reason.

“BPAS CEO Ann Furedi even said recently on daytime television that she supports sex-selective abortion,” SPUC communications officer Alithea Williams told LifeSiteNews. “Given that the most recent survey of British views on abortion found that 89 percent of the general population and 91 percent of women agree that gender-selective abortion should be explicitly banned by the law, it's obvious that she is the extreme one, not Mr. Rees-Mogg.”

“The same poll also revealed that 99 percent of the public oppose the abortion limit being raised to birth, which is what BPAS is campaigning for,” continued Williams, “yet they say he is out of touch with the public.”

“It tells us something that a man who's always been very open about his Catholic faith and social conservatism should make front page news for opposing abortion and same-sex marriage” Williams added, “hardly surprising stances for a Catholic to take.”