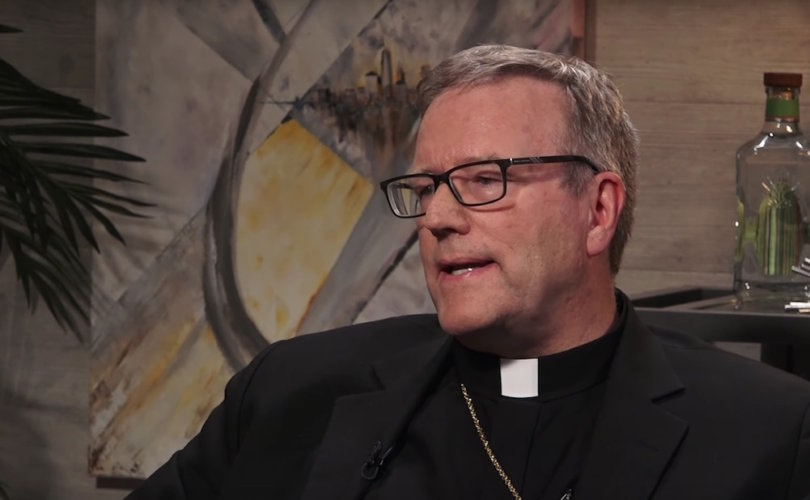 An auxiliary bishop for Los Angeles, founder of Word on Fire Ministries and hugely popular social media personality, Barron made his remarks on The Rubin Report. The show is hosted by political commentator Dave Rubin, himself in a homosexual “marriage.”

Rubin questioned the bishop on his “personal feelings” about the Supreme Court’s Obergefell ruling that legalized homosexual “marriage”: “I assume you felt it was a wrong decision by the court?”

“I do,” replied Barron. “But I don’t think I want to press it further. I think where we are right now in the States, I’ll apply the Aquinas principle. I think it would probably cause much more problems and dissension and difficulty if we keep pressing it.”

Rubin then remarked he sensed that “your heart and your spiritual sense-self maybe aren’t quite matched up,” and that Barron didn’t want to try to legislate to reverse Obergefell, but “that you can’t fully say to me, well, it’s okay.”

Barron also criticized what he sees as the Catholic Church’s approach to homosexuality.

“I said this one time, I was in New York with Cardinal Dolan actually, and we were talking to reporters,” the bishop related.

“And I said, if the only thing a gay person hears from the Catholic Church is, ‘you’re intrinsically disordered,’ we’ve got a very serious problem, if that’s what the message has become.”

“The first thing a gay person, like any person, should hear is ‘You’re a beloved child of God,’” he added.

“I agree with those, and Pope Francis has been good on this, who have said, if that’s the message that’s coming out, we were disordered, we had a problem in the way that this message was being conveyed.”

Amid concern that the bishop seemed to be capitulating to the world on homosexuality, Barron took to Facebook Wednesday to affirm his support for true marriage, but reiterated that he doesn’t support efforts to reverse Obergefell.

“I don't support same-sex marriage. My heart and mind are united on that, and there’s no confusion,” he said. “I clearly stated my opposition to it even as a married gay man sat directly in front of me.”

Barron felt compelled to clarify because “after reading a few comments, I know there’s been some confusion about one of my answers during the ‘Rubin Report’ interview.”

“What I question is the prudence and wisdom of pursuing the opposition to gay marriage right now through legislation. I believe that, given the present climate, it is best to oppose it through personal witness and education.”

Barron wrote that “placing our sex lives under the Lordship of Jesus matters. But I fear that for so many people in the secular world today, religion is reduced to the policing of sexual behavior, and this is massively unfortunate.”

He also posted a blog on his Word on Fire website, advising people not to focus on “pelvic issues.”

Joseph Sciambra, a Catholic formerly caught up in the homosexual lifestyle, issued a scathing rebuttal of the bishop’s comments.

“Would Bishop Barron get on a ‘crusader’s tank’ in order to overturn Roe v. Wade?” Sciambra wrote on his blog. “I assume he would. Why are the lives of those suffering from same sex attraction worth less? Have they not also been victimized by the culture of death?”

He likewise shredded Barron’s comments on the Catholic Church’s evangelization to homosexual persons.

“In my 18 years as an ex-gay man, I have never once met a single person who said that a priest, or anyone for that matter – in the Church, told them that they were in any way ‘disordered’,” he added.

“In truth, the principle complaints are that priests and ministries were typically overly facilitating and gay-approving.”

The “predominant message coming out from the Church on this issue” is from gay-affirmative parishes, which in many dioceses have been allowed to flourish, he pointed out.

“If the Church has been ‘disordered’ in any sense on this issue – it’s that Bishops have allowed for this confusion and open deception to continue completely unchecked.”

Sciambra also called out Barron for conflating the sexual inclination with the person.

“The first thing ‘a gay person’ should hear is that they are in reality not ‘a gay person’,” Sciambra. “You do that by simply not calling them ‘gay’.”

The charismatic and articulate Barron, who was appointed bishop by Pope Francis in 2015, is a bestselling author, television apologist and cultural and spiritual commentator.

He has often been compared to the late Bishop Fulton Sheen, and was lauded by the late Cardinal Francis George as “one of the Church's best messengers” for using new media to evangelize.

Barron’s Word on Fire website says that “next to Pope Francis, he is the most-followed Catholic leader on social media.”  The 57-year-old prelate has 100,000 Twitter followers, 1.2 million Facebook followers and his Youtube videos have been viewed over 18 million times.

Barron caused consternation in 2011 when he came out seemingly in support of the “empty hell” theory, which posits that there may potentially be no one in hell.