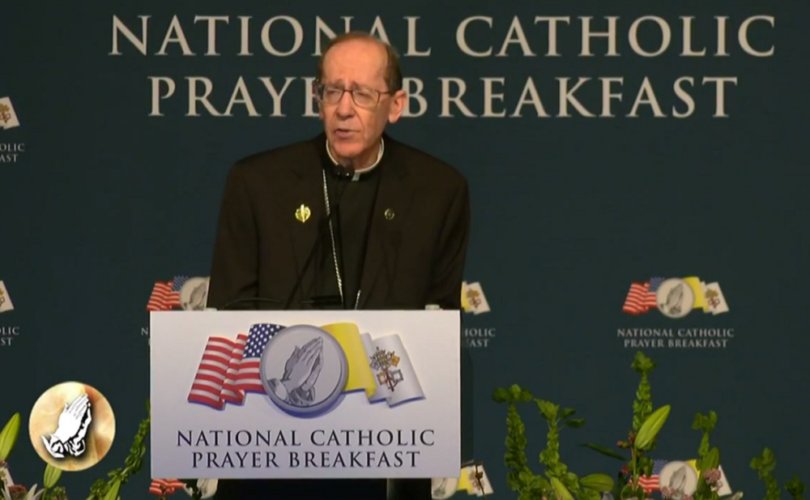 April 25, 2019 (LifeSiteNews) — Bishop Thomas Olmsted of Phoenix called upon Catholics to defend marriage and life and to fight modern heresies, even with the risk of persecution that goes along with doing so.

Speaking to the National Catholic Prayer Breakfast in Washington, D.C. Tuesday, Olmsted urged Catholic couples to go “all in” on their sacramental marriage vows and be open to life. He also said Catholics are called to stand up for unborn children at risk for abortion and criticized opposition to the Born-Alive Abortion Survivors Protection Act.

“Brothers and sisters in Christ, we can do this,” he said. “We were made for such a time as this. God destined us for these historical circumstances.”

Olmsted remarked that he was ordained a priest the same year that Roe v. Wade was passed, and that he’d been walking in its shadow in his ministry ever since.

Christ has been summoning him to speak the truth from the Vatican II document Gaudium et Spes, 51, he said, that abortion is an “unspeakable crime.”

“It is my pastoral duty to bear witness to the Gospel of Life,” stated Olmsted, “and to pray and work for a restored protection in law of the most vulnerable among us.”

Christ’s resurrection was bound to His bodiliness, Olmsted said, and that “at the center of many heresies is bodiliness.”

“This includes the current heresy,” Olmsted added, “which is embodied in the sexual revolution and now in its radicalized version, the gender ideology, as Pope Francis calls it.”

“Any rejection of bodiliness will immediately target two beautiful but demanding and sometimes inconvenient realities,” he said: “marriage and the child.”

Marriage stood in the way of the early Gnostics and other historical groups and figures, the bishop continued, listing several others, including Henry VIII and Martin Luther.

“And marriage stands now in the way of the gender ideology,” he said. “Its further weakening will do nothing to strengthen our great country.”

“We Christians, then, must stand up for this reality of marriage today in our homes and in the public square, despite the real risk of persecution by doing so.”

The child is also targeted when bodiliness is questioned, Olmsted went on, pointing out the “vociferous opposition” to the Born-Alive Abortion Survivors Protection Act.

The legislation requiring doctors to provide medical care to infants who survive late-term abortions failed in the U.S Senate, and House Republicans have tried continually to pursue a vote on it in the current session.

This “blatant disregard for a child’s life” comes from a hardened heart, Olmsted told the Catholic prayer gathering.

“Christ calls us to stand up for each child and where no human heart has been ready to receive the new life,” he said, “to allow Him to expand our own hearts to receive that child, to stand in the breach left by a hardened heart.”

He acknowledged the Catholic laity’s anger at the clergy sex abuse crisis and said the bishops owed the faithful sacrifice and appropriate action.

Olmsted said he himself also owed his flock clarity in his teaching regarding the vocation of marriage.

He stressed the importance of Catholic couples’ leadership in their family, lamenting how the U.S. birth rate dropped to record lows last year.

The bishop then quoted his apostolic exhortation for couples in his diocese, Complete My Joy, to support the teaching of Humanae Vitae.

“The disaster invited by theologians, bishops, priests and laity who rejected Pope Paul VI’s [prophetic] letter is upon us,” he said, then questioning what further evidence is needed to see that the divisions sown by the sexual revolution “are a plague of misery on a scale never known before.”

“Enough!” exclaimed the bishop. “Husbands and wives, mothers and fathers, you are called to have great hearts here, counter-cultural and brave. You can build something better, freer, more generous, and nobler, beginning in your own home.”

Christians are called not to complacency, but rather to greatness, Olmsted told the prayer breakfast, and they are called to be saints “with lives full of the Holy Spirit, women and men who live heroic virtue.”

“And you, the heads of our domestic churches, the smallest and most vital cells of the Church and of society, have as your primary responsibility to be ‘all in’ for your sacramental marriage vows,” said Olmsted.

“This entails an extra-ordinary openness to the gift of new human life,” he said, whether the child comes from the marital act or via fostering and adoption.

Olmsted concluded by exhorting the Catholics in attendance to “lead your family,” and anywhere else the Lord asks, “with deep and childlike faith in Him.”