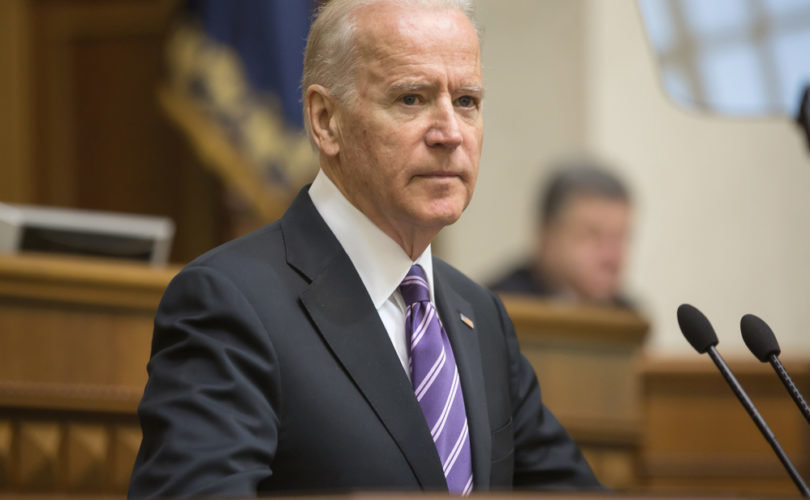 PHILADELPHIA June 11, 2019 (LifeSiteNews) – Archbishop Charles Chaput of Philadelphia rebuked Joe Biden, a Catholic who is running for the presidency, for caving into the Democratic Party’s pro-abortion doctrine when he declared that he now opposes the Hyde Amendment banning federal funds for abortion.

Biden (76), a former vice president under the country’s most pro-abortion president, Barack Obama, was once mildly supportive of the human rights of unborn children. He was among several members of Congress, including some fellow Democrats, who participated in the first pro-life marches in Washington D.C. In 1974, for instance, he said, “(W)hen it comes to issues like abortion, amnesty, and acid, I’m about as liberal as your grandmother.” In the wake of the high court’s decision in Roe v. Wade to allow abortion, he said, “I don’t like the Supreme Court decision on abortion. I think it went too far.”

Chaput took Biden to task for caving to pro-abortion forces over the course of 24 hours. While Biden once upheld the Hyde Amendment (a ban on most federal funding for paying for abortion except in cases of rape, incest or to save a mother’s life), after being slammed by campaign staffers, benefactors and pro-abortion celebrities, he reversed course.

On Thursday, Biden told Democrat donors in Atlanta that he now opposes the Hyde Amendment. He attributed his reversal to the success of “heartbeat” legislation in states such as Alabama and Georgia that recognize the humanity of the unborn and outlaw most abortions. “If I believe healthcare is a right, as I do, I can no longer support an amendment that makes that right dependent on someone's zip code.”

Biden thus joined the other Democrat presidential contenders in calling for the Hyde Amendment’s abolition. Saying that the new obstacles to abortion made necessary an alteration in his thinking, Biden said, “I can't justify leaving millions of women without access to the care they need and the ability to exercise their constitutionally protected right.”

“Happy to see Joe Biden embrace what we have long known to be true: Hyde blocks people—particularly women of color and women with low incomes—from accessing safe, legal abortion care. Thank you to our RJ partners for leading the charge in repealing this discriminatory policy,” she wrote on Twitter.

Chaput referenced in his column a 2016 speech he gave at Notre Dame University when Hillary Clinton appeared to be poised to become the next U.S. president. Chaput said then that the apparent “price” for Catholics to join the ruling class has meant “the transfer of our real loyalties and convictions from the old Church of our baptism to the new ‘Church’ of our ambitions and appetites.” Naming names, Chaput singled out Speaker of the House Nancy Pelosi, Supreme Court justice Anthony Kennedy, Sen. Tim Kaine, as well as Biden.

“They’re part of a very large crowd that cuts across all professions and both major political parties,” the Archbishop said. These are among the politicians, Chaput added, who have turned their backs on their faith, committing what Pope Benedict XVI called a “silent apostasy.” Chaput recalled that apostasy in its original Greek refers to “a means to revolt or desert; literally ‘to stand away from.”

Chaput noted that the 2016 speech angered Biden’s supporters who believe he is a moderate Democrat, a Catholic and a “well-intentioned, decent man.” Chaput asserted that Biden has now revealed what he really holds on the abortion question.

Chaput recalled a line from the classic film  ‘A Man for All Seasons,’ in which martyr Thomas More says: “‘When statesmen forsake their own private conscience for the sake of their own public duties, they lead their country by a short route to chaos.’” Chaput concluded, saying in reference to Biden possibly winning the 2020 race: “We can’t say we weren’t warned.”