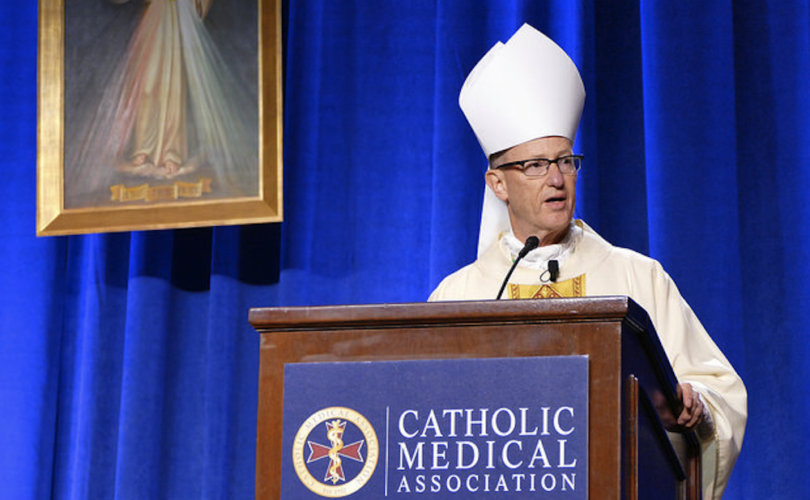 The Church’s response to those who are confused about their gender is a loving one, Conley explained, and “comes back to an anthropological, fundamental principle: What is the human person? What is a male, what is a female?”

“We have to have compassion on those who for whatever reason believe in their mind and heart that they [are] not what they were born to be, physically, biologically, but the other gender,” he told LifeSiteNews.

To “encourage” people “who persistently desire to change their gender” surgically, hormonally, or in other ways is a “disservice,” the bishop of one of the most flourishing dioceses in America said. “It’s false compassion because it’s not true.”

“What I think society is doing in this particular issue,” he explained, “is they’re showing this kind of sympathy for this person who’s struggling and instead of helping them, accompanying them, working with them, they’re just saying, OK, if that’s what you feel then I will support you. And I will help you move in that direction’ … which would be denying the truth.”

“God intends us to be” our biological sex, which “we receive at our conception,” Conley said. “We can’t change that, no matter what we believe or will or desire. We have been given that … if it’s something that we find difficult to assimilate [to] psychologically, then we have to seek help for that.”

Conley said parents whose children are confused about their gender should always respond with love.

“Make sure the child knows that they are loved,” he said. “I believe that’s part of the problem … they don’t feel loved in the body that they’re in. So they think, ‘Ah! Maybe if I change, I will be loved.’” Parents should “be patient with them and work with them and try to help them along the way.” The process of helping gender-confused children embrace the reality of their biological sex is “a long process” and “a long road” that requires patience, love, care, and hope.

“One of the tragedies, especially with gender reassignment, is that you sterilize yourself then and [remove] the possibility of ever having children, both for the male and the female. That’s pretty serious. So, again, it comes back to a misunderstanding, a confusion about the human person and the gender that God gives us at birth and the embracing of that reality. … We’ve kind of lost touch with realism … and I think it’s because we live in such a virtual society. We’re kind of led to believe that we can be whatever we want to be or do whatever we want to do, because we don’t have the real grounding in objective truth, the ‘really real.’ We’ve gotten so far away from it now.

“It’s like that Supreme Court decision in 1992, that terrible line in Planned Parenthood v. Casey … ‘we should have the right and liberty to define human existence to be whatever we want it to be.’ That’s just insane.”

Correct doctors who ‘placate the deluded’

Doctors have a special responsibility to witness to the truth of the Gospel, Conley told the hundreds of medical professionals gathered at the conference.

“Your call is to witness to the truth about the sanctity and dignity of the human person. In the face of ever more technocratic ethics, ever more determinist views of human freedom, ever less regard for the dignity of suffering, you are called to witness to this truth that life with all its challenges, all its crosses, is a gift from God and worthy of our love, care, and protection,” he said in his homily for the conference’s pro-life Mass. “You are called to tell those who call it compassion and choice to euthanize the suffering that suffering itself has dignity and meaning. You are called to tell those who placate the deluded that God has created us male and female for good reason, for our happiness and flourishing. You are called to tell those who would destroy the unborn child in the womb that every single human life has the right to life. You are empowered by God’s grace to call your profession to conversion and to offer them the mercy of God. This is what it means to fulfill our prophetic role in the world.”

“Those physicians who administer abortions or euthanasia or contraception will be called to answer for the choices they have made,” he said. “Those who pretend that our gender can be changed by sheer force of will must explain the harm they have caused. In today’s Gospel, the Lord reminds us we will each be judged. And that each must be prepared to account for the choices that we’ve made in our lives.”

‘Defies logic’ for doctors to kill rather than heal

The “multiple attacks from every which way on human life” such as abortion and euthanasia also center on anthropological questions, Conley told LifeSiteNews.

“From Revelation and the Church’s teaching, we who are believers know what human life is. And that’s not just our own definition of human life. It’s really … what human life is for everyone, because there’s only one truth,” Conley said. “We can’t all be right … human life is a gift from God, created in His image and likeness, and inherently possessing dignity and sanctity. That’s it.”

“It’s the greatest enemy of peace, and it’s the really worst thing that we do,” he said. “What is more horrifying than destroying our future? What is more brutal than taking the life of someone who’s absolutely innocent?”

“The next weakest, most dependent, indefensible, innocent” people are the elderly and the terminally ill, the bishop said. Often they can’t speak for themselves and pro-abortion logic says that they’re a burden, “they’re costly, they’re inconvenient, they’re problematic, [so] let’s find ways to compassionately eliminate them.”

Doctors are “the most credible voice” in this debate “because they are in this profession and this healing vocation … to help people in their moment of need, not to kill [them],” he said. It “just defies logic” to call physician-assisted suicide and euthanasia “compassion and choices” or “mercy killing,” Conley said.

The “divorce culture in which we live,” the pervasive cultural “contraceptive mentality,” and resulting “woundedness” contribute to the aversion some young people feel toward to marriage, Conley said.

He said young people afraid of the commitment of marriage or who don’t see the point of it should “take the long view.”

They should ask themselves, “‘What do I want to be doing 20 years from now, 25 years from now, 30 years from now? Do I wanna just still be changing partners … when I’m in my fifties and sixties? Or do I want to find someone — if I’m called to marriage — I want to be with for the rest of my life?’ [And] ‘if I find that person, then wouldn’t I want to commit to them and they to me so that we can look forward with great hope and dreams [to] a life spent together helping each other become better and become holy?’”

Young Catholics who support cohabitation and same-sex “marriage” as alternatives just as accept as marriage should “again look at the long view,” Conley said.

“Is it really true that … after thousands of years of life experience, philosophy, theology, and wisdom, both Catholic and non-Catholic … that all of a sudden in the last 20 years we’ve discovered that there’s a better way than what traditionally we’ve been handed, that is marriage between a man and woman?” Conley said they should consider.