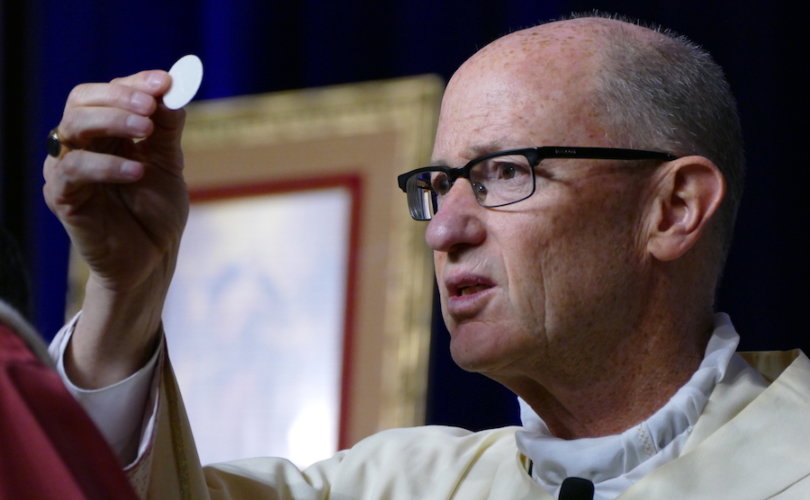 LINCOLN, Nebraska, December 13, 2016 (LifeSiteNews) – Bishop James D. Conley wrote a letter to priests of the Lincoln diocese last week telling them neither the Church's rules on Communion for the divorced and “remarried” nor the Church's stance on sexual ethics has changed. He said that just as there is confusion over Amoris Laetitia, “the history of the Church has included great theological disputes, which have been the source of division but, ultimately, have led to clarity, and to renewal.”

The letter, which is not public, was obtained by Catholic News Agency (CNA). CNA reported that the letter was dated December 5 and was distributed to priests in the Diocese of Lincoln. The letter said, “in recent weeks, some of you have asked me about media reports of controversy and disagreement about the interpretation of Amoris Laetitia.”

“Disagreement and conflict in the Church can be unsettling,” Conley explained. “Yet moments of sincere disagreement provide the occasion for the Holy Spirit to bring deeper clarity to our understanding and proclamation of the faith. The questions being posed to the Holy Father are intended to help achieve clarity.”

This seems to be a reference to the dubia of four cardinals asking Pope Francis for clarification on whether Amoris Laetitia is in line with Catholic moral teaching. After Pope Francis didn't respond, the cardinals made their questions public.

Other cardinals, theologians, bishops, scholars, and philosophers throughout the Catholic world have raised similar concerns about the controversial exhortation. Liberal prelates like Cardinals Blase Cupich and Walter Kasper have hailed it as a “game-changer” that significantly changes sacramental practice to allow what the Church teaches is sacrilege.

Conley wrote that Amoris Laetitia contains “insightful reflections on family life in the modern world, and on the meaning of mercy and charity in pastoral ministry” but also “some passages which have proven challenging to interpret and understand, especially regarding the pastoral care of Catholics who are divorced and civilly remarried, or cohabiting.”

“Sexual relationships outside the bonds of marriage constitute circumstances of grave sin,” wrote Conley. “The Lord calls those who are divorced and civilly remarried, or who are cohabiting, to continence … like every person who is conscious of grave sin, divorced and civilly remarried Catholics who engage in ongoing sexual relationships may not approach Holy Communion.”

The letter referred Lincoln priests to the Archdiocese of Philadelphia's, the Diocese of Phoenix's, and the province of Alberta's pastoral guidelines on implementing the exhortation. These guidelines, which uphold the Church's longstanding practice and teaching of not admitting to Holy Communion those whose relationships it views as objective adultery, “convey the intepretation that is to be considered normative in the Diocese of Lincoln,” wrote Conley.

Amoris Laetitia “does not repudiate the indissolubility of marriage, or the Church's moral teachings regarding divorce” or “change the Church's understanding that conscience must be formed according to truth, and that a well-formed conscience cannot guide us in a manner contrary to divine revelation,” the bishop wrote.

Conley promised his priests, “the Church is the Bride of Christ, and is protected and guided by the Holy Spirit. … We can have confidence in the enduring grace of God to lead us, as it has done in many moments of difficulty or disagreement in the Church's history. The lessons of history are that we need not be dismayed or anxious by the challenges of our own time.”