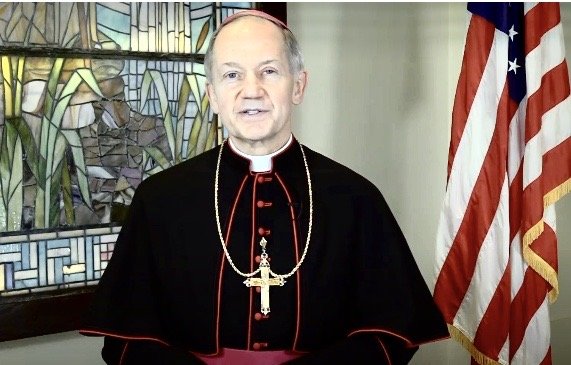 SPRINGFIELD, Illinois, September 23, 2020 (LifeSiteNews) – Bishop Thomas Paprocki last Sunday informed the faithful of his diocese that abortion is “the preeminent issue of our time” while also calling out Democratic presidential candidate Joe Biden by name for being pro-abortion.

Arguing that he “cannot endorse candidates for office,” the bishop of Springfield, Illinois, explicitly contrasted the pro-abortion platform of the Democratic Party and its candidate for President with the pro-life platform of the Republican Party and President Donald Trump.

“The platform also pledges that Democrats will appoint U.S. Supreme Court justices and federal judges who will uphold Roe v. Wade,” he added.

The bishop said Democratic presidential candidate Joe Biden and running mate Kamala Harris “support the Democratic Party Platform promoting abortion and calling for the use of federal taxpayer funding of abortion and the appointment of pro-abortion judges. Biden also pledged to restore the Obama-Biden policy that mandates churches, businesses, colleges, and religious orders like the Little Sisters of the Poor to provide coverage for abortion pills in their employees’ health insurance plans.”

On the other hand, the Republican Party Platform, which has remained unchanged since 2016, asserts “the sanctity of human life and affirm that the unborn child has a fundamental right to life which cannot be infringed.”

Paprocki said Republicans “oppose the use of public funds to perform or promote abortion or to fund organizations, like Planned Parenthood, so long as they provide or refer for elective abortions or sell fetal body parts rather than provide healthcare,” and “support the appointment of judges who respect traditional family values and the sanctity of innocent human life.”

Both President Trump and Vice President Mike Pence “promote laws that restrict abortion, oppose federal funding for abortions, and support the appointment of judges who respect the life of unborn babies.”

The bishop, coming as close to a formal endorsement as possible without actually saying it, encouraged his flock to “keep this preeminent issue in mind as you form your conscience before casting your ballot and pray for our country that we may all live the Gospel of Life.”

Throughout the video and the corresponding column, Paprocki referred to various Church documents indicating the importance of abortion for Catholics in deciding who to vote for.

One key document is the 53-page “Forming Consciences for Faithful Citizenship,” released in an updated version in 2019 by the United States Conference of Catholic Bishops (USCCB).

“The threat of abortion remains our preeminent priority because it directly attacks life itself, because it takes place within the sanctuary of the family, and because of the number of lives destroyed,” Paprocki quoted from the document.

He quoted from Pope John Paul II’s 1995 encyclical Evangelium Vitae on the value and inviolability of human life. “In the case of an intrinsically unjust law, such as a law permitting abortion or euthanasia, it is therefore never licit to obey it, or to take part in a propaganda campaign in favor of such a law, or vote for it,” the Pope asserted in that document.

Paprocki also mentioned Pope Francis, who “has called abortion a ‘very grave sin’ and a ‘horrendous crime.’ He indicated that he agreed with the U.S. bishops ‘identifying the protection of the unborn as a preeminent priority,’ according to Archbishop Joseph F. Naumann of Kansas City, Kansas, who is also chairman of the United States Catholic Conference of Bishops (USCCB) Committee for Pro-Life Activities.”

“Commenting on his region’s ad limina visit with the Holy Father last January, Archbishop Naumann also told Catholic News Service that Pope Francis was ‘stunned’ when Archbishop Naumann told him that an estimated 61 million abortions have taken place in the United States since 1973, when the U.S. Supreme Court’s Roe v. Wade decision made the procedure legal,” Paprocki added.

Fr. Frank Pavone, head of Priests for Life, said Biden’s “failure to protect the unborn puts him not only in conflict with the Catholic faith but with the Christian Gospel, the founding principles of America, the very meaning of public service, and basic human decency. You can’t kill babies, and you can’t authorize anyone else to do so.”

Fr. Stephen Imbarrato, a regular on EWTN and a member of Red Rose Rescue, explained, “Many people respond to my comments with, ‘What about Trump?’ This is not about Trump. Trump isn’t even Catholic. This is a Catholic issue. A Catholic can’t vote for Biden whether they feel in good conscience they can or can’t vote for Trump.”

In an attempt to reach out to Catholic voters across the nation, Biden’s campaign formed “Catholics for Biden” earlier this month. Pro-life priests denounced the group.

“The whole idea of Catholics for Biden is a scam,” said Fr. Michael Orsi, a former chaplain of Ave Maria School of Law in Naples, Florida, who currently serves as parochial vicar for St. Agnes Parish in the same city.

The group seeks “to gloss over his hostility to the Catholic teaching condemning abortion,” Orsi told LifeSiteNews. “It grasps onto the Seamless Garment canard and encourages voters to weigh all of the perceived ‘good things’ that the Democrats promote for social justice. The fact is that all these entitlements presume an equality in the issues. Unless a person has the right to life, all else is meaningless.”

“People who talk about ‘single-issue Catholic voting’ are setting up a straw man,” Fr. Pavone said. “We all know there are many issues. But if a candidate came along and said, ‘I support terrorism,’ voters would not ask, ‘OK, but what’s your healthcare plan?’  Certain issues disqualify candidates.”

Pro-life groups have condemned Biden and Harris as the “most pro-abortion presidential ticket in American history.”