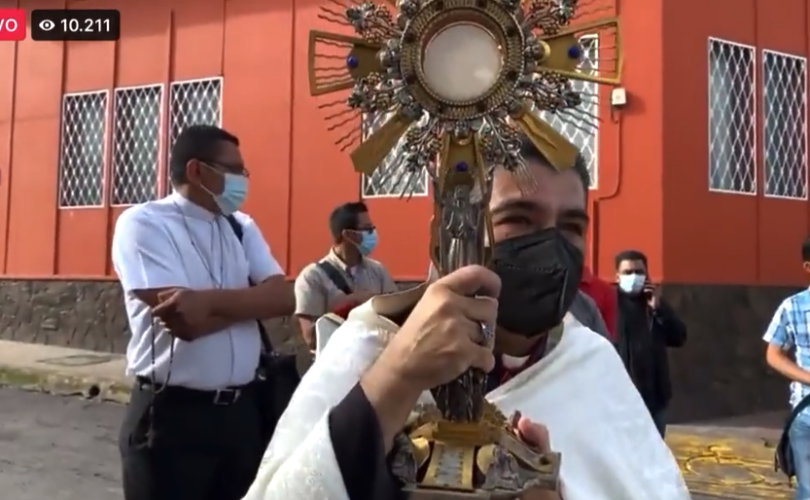 (LifeSiteNews) – Nicaragua’s national police announced an investigation into a Catholic bishop openly critical of the country’s authoritarian president for alleged incitement of “acts of hatred.”

After the forceful shutdown of seven Catholic radio stations under the oversight of Bishop Rolando José Álvarez Lagos of the Diocese of Matagalpa, National Police detained Álvarez at his diocesan chancery on Thursday and issued a statement on Friday announcing the investigation.

The statement alleged that “the Diocese of Matagalpa, headed by Bishop Rolando José Álvarez Lagos, is using media and social networks to organize violent groups, inciting them to execute acts of hatred against the population (…) with the purpose of destabilizing the State of Nicaragua and attacking the constitutional authorities.”

“The National Police, as the competent authority to guarantee peace and citizen security, have established protection measures for the population, so that these events do not happen again. Likewise, it has initiated an investigation process, with the purpose of determining the criminal responsibility of the persons involved in the commission of these criminal acts, of which the Public Prosecutor’s Office and the Judiciary have been informed,” the statement continued.

As of Tuesday, Álvarez remains under house arrest within his chancery, along with five priests and six laypeople. According to the Nicaraguan news outlet La Prensa, sources close to the bishop have confirmed that the detainees are “fine,” but shared that they have “restricted communication with the outside world to a minimum” due to concerns their phones are tapped as part of the investigation.

The police have not explained what statements by Álvarez constitute “incitement” of “violent groups” to “acts of hatred.”

The announced investigation is the latest episode in an escalating government crackdown on the Catholic Church, along with other civil institutions in Nicaragua. On June 16, United Nations High Commissioner for Human Rights Michelle Bachelet reported on the deteriorating human rights in Nicaragua, pointing to arbitrary detentions, convictions without due process, and restrictions on freedom of movement by the Ortega regime.

Bachelet shared that “since May” the Nicaraguan police have “resumed harassment of Catholic priests, persistently following and intimidating them.” She went on to report that two priests “were surrounded in their churches by police officers and parishioners were forbidden entry,” and that “the Government has also ordered the removal of the Catholic Channel from the cable television grid.”

Most recently, on August 1, the Nicaraguan telecommunications agency, TELCOR, shut down seven Catholic radio stations under Alvarez, and raided Divine Mercy Parish in Sebaco after the shutdown order was refused by Father Uriel Vallejos.

A parish lector reportedly lost an eye when he was shot with a rubber bullet by police, after Vallejos had called upon local Catholics to help protect the church.

During a “48-hour siege” that ensued, police confined Vallejos in his parish rectory until Wednesday evening, reported The Pillar. The news outlet shared that police subsequently closed access to diocesan curial buildings, and “in protest, Bishop Álvarez processed with a monstrance containing the Eucharist on nearby streets, conferring benediction upon local lay people.”

Catholic News Agency (CNA) reported that, according to the The Diocese of Matagalpa, TELCOR claimed the radio stations were closed due to a lack of valid operating licenses. However, the diocese said that in 2016, Álvarez “personally presented documentation” to request operating licenses for the radio stations, but the request “was never answered.”

On Thursday, the European Union condemned the closure of the Catholic radio stations as “arbitrary,” and having used “excessive police force.”

The EU noted that since 2018, when Nicaraguan police forces killed dozens of student protesters, and then killed 16 and injured 88 in a subsequent protest (dubbed the “Mother’s Day Massacre”), “the Nicaraguan Government has unleashed unprecedented levels of violence against its own people, using killings, forced disappearances, incarceration, harassment and intimidation against political opponents as well as journalists, human rights defenders, religious and other leaders.”

Updated records of the Inter-American Commission on Human Rights report that at least 355 people died during the government “repression of social protests over the period April 18, 2018–July 31, 2019.”

Since then, Ortega “has accused bishops of complicity and said protesters used church buildings as ‘barracks,’” according to the Manila Times, since Catholic Churches “sheltered protesters who were injured or went into hiding.”

On May 19, Álvarez denounced his own “political persecution,” sharing on a video posted to the internet that he was harassed by police who were surveilling him day and night. Alvarez said that he was followed by the police when he went to visit his niece.

“[The police] entered my circle of family privacy, they came to my private, family, paternal, maternal home, putting the safety of my family at risk” he said.