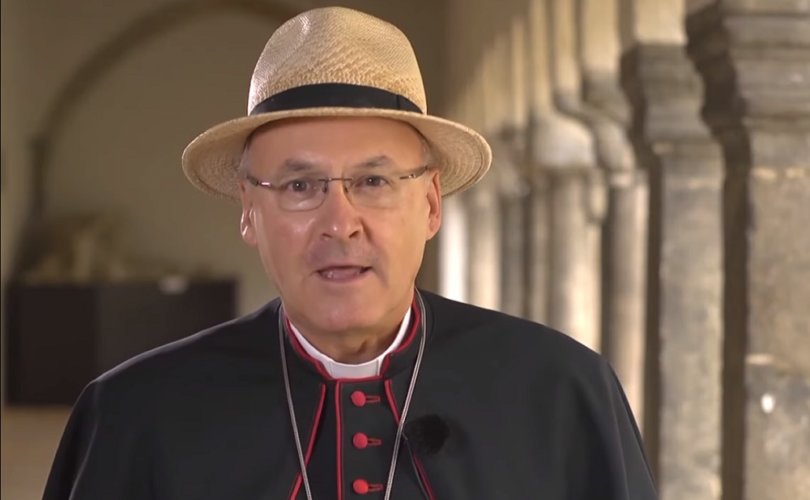 Voderholzer, the bishop of Regensburg, wrote in an open letter that he was surprised to see the document on the role of women in the Church, which will be voted on this Friday, state that Jesus Christ “has male and female disciples, ordains no one.”

“What is the point of such a statement?” Voderholzer asked. “Just as well one would have to say on this level, then: ‘Jesus does not baptize anyone, either, he does not confirm anyone, does not go to Mass even on Sundays, etc.’ The fact that the sacraments belong to the time of the Church post-Easter is obscured. But the fact that in theology there is a very differentiated reflection on the question of the institution of the sacraments is ignored.”

The synodal path is a multi-year reform process initiated by the German Bishops’ Conference and the lay organization called Central Committee of German Catholics. According to its statutes, the hand-picked participants in the synodal path discuss not only the role of women in the Church, but also sexual morality, abuse of power, and the priestly lifestyle.

After pointing out the flaw in the statement that Christ “ordains no one,” Voderholzer offered a brief but profound catechesis on how Christ called some of his followers to be apostles.

“The evangelist known as Mark uses creation terminology when speaking of the constitution of the circle of twelve! In a passage that is quite decisive for the biblical foundation of the sacrament of Holy Orders, it says in connection with the work of the pre-Easter Jesus in Mk 3:13f.: ‘Jesus went up a mountain and called to Him those whom He Himself wanted, and they came to Him. And He appointed twelve (epoiêsen dôdeka), that they might be with Him and that He might send them out …’”

“Then follows a list with the names of the twelve, whom the evangelist known as Luke then, as is well known, identifies with the apostles in the narrower sense,” Voderholzer continued. “They are also promised: ‘He who hears you hears me’ (Lk 10:16). Together with these twelve he will also celebrate the Last Supper, in the course of which, in the symbolic acts of breaking bread and raising the chalice, he anticipates without bloodshed his sacrifice of the cross and, for the time of the Church, sets up the celebration of the Eucharist as a representation of his death and resurrection.”

Voderholzer called what the drafters of the document did a “one-sided distorted biblical theology.”

The bishop emphasized that it was agreed upon on June 30 that biblical theology should not be part of the working document at all. Instead, it was supposed to be added later on.

Voderholzer said a final vote of the group focusing on the role of women in the Church was canceled for reasons of time, so he had no opportunity to express his disapproval with at least parts of the document.

“I protest against this behavior!” Voderholzer exclaimed.

Bishop Georg Bätzing, president of the German Bishops’ Conference, had to admit earlier today that Voderholzer’s remarks need to be discussed.

While not commenting on the theological propositions of the document, Bätzing said that if the group focusing on the role of women in the Church had indeed violated the statutes by not having a final vote, that would have to be corrected.

Just a few days ago, the working document of the group focusing on sexual morality was released, which proposed to redefine marriage as only one among many other ways “to live love and sexuality.”

In one section, the four-page document stated, “The openness for the passing on of life is not decisive for each individual [sexual] act, but to be affirmed in the overall course of a binding and long-term partnership.”

The document tried to rework “the concept of fertility” to include not just “the openness to new life,” but also “a social and personal dimension.” Accordingly, “[e]ven same-sex couples and other couples who cannot give birth to a new life have the potential for a fertile life.”

Due to the coronavirus crisis, the Synodal path will not meet in plenary assembly tomorrow, but in five regional conferences.