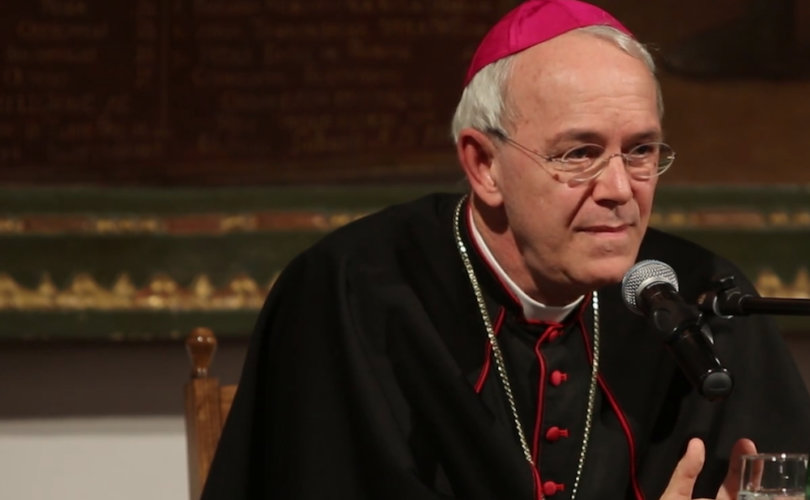 September 19, 2017 (LifeSiteNews) — In a recent interview, Bishop Athanasius Schneider said that some of the “ambiguous affirmations” in Amoris Laetitia are “causing a moral and disciplinary anarchy in the life of the Church.”

The theologian was recently fired from his university post by the Archbishop of Granada for doing so.

“The punitive measure against Professor Seifert … is not only unjust,” said Schneider, “[it] represents ultimately an escape from truth, a refusal of an objective debate and of a dialogue, whilst at the same time the culture of dialogue is proclaimed as a major priority in the life of the Church of our days.”

The very basis of unity of the Church, said Schneider, is the truth — the truth of the Gospel. Unfortunately, today whoever dares to speak the truth “is classified as an enemy of unity” — as happened to Saint Paul.

Those who are afraid of weakening Church unity by criticizing Pope Francis’ teachings must remember that the Pope is the servant of the Church, said Schneider. “He is the first who has to obey in an exemplary manner all the truths of the unchanging and constant Magisterium, because he is only an administrator, and not an owner, of the Catholic truths … ” The Pope must “constantly bind himself and the Church to obedience to God’s word,” he added.

Schneider said also that when a Pope is tolerating widespread errors and abuses, bishops should not behave like the Pope’s “servile employees.”

Bishop Schneider agrees with Seifert that Amoris Laetitia contains a “moral atomic bomb.” The document’s suggestion that an adulterous couple might be morally obliged to maintain sexual relations — sinning by not sinning — could do away with moral absolutes. Bishop Schneider recommends that others read Seifert’s contentious article, “Does Pure Logic Threaten to Destroy the Entire Moral Doctrine of the Catholic Church?”

The contrast between the past few decades’ obsession with freedom of theological thought with the current clampdown on orthodox theologians like Seifert reminds Schneider of his Communist-era boyhood. However, his thoughts more frequently returned to the Arian controversy of AD 325-381, when even a Pope sided with heretical teachings.

Finding parallels between the Arian Crisis and our times, Schneider quoted Saint Basil the Great’s description of former tumult: “Only one offense is now vigorously punished — an accurate observance of our fathers’ traditions. For this cause the pious are driven from their countries and transported into deserts. Religious people keep silence, but every blaspheming tongue is let loose” (Ep. 243).

Schneider praised the four cardinals who issued the dubia concerning Amoris Laetitia and voiced his hope that more cardinals will speak up. He had a message for all other Catholics, too: “When priests and laypeople remain faithful to the unchanging and constant practice of the entire Church, they are in communion with all the Popes, orthodox bishops and the saints of the [past] 2,000 years, being in special communion with Saint John the Baptist, Saint Thomas More, Saint John Fisher and with the innumerable abandoned spouses who remained faithful to their marriage vows, accepting a life of continence in order not to offend God.”

Athanasius Schneider, 56, is an auxiliary bishop of the Archdiocese of Astana, Kazakhstan. He has become renowned among Catholics for his defense of the family, orthodoxy and traditional worship.