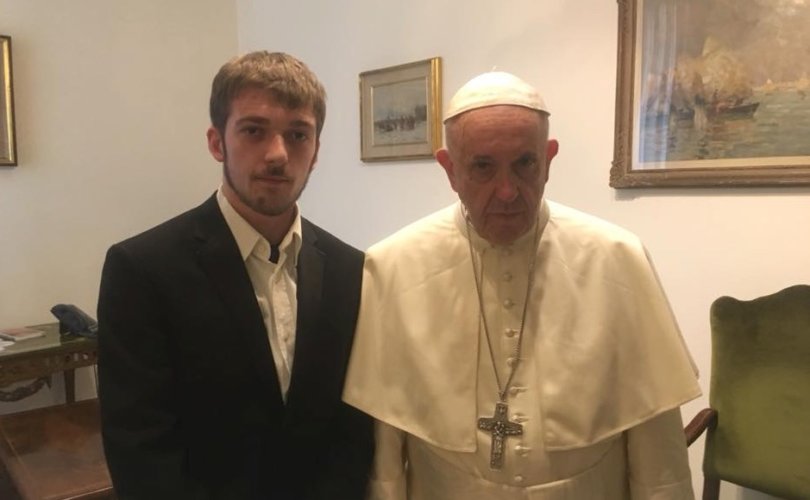 VATICAN CITY, April 18, 2018 (LifeSiteNews) – The bishop who set up the meeting between Pope Francis and Alfie Evans’ father Thomas said the Pope agreed to receive the young father at the Vatican within 20 minutes of receiving the proposal.

Francesco Cavina, the Bishop of Carfi, gave an interview to Vatican News today detailing how the headline-making meeting came about.

“The meeting was decided yesterday morning after a request was sent to me from Liverpool if it would be possible for the Holy Father to meet with Alfie’s father,” said Cavina, “because the decision of the Court of Appeal reaffirmed the decision of the first court, that is that the ventilator must be disconnected and the child should die.”

“I must say that within 20 minutes the Holy Father had expressed his desire to meet Thomas.”

The bishop described today’s meeting as being one of “great emotion” on both sides, and said that Pope Francis had praised Evans’ courage.

“At a certain point [the Holy Father] said, ‘I admire you for your courage; you are so young but you have the courage to defend the life of your son.’ And additionally at a certain point he said that the courage of this father is similar to the love that God has for human beings in that he never gives them up for lost.”

Cavina said that Evans had shared his pain with Pope Francis about not being allowed to take his son to another hospital. Evans had also told the Holy Father that judges had called his son’s life “futile”, something Francis already knew, the bishop asserted. Evans also reminded the pontiff that Alfie is a child of God.

“Thomas repeated that Alfie is a child of God and precisely because he is a child of God, he has the right–since it is God who gave him life–to ensure that God takes it from him when God believes the time has come,” said the bishop. “And that’s why [Thomas] fights; he’s ready to fight until the end.”

Cavina said Pope Francis had instructed him to be in touch with the Vatican Secretariat of State so that the Bambino Gesù hospital would do all it could to welcome Alfie there. The bishop said that there will be “difficulties.”

“It is clear that there are major difficulties from a legislative and legal point of view,” he said. “Let’s see if it is possible to overcome them.”

In blocking Alfie’s transfer, 'we are beyond all human logic'

Cavina said that if the Vatican’s diplomatic efforts did not succeed in finding willingness in the British justices and hospital, the attempt to bring Alfie to Rome would be “much more difficult.” He said that prayer was important, and that everything that had so far been achieved was the fruit of prayer.

Asked his own opinion, Bishop Cavina said he couldn’t understand why Alfie’s parents are not being permitted to bring their child to Rome.

“Humanly speaking, it seems incredible,” he said. “From the point of view of common sense, it seems to me that we are beyond all human logic. Two parents who ask to transfer their own child from one hospital to another–if not in Italy than to any other hospital in England–I don’t understand why this should be impeded. It is hard to understand something like this.”

Alfie Evans is neurologically damaged infant at the center of a dispute between his parents and the Alder Hey Children’s NHS Foundation Trust. Alder Hey wishes to remove Alfie’s breathing apparatus and commence palliative care. Alfie’s parents, Thomas Evans and Kate James, want Alfie to be transferred to the Bambino Gesù hospital. On Monday, they lost their bid at the UK Court of Appeal to have Alfie released from Alder Hey hospital.

Italian newspaper La Nuova Bussola Quotidiana has reported that Pope Francis has opened diplomatic channels “so that all initiatives be taken to transfer the child to the Bambino Gesù in Rome.”

The Catholic Bishops Conference of England and Wales seemed to have distanced themselves from both Pope Francis’s and Cavina’s remarks by releasing a statement fully supporting Alder Hey Children’s hospital and “those who are and have been taking the agonizing decisions regarding the care of Alfie Evans.”

Meanwhile, Alfie Evans will remain on life support until after the UK Supreme Court judges a fresh appeal.

The parents of Alfie Evans have petitioned the Supreme Court to overturn a decision that the child must remain in Alder Hey hospital.

On Monday, April 16, Lord Justices Davis and Moylan and Lady Justice King of the Court of Appeal in Westminster ruled that Alfie Evans is not being unlawfully detained in Alder Hey hospital. Lord Justice Davis also decided on a date for the cessation of Alfie’s life support. This date is, however, under a publication ban.

Immediately after the decision, Paul Diamond, barrister for Alfie’s parents, asked the judges for permission to appeal. They refused him permission but conceded that the parents had the right to directly apply to the Supreme Court. Lord Justice Davis gave the press permission to say that Alfie’s ventilator would not be removed until a judgement by the Supreme Court.