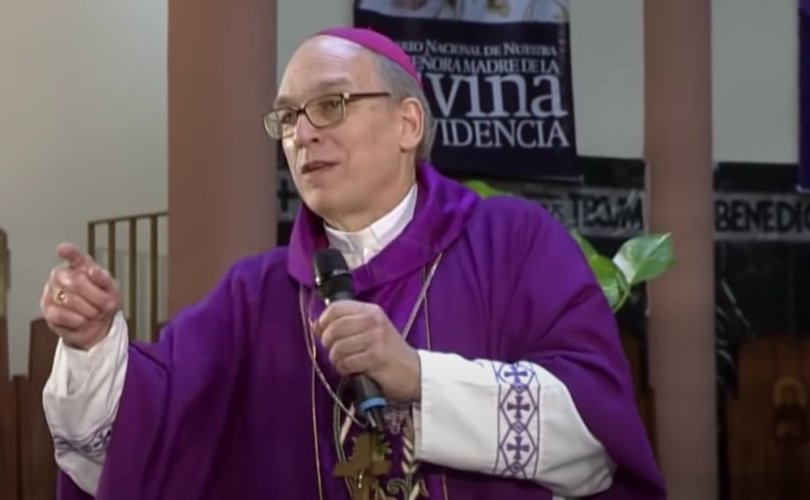 Bishop Víctor Masalles of the Diocese of Baní YouTube / screenshot

BANI, Dominican Republic, March 3, 2021 (LifeSiteNews) — The Dominican Republic will not go the way of Argentina if one determined bishop can help it. Bishop Víctor Masalles of the Diocese of Baní is organizing a “heavenly caravan for life” to shore up the nation’s traditional respect for the lives of the vulnerable. The “Caravana Celeste por la Vida” will take place on Saturday, March 27 from 9 a.m. until 1 p.m. in Santo Domingo, the nation’s capital.

Now that Argentina has legalized abortion, the Dominican Republic is one of the last four countries in Latin America to fully protect the lives of unborn children. The others are Honduras, Nicaragua, and El Salvador. However, there is pressure on the government to loosen the total ban on abortion.

Activists have used the general overhaul of the Dominican Republic’s penal code, which dates back to 1884, as their opportunity to demand legal abortion in the country. The abortion lobby wants the government to pass legislation allowing the killing of the unborn baby whose existence threatens the life of his or her mother, who was conceived in rape or incest, or who is unlikely to live for more than a month after birth.

“The government at this moment is ‘pro-choice,’” the Bishop Masalles told LifeSiteNews yesterday. “The feminist agenda has been pushed for many, many years; (they are) pushing for abortion freedom.”

Happily, the right to life from conception until natural death is preserved in the “beautiful” Constitution of the Dominican Republic, so “the constitutional court is our voice in this,” the bishop explained.

Masalles mentioned also that Catholics have been working for 20 years to keep abortion illegal — and although they have so far succeeded, pro-life people in the Dominican Republic are not certain that the total ban on abortion will be upheld.

“At this moment, the government is going to (revise) the Criminal Code without (changing the law on) abortion, but there are people who are trying to put abortion in (the revisions),” the bishop of Baní said.

“We (think) that the Congress is going to approve this Criminal Code without (legalizing) abortion, but we are not sure,” he continued. “We have to push, and that is why we are organizing that car rally. We’re trying to fundraise because all the cars and all the things we’re going to be using are going to cost a little less than $10,000, so probably $8,000 or $9,000. We need some help with this.”

The bishop is enthusiastic about the ecumenical nature of the pro-life effort in the Dominican Republic, saying that although it is unusual in Latin America for the different Christian denominations to get along, he has a good relationship with the different churches in the region.

“We have been working together for many years against abortion, so that is a beautiful thing we are seeing in the Dominican Republic: the good relationship among the churches,” Masalles said. “So we know that they are going to be coming with us, supporting the rally that we’re (having).”

The bishop believes the demonstration will show support for the members of congress who are “finally” going to sign the renewed Criminal Code — without legalizing abortion — after the 20-year delay, and counter the pressure of abortion activists.

The president of the senate, Eduard Estrella, is pro-life, Masalles said, as are most of the senators. However, there are two chambers in the congress of the Dominican Republic, and the members of the chamber of deputies, that the bishop likened to the U.S. House of Representatives, are more likely to listen to the abortion lobby.

“You never know what’s going to happen (with them),” the bishop said.

Nevertheless, Masalles remains hopeful that the chamber of deputies will pass the revised Criminal Code (without removing the abortion ban), and is certain that the senate will. The final decision, he believes, will be at the end of March or beginning of April, which is why the “heavenly caravan for life” will take place on March 27.

Although the ruling party favors the abovementioned three exceptions to the abortion law, Masalles said that it is not inclined to push for the changes, further delaying the passing of the revised Criminal Code, as they have many pressing problems, like the COVID-19 coronavirus pandemic.

“But the feminists put on a lot of pressure,” the bishop added. “That’s the problem.”

Masalles said the local abortion lobby is very small and yet has a “lot of money” and “a lot of power.” Given its small numbers, he doesn’t understand why they have “so much power.” The money usually comes from NGOs, via the United Nations, which calls abortion rights “human rights.” The ill-named organization Profamilia operates in the Dominican Republic, and it is funded by International Planned Parenthood.

“They receive more than one million dollars every year to promote abortion,” the bishop revealed.

He rejected claims by the abortion lobby that hundreds of women in the Dominican Republic die from back-alley abortions, saying they are just trying to control perceptions. “There are illegal abortions … but it is not true that many women die having abortions.”

The bishop also stated that there were not as many illegal abortions being performed as is claimed.

“The feminists use the same quantities for all the countries,” Masalles said. “They say that there are 5,000 illegal abortions every year, hidden.”

Masalles pointed out that the abortions are illegal, so it is impossible to know how many there really are. He estimated that perhaps 40 women in the Dominican Republic die at the hands of abortionists every year.

There is an institution in the Diocese of Baní, the bishop said, to help poor pregnant women prepare to have their children, accompanying them before and after the children are born. It is guided by Carmelite nuns, and Masalles lends it his support. He said that there were many other institutions like it in the Dominican Republic.

Masalles is also interested in fixing such long-standing problems in the country as pressures on girls to have sex, leading to teenage pregnancy, and brutal violence. He believes the answer lies in “socially affective education.”

“I am at this moment promoting a program to include 26,000 children in this education,” he said, adding that there should be a great social improvement in five years, including a vast reduction in the number of teenagers becoming pregnant.

“It’s proven that this program reduces by 85 percent adolescent pregnancy,” the bishop added.

The program is called “Aprendiendo a querer” (Alive to the World), which means both “learning to love” and “learning to expand your horizons.” Marsalles said that it is working in Venezuela and is also established in Hungary and South Korea. It helps young people cope with the social pressures that lead to both teenage pregnancy and violence.

“It’s about having the tools to handle the pressure and to handle the violence,” Bishop Masalles explained. “We have to educate because violence is (endemic to) the country.”

To support Bishop Masalles’ “Celestial Caravan for Life” on behalf of unborn babies and their moms, please see our new LifeFunder campaign HERE.