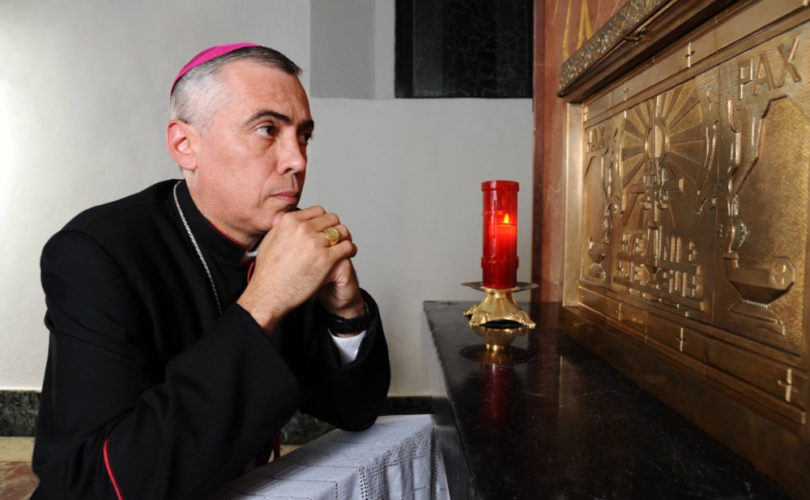 ARECIBO, Puerto Rico, March 30, 2021 (LifeSiteNews) — In an interview with LifeSiteNews, Bishop Daniel Fernández Torres of Arecibo, Puerto Rico, warned of a dangerous new attempt to criminalize what is often called conversion therapy, and with it, virtually all expression of Catholic teaching on sexuality.

Bishop Fernández Torres condemned P.S. 184, a bill proposed in Puerto Rico’s far-left Senate to ban therapies that could “change the sexual orientation or gender identity in an individual.”

P.S. 184, which mirrors recent efforts in Canada, Australia, and the U.S., targets “any effort or treatment” that would fall under a loose definition “conversion” or “reparative” therapy.

Criminalized activities include “any effort or treatment aimed at changing bodily behavior, expressions or sexual orientation of an individual, as well as eliminate or reduce romantic or sexual attractions or feelings towards individuals of the same gender.”

The restrictions in P.S. 184 nevertheless would not apply to a practice that “provides acceptance” or facilitates “exploration” of LGBT identities.

“In this sense, the only possible action allowed by law will be to support the child to live a sexual orientation or gender identity different from the natural one,” Bishop Fernández Torres said. “As written, health professionals should only take action towards affirmation of homosexuality or transgenderism in kids, even if children only were to experience temporary confusion.”

The bill would enforce the ban with penalties not just for mental health professionals, but for parents, categorizing “conversion therapy” as “abuse” alongside child sex abuse and human trafficking.

“Parents who make ‘any effort’ to reduce their children’s same-sex sexual attractions or to reduce the child’s expressions of sexual identity will be prosecuted by Law 246-2011 on child abuse,” Fernández Torres explained. He noted that Catholic parents could be faced with punishments typically reserved for crimes like child sexual assault, such as loss of custody, if P.S. 184 passes.

“What will happen to a parent who asks his son or daughter why she thinks or feels that, instead of immediately saying, ‘live as you feel or want’?” the bishop asked. “What will happen to a father who goes with his children to church, where they receive the teachings of the Catechism on the natural family and God’s creation? Will he be considered a child abuser for that?”

“It is important to understand that this definition doesn’t have anything to do with any abusive treatment, which is currently considered by law as child mistreatment without the need for approval of P.S. 184,” Fernández Torres continued.

“P.S. 184 actually will turn any parent who makes ‘any effort’ to orient their children’s sexual orientation towards their biological reality into a child abuser,” he said. “This is not about protecting children from actual abuse. This is about imposing gender ideology on children and society, and persecuting parents, health professionals, and institutions that do not agree.”

“What will happen if the child wants to go to school with a uniform of the sex different from his own?” the bishop asked. “Will the school be prosecuted for institutional abuse for making this ‘effort’ to be consistent with the school rules when treating a child according to his biological sex?”

P.S. 184 ‘does not seek to protect children from abuse’

While the bill claims that reparative therapies do not work, both research and expert opinion attest to the success of the approach for a wide range of patients. “Of the patients I oversaw who sought to change their orientation, hundreds were successful,” Dr. Nicholas Cummings, former president of the American Psychological Association (APA), has said.

Identity change among LGBT persons is actually highly common, with nearly half of people who choose LGBT sexual orientation labels switching to other ones later in life; most to “completely heterosexual,” studies have found. Conversion rates of gender-confused individuals are even higher. Gender dysphoria naturally resolves in up to 97.8% of boys and 88% of girls by adulthood, according to the APA’s most recent diagnostic manual.

“Such a success rate for any therapy is astronomically high in the field of psychology,” Dr. Anne Gillies, a Canadian trauma specialist, said about the “wait and see” approach to gender confusion. “‘Conversion therapy’ in this sense was extremely successful.”

By banning such treatments as “abuse,” P.S. 184 not only would deprive Puerto Ricans of critical therapeutic options, but could facilitate real child sex abuse.

“What makes P.S. 184 so dangerous for parents is that it does not seek to protect children from abuse,” Bishop Fernández Torres said. “Sometimes people who suffer from this confusion have stories of child abuse and rejection that might not be explored by a health professional who would be, according to this bill, only authorized by law to guide the child to live a transgender life,” he added.

LGBT identification is strongly correlated with childhood trauma, and particularly with sexual abuse. Dozens of studies have shown that adults who identify as homosexual disproportionately suffered molestation as children, at rates up to 20 times higher than those of heterosexuals in the case of same-sex abuse. If such abuse changed “bodily behavior” or “romantic or sexual attractions,” P.S. 184 absurdly would bar counselors from doing anything but providing “acceptance” for the consequences of sexual trauma.

“The active promotion of transgenderism has resulted in massive uncontrolled and unconsented experimentation upon children and adolescents,” Dr. Michelle Cretella, the head of the American College of Pediatricians, wrote in an article for LifeSiteNews. “This is child abuse.”

Moreover, though less than 2 to 10 percent of gender-confused minors may persist in gender-confusion, virtually all of those exposed to transgender affirmation move on to further medical interventions, like genital amputation. Unlike treatments that P.S. 184 would ban, these devastating practices do nothing to alleviate long-term mental health issues and suicide risks of gender-confused patients.

Health outcomes of those denied reparative therapies for homosexuality would hardly look better under P.S. 184. “Any lifestyle or decision to live against God’s desire for love inscribed in creation will lead a person down a path of suffering,” Bishop Fernández Torres lamented.

“It is well established that there are high rates of psychiatric illnesses, including depression, drug abuse, and suicide attempts, among gays and lesbians,” John R. Diggs, Jr., M.D., has said. “This is true even in the Netherlands, where gay, lesbian and bisexual relationships are far more socially acceptable than in the U.S.,” Diggs added.

The bishop pointed to the Vatican’s 2004 Doctrinal Note on the participation of Catholics in political life, which states that “it must be noted also that a well-formed Christian conscience does not permit one to vote for a political program or an individual law which contradicts the fundamental contents of faith and morals.”

The Catholic Church always has recognized homosexuality as “intrinsically disordered” and contrary to natural law, and has promulgated similar teachings about transgenderism. “They close the sexual act to the gift of life,” the Catechism says about homosexual behaviors. “They do not proceed from a genuine affective and sexual complementarity. Under no circumstances can they be approved.”

Standing up for the faith means pushing back both on P.S. 184 and on the deceptive tactics of the Puerto Rican left, Bishop Fernández Torres indicated. When asked about whether the Puerto Rican people actually back P.S. 184, he said that “supporters of P.S. 184 are, in most cases, misinformed by media exposure.”

“Instead of reporting on what the bill actually says and the laws that this bill will amend, the media discussion is mostly focused on practices which, if carried out, already constitute child abuse under current laws. This is not what the project says,” he continued.

The liberal senators who dominate Puerto Rico’s upper chamber have used comparable tactics to silence criticism of the radical P.S. 184, as evident in recent hearings.

“In light of the text of this law, do you think that if a parent opposes a minor child receiving hormone blockers, that decision of the parent … could you classify it as abuse?” Sen. Joanne Rodríguez Veve, the only senator from a pro-life, pro-family party, asked an activist who testified before the Senate in favor of P.S. 184 last week.

Sen. Vargas Vidot, one of the authors of the bill, cut Rodríguez off against Senate norms, cutting into her time. “I find it unbelievable that you intervene in my questions,” Sen. Rodríguez reacted. “That has never been done in the time that I have been here, and there is no reason to justify your determination, and I am questioning it right now,” she said.

“Is it a crime to be a Christian in Puerto Rico?” Bishop Fernández Torres asked in a letter to the Puerto Rican Senate in February. “Indeed it is when it is intended to impose, under penalty of accusations of ‘institutional abuse,’ that our religious institutions teach something that is intrinsically contrary to faith, biology and human reason.”

When it seeks to remove dissenters, who “differ from the dominant ideology, in effect, it is persecuting, imprisoning, trampling over a large sector of society for their way of thinking,” he added. “This will be the real consequence” of P.S. 184, the bishop warned.