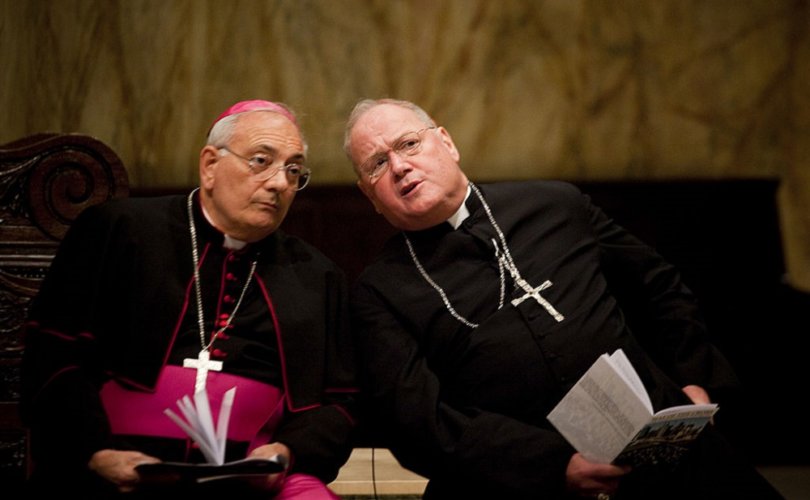 BROOKLYN, New York, November 14, 2019 (LifeSiteNews) ― A celebrated attorney has informed the Catholic Church of sex abuse accusations against the bishop of Brooklyn.

Mitchell Garabedian, internationally famous after being portrayed in the Oscar-winning film Spotlight, has revealed that one of his clients says he was sexually abused by Bishop Nicholas Anthony DiMarzio, 75, when the bishop was a parish priest in Jersey City, N.J.

On November 11, Garabedian sent a letter to the Newark, N.J. archdiocese in which he stated that Mark Matzek, 56, had alleged that both DiMarzio and another priest, the late Fr. Albert Mark, abused him in the 1970s when he was an altar server at St. Nicholas Church and a pupil at St. Nicholas School. Matzek is asking for $20 million in compensation.

Bishop DiMarzio has denied the allegation.

In a letter he published on the Diocese of Brooklyn’s web page yesterday, DiMarzio repeated what he told AP reporter Michael Rezendes, a journalist who was also portrayed in Spotlight.

“I am just learning about this allegation,” DiMarzio wrote. “In my nearly 50-year ministry as a priest, I have never engaged in unlawful or inappropriate behavior and I categorically deny this allegation.

“I am confident I will be fully vindicated.”

The bishop said also that he will “vigorously defend” himself “against this false allegation” and that he is confident that he will be “fully exonerated.”

DiMarzio, who was a consultant on the John Jay Report, described his work to make his diocese safe for children:

Sexual abuse is a despicable crime and since arriving at the diocese in 2003, I have worked and will continue to work tirelessly to purge sexual abuse from our diocese in Brooklyn and Queens. The Diocese of Brooklyn has created safe environments through sexual abuse awareness training for all children and adults who work with them. We conduct ongoing background checks on all who work with children. We have created a Victim Assistance Ministry that provides independent counseling and therapy to victim-survivors and provides numerous supports to help them with the healing process. Our Mass of Hope and Healing continues to be celebrated yearly so that as a diocese we can pray together and stand in solidarity with victim-survivors and all those impacted by sexual abuse in our Church as they seek to heal.

DiMarzio was chosen by Pope Francis to carry out an investigation into allegations of sexual abuse and cover-up in the Buffalo, N.Y. diocese. He told the AP that he concluded his apostolic visitation last month.

Siobhan O’Connor, whistleblower and former secretary to Bishop Richard Malone of Buffalo, told LifeSiteNews that although she was shocked by the allegation of abuse, she was aware that DiMarzio was already compromised as an investigator.

“I was aware of potential cover-ups under DiMarzio back in Brooklyn, which gave me great pause, but an allegation of abuse against him is a next level of concern,” she said today.

“I would argue that the apostolic visitation in Buffalo was compromised even without this allegation surfacing, but it certainly is now,” she continued.

“We'll have to wait for due process regarding that allegation, but its very existence is troubling.”

O’Connor said she had heard from a victim-survivor who “knew about DiMarzio back when he was Father DiMarzio and was not at all surprised to learn of the allegation against him.”

“Honestly, it's been a lot to process these past 24 hours,” she added.

Investigative reporter George Neumayr told LifeSiteNews that choosing DiMarzio was a mistake because of DiMarzio’s close association with the former cardinal Theodore McCarrick.

McCarrick was appointed archbishop of Newark in1986, and DiMarzio served as his auxiliary bishop from 1993 until he was named bishop of Camden, N.J. in 1999. Since then, McCarrick has been outed as a serial sexual predator, expelled from the College of Cardinals, and returned to the lay state.

“It made no sense for Pope Francis to send [DiMarzio] to Buffalo to investigate Malone, given his Uncle Ted associations,” Neumayr said.

“As an auxiliary bishop under McCarrick in Newark, he was already a compromised figure. Notice also that he was co-consecrated by McCarrick and [the late] John Smith, a … crony of McCarrick's from Trenton.”

Garabedian told the AP’s Rezendes that DiMarzio’s role in examining the Buffalo diocese abuse allegations has “tainted” the investigation.

“There needs to be a truly neutral investigator to determine whether Bishop Malone should resign,” he continued, adding that this should be a law enforcement agency.

Michael Hichborn of the Lepanto Institute agrees. He told LifeSiteNews that the allegation of child sex abuse casts doubts on DiMarzio’s reliability in investigating the Buffalo diocese.

“In the intelligence community, investigators must first undergo a background check to make sure there is nothing in their past which could act against them in the form of blackmail,” Hichborn said.

“If DiMarzio indeed has skeletons in his closet, then a new investigation must be conducted by a properly vetted, independent investigator.”

A spokeswoman for the Archdiocese of Newark acknowledged to the AP that the archdiocese had received the letter and informed police of the allegations against Bishop DiMarzio.

Mark Matzek’s claim is the latest allegation in the avalanche of accusations against priests and bishops that have come to light since Mark Rezendes and the rest of the Boston Globe’s “Spotlight” team revealed early in 2002 that dozens of priests in the Boston archdiocese had been creditably accused of sexually abusing children. Since then, thousands of allegations against Catholic priests from across the United States have been made public.

Recently, the spotlight has fallen on the Buffalo diocese, where Bishop Richard Malone is under increasing pressure to resign in the face of allegations that he covered up abuse.