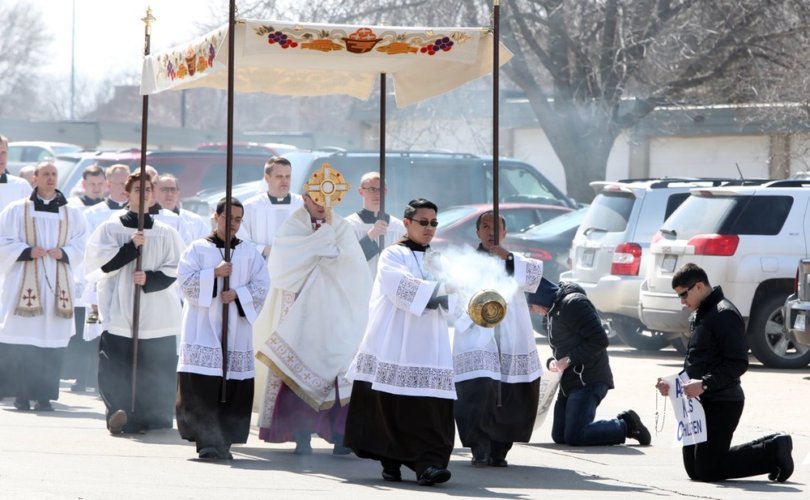 LINCOLN, Nebraska, April 3, 2018 (LifeSiteNews) – Lincoln’s Bishop James D. Conley led Catholics in praying the stations of the cross outside Planned Parenthood on Good Friday this year, just a few days after leading a Eucharistic procession around the abortion center.

Catholics believe that the Eucharist is the literal body, blood, soul, and divinity of Jesus Christ. The Church teaches that when a priest offers Mass, it is an unbloody, re-presentation of Christ’s sacrifice on Calvary.

Conley led the Eucharistic procession on Tuesday, March 27. Choir students from St. Pius X High School in Lincoln led the crowd in singing the Divine Mercy Chaplet. Aerial photos show a massive crowd that filled the street and eventually spilled onto the sidewalks in front of Planned Parenthood.

Good Friday is the one day of the year when Mass is not offered. On Good Friday, “our worship is directed, not to the unbloody sacrifice of the Mass, but exclusively to the bloody but triumphant sacrifice of Calvary,” a 1962 daily missal from the Maryknoll fathers explains. The stations of the cross are traditionally prayed throughout Lent and especially on Good Friday.

Dr. Peter Kreeft has pointed out that the words abortion advocates say – “this is my body” – are also what Christ said at the Last Supper. But Christ completed the phrase with the words, 'given for you.'

According to Dr. Peter Kreeft, “Abortion is the Antichrist’s demonic parody of the Eucharist. That is why it uses the same holy words, ‘This is my body,’ with the blasphemously opposite meaning.”

Priest for Life’s Father Frank Pavone has also reflected on this, writing, “Christ gives His body away so others might live; abortion supporters cling to their own bodies so others might die. In giving His Body, Christ teaches the meaning of love: I sacrifice myself for the good of the other person. Abortion teaches the opposite of love: I sacrifice the other person for the good of myself!”

“The same simple words are spoken from opposite ends of the universe, with meanings that are directly contrary to each other,” Pavone wrote.