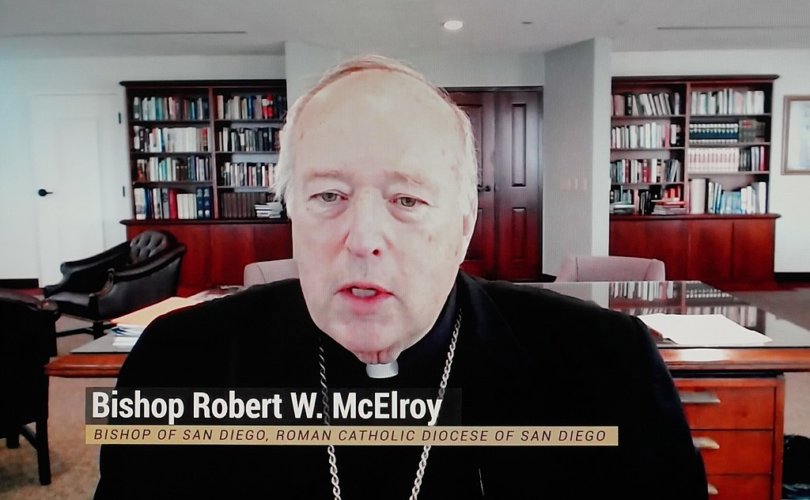 November 27, 2020 (LifeSiteNews) – Bishop Robert McElroy of San Diego recently told the dissident National Catholic Reporter that while “some voices” are urging the U.S. Conference of Catholic Bishops (USCCB) “toward a more confrontational stance toward (Joe) Biden and the new administration,” he considers that to be “contrary to the tradition of our conference” and ultimately “counterproductive.”

Instead, McElroy hopes that Catholics will be “proud collaborators” with the pro-abortion politician, particularly on addressing issues of “racial justice and division which have been so exacerbated in the last four years” and responding to the coronavirus pandemic.

McElroy delivered his comments to the Reporter after Archbishop Jose Gomez's unexpected announcement that the USCCB will form a working group to examine the “additional problems” arising from Biden’s support of abortion rights despite his professed Catholicism. According to Gomez, the president of the USCCB, this “creates confusion among the faithful about what the Church actually teaches on these questions.”

The San Diego bishop, who is on record saying “It is not Catholic teaching that abortion is the preeminent issue that we face as the world in Catholic social teaching,” told the Reporter that the bishops’ conference “should engage and mobilize with great strength and power” on abortion-related questions but insisted that the “tenor and the framework that the conference undertakes at this moment” should emphasize “the importance of dialogue, encounter, and mutual respect.”

Bishop Mark Seitz of El Paso, Texas, who shares McElroy’s opposition to “single-issue voting,” echoed this commitment to maintain a pleasant demeanor in dealings with a radically pro-abortion administration, saying, “It's always been the posture of the church that we will speak with our political leaders in a polite, mutually respectful manner.”

Both bishops emphasized that a Biden administration would advance their aims on immigration. “In San Diego, we have 200,000 undocumented men, women and children,” McElroy said. “We need to legalize these families that have been living in the shadows for 10, 15, 20 years.”

Seitz said Catholics and a potential Biden administration “can work better by our collaboration than by being apart” on immigration issues, saying, “A nation isn’t built upon people who share a common heritage, but it’s built upon a common desire to work together for respect, justice, and  peace.”

On Tuesday, Biden reiterated his commitment to “send an immigration bill to the United States Senate with a pathway to citizenship for over 11 million undocumented people in America,” reverse President Donald Trump’s executive orders that have “eviscerated” the Environmental Protection Agency, and provide “immediate assistance” to states and local governments impacted by the pandemic within his first 100 days in office.

Prior to the election on November 3, the U.S. bishops as a whole did not address Joe Biden’s anti-Catholic position regarding faith and morals. The bishops’ lack of clarity is a scandal in itself and probably contributed to the possible election of a pro-abortion “Catholic” to the presidency.

The bishops could have spoken out against Biden’s stance collectively, but they were overwhelmingly silent. Because of this, they will be at least partly responsible for the policies advanced by a Biden administration, in the event that Biden is sworn into office.

Since Archbishop José H. Gomez and the USCCB prematurely congratulated Joe Biden as “the second United States president to profess the Catholic faith,” Gomez has announced that Archbishop Allen H. Vigneron will lead a “working group” to deal with a Biden Administration.

Although Joe Biden professes to be a Catholic, he supports policies that directly oppose the teaching of the Catholic Church, including abortion, homosexual “marriage,” and transgenderism for children.

“[Biden has] given us reason to believe that he will support policies that are against some fundamental values that we hold dear as Catholics. These policies include the repeal of the Hyde Amendment and the preservation of Roe v. Wade. Both of these policies undermine our pre-eminent priority of the elimination of abortion,” said Gomez.

On November 9, Archbishop Strickland of Tyler, Texas tweeted: “A dark cloud has descended on this nation when the USCCB and Planned Parenthood speak in unison in support of a Biden-Harris administration that supports the slaughter of innocents by abortion for all 9 months of pregnancy.”

Additionally, Archbishop Samuel Aquila of Denver, Colorado and Archbishop Charles Chaput have both declared publicly that Joe Biden “should not receive Holy Communion."

Unfortunately, Cardinal Wilton Gregory of Washington, D.C. has said that he will give Holy Communion to Biden because “it’s a matter of the responsibility that I have as the archbishop to be engaged and to be in dialogue with him, even in those areas where we obviously have some differences.”

Bishop W. Francis Malooly of Wilmington, Delaware and Bishop McElroy of San Diego also congratulated Biden in statements, but they have not indicated whether or not they would administer Holy Communion to him.

The bishops should not congratulate someone who has betrayed his Catholic Faith like Joe Biden has. It's an embarrassment and a scandal.

The United States Conference of Catholic Bishops has finally spoken on Joe Biden and Kamala Harris....

Not to chastise them for their blatant anti-life, anti-family and anti-Catholic views, but to "congratulate" them on "[being elected]"!

BUT, as everyone know, the anti-Catholic Biden-Harris ticket has NOT been elected.

Please SIGN and SHARE this urgent petition to the U.S. Catholic bishops telling them to retract their premature and offensive statement on the media's call of the election in Biden's favor.

As of the launch of this petition on November 9, NOT ONE STATE has certified the election results. All of the results are tentative and many are being litigated.

So, this is not the time for the bishops to falsely assert that Biden "has received enough votes to be elected the 46th President of the United States."

That's just not true, and for the bishops to willingly play along with the media's attempt to sweep allegations of voter fraud under the rug, is shocking behavior.

And, while Joe Biden may profess the Catholic Faith, he has also stated his support for abortion, homosexual "marriage," and recently, transgenderism for children.

For bishops, therefore, to congratulate a traitor to the Catholic Faith like Joe Biden, it requires a disturbing level of arrogance and pride.

That is not to say they should stand in judgement. But to congratulate such a man, rather than chastise him, sends exactly the wrong message to the faithful, 50% of whom are believed to have supported Biden in his election bid.

Stop ingratiating yourselves to a person who is advocating mass murder! Stop congratulating this anti-Catholic "Catholic."

For goodness' sake, grow a backbone and start defending the Faith!