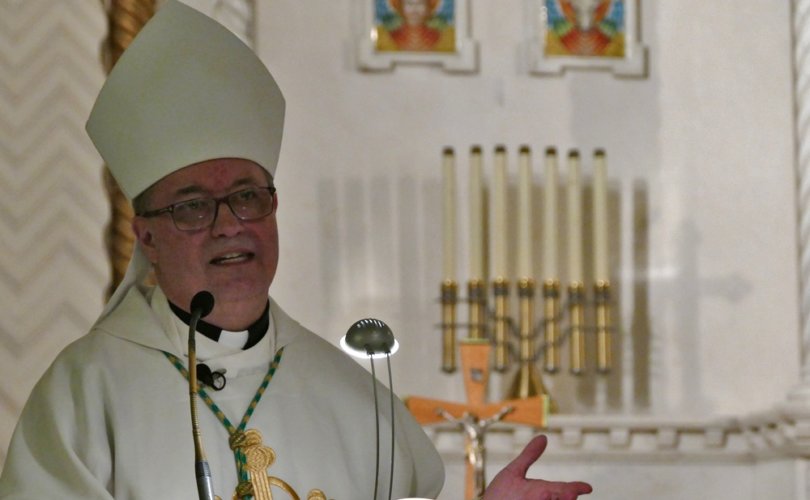 Bishop Daniel Miehm speaks at the Pro-Life Mass in Ottawa on May 9, 2018, the night before Canada's March for Life.Patrick Craine / LifeSiteNews

During Wednesday night’s pro-life Mass for the Canadian March for Life at Ottawa’s St. Teresa of the Child Jesus Parish, Bishop Daniel Miehm cited Wolf’s remarks as an example of how “the truth has a way of slipping out,” even “when much of our modern culture these days wants to deny” it.

“You probably saw on the news or social media, at the White House Correspondents’ Dinner a week or ten days ago, there was an alleged comedian, Michelle Wolf, who made some very crass or offensive remarks about abortion, in addition to a lot of other unfunny stuff,” Miehm said. “And those supposed jokes – if you saw the footage – those so-called jokes landed with a dull thud in the room, even amongst that audience where you might have expected there’d be some folks who were very much in sympathy with some of her views.”

During the dinner, Wolf said in response to Vice President Mike Pence’s belief that abortion is murder, “don't knock it 'till you try it – and when you do try it, really knock it. You know, you've really got to get that baby out of there.” The performance elicited visible discomfort from the audience.

Miehm seized upon Wolf’s use of the word “baby” to describe who exactly is killed in an abortion.

“You know, she didn’t use any other euphemism. No more neutral term like ‘the fetus.’ I’m sure it was accidental. I’m sure it was not intended,” he said. “And yet, if it was a slip, it was a telling slip because it reminds us, and it states so eloquently, that the truth of what abortion is cannot be concealed.”

“And the wondrous fact of who a baby in the womb is cannot be concealed or completely masked, because the truth is the truth,” Miehm told the crowd. “And the truth has a way of asserting itself.”

He summarized the mission of Canada's annual March for Life as “passing on the truth, the sacredness of life, with integrity and conviction.”