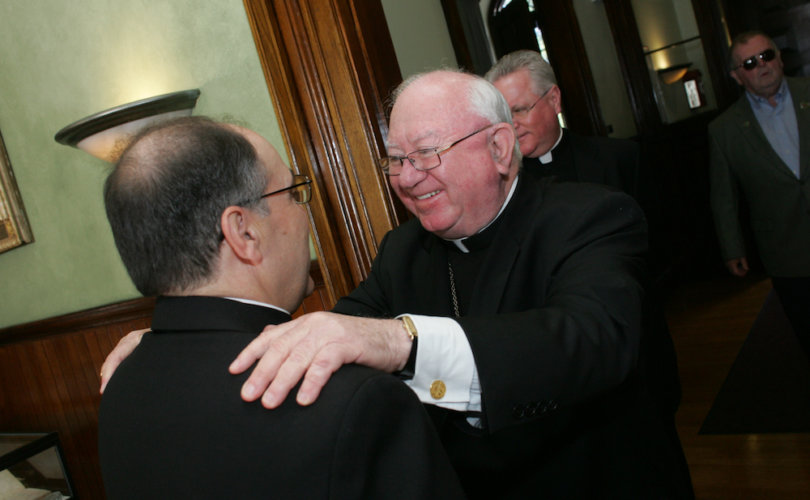 ROCKVILLE CENTRE, New York, November 2, 2016 (LifeSiteNews) – Support for abortion by candidates for public office is a deal-breaker, according to one New York bishop who said supporting abortion is “sufficient reason” on its own to disqualify them from receiving our vote.

In a recent letter, Rockville Centre Bishop William Murphy also directly shot down the “personally opposed” argument often used by pro-abortion candidates and those who support them to justify backing legalized abortion.

The October 24 letter was read at Sunday Mass in the Rockville Centre diocese this past weekend, Newsday reports.

The bishop told the area’s Catholics in the letter that while there were numerous issues pertinent to society, none overshadows the preeminence of human life.

“Many issues are very important in our society today,” Bishop Murphy wrote. “But none of them can eclipse the centrality of human life, especially innocent human life in the womb or at the end of life.”

He also re-emphasized that abortion is the biggest threat to life, criticizing government funding of it, along with government overreach in the Obamacare contraceptive mandate.

“Above all and over all, the number one issue more fundamental and crucial than any other is abortion – that is the direct taking of innocent life,” the bishop wrote, “which is financed by government funds — the diversion of our tax dollars to abortionists like Planned Parenthood as well as government insistence that we Catholics like the Little Sisters of the Poor violate our consciences to advance such programs.”

The decisions made by Catholics on Election Day are important ones, Bishop Murphy also told the faithful, and that, above all, they should pray.

“Pray before the Blessed Sacrament, pray to the Blessed Mother, pray the rosary and entrust your decision to our Lord,” he said.

He acknowledged the level of division with the election. “But as responsible citizens and faithful men and women of God, we have to exercise our right to vote in a way that is serious, well-informed and reflective of who we are as Americans and Catholics.”

Bishop Murphy told his Catholic readers he believed the country is headed in the wrong direction, asking them to ponder candidates at all levels who would continue the current course and “which are more likely to restore justice in those areas that cry out for such a restoration?”

“Which ones are willing to lead us in a direction that is more pro-life, more pro-family and more pro-truth?” he asked. “Which ones will recognize and respect the role of religion in the lives of citizens and the Church’s right to mediate the truths of the Gospel and the Church’s teaching as part of the public life of our country, in public ministries like healthcare, education and charitable works, without being forced to adopt and facilitate those cultural practices that are not consonant with Church teaching?”

Bishop Murphy was among the prelates who voiced strong support for marriage after last year’s Supreme Court Obergefell decision legalizing gay “marriage,” using the occasion to comment on the constitutionality of the Roe vs. Wade decision, stating, “We have the God-given and constitutional right to proclaim religious truths in the public square, as well as [in] our churches, just as we have been doing for almost 50 years in the ever vigilant battle against another wrongly decided decision, Roe v. Wade.”