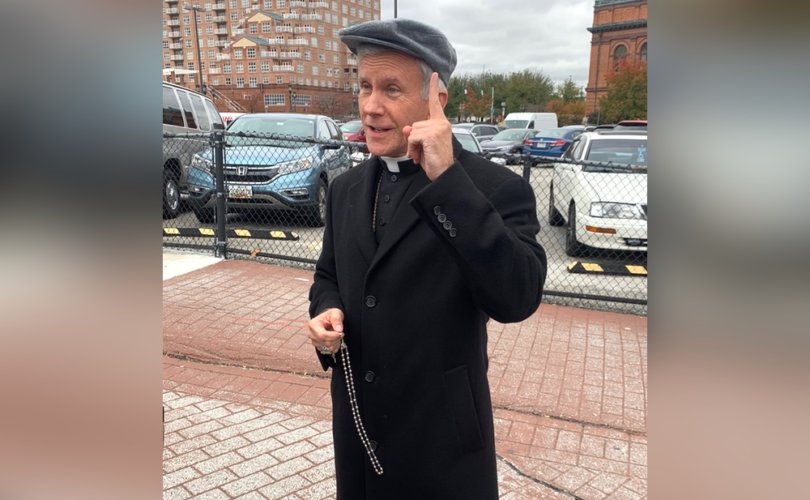 “The video of the ‘celebration’ of New York legislators as they condemned even full term unborn children to Death by Choice is a scene from Hell,” tweeted Bishop Joseph Strickland of Tyler, Texas about the expansion of abortion known as the Reproductive Health Act.

“Woe to those who ignore the sanctity of life, they reap the whirlwind of Hell.  Stand against this holocaust in every way you can,” he added in his Jan. 25 Tweet.

This is the sound from the NY Senate chamber after the 38-24 vote to:

– Add abortion to the NY Constitution

On Monday, Strickland doubled down on his original tweet, writing: “Worth repeating…again, and again and again!!!!”

As signed into law by Gov. Andrew Cuomo (D), the measure allows for abortions throughout all nine months of pregnancy. The Reproductive Health Act declares that “Every individual who becomes pregnant has the fundamental right to choose to carry the pregnancy to term, to give birth to a child, or to have an abortion.” It eliminates New York’s previous recognition of unborn babies in the womb older than 24 weeks as potential victims of homicide, allows non-physicians to carry out abortions, and removes abortion from the penal code entirely.

Bishop Strickland joined Bishop Richard Stika of Knoxville, Tennessee, in saying that Gov. Cuomo, a Catholic, deserved ex-communication for championing the law. Tweeting on Thursday, Stika wrote: “Someone asked me today if I would issue an excommunication of a Catholic Governor under my jurisdiction if the Governor did the same as in New York,” adding, “I think I might do it for any Catholic legislator under my jurisdiction who voted for the bill as well as the Governor.” On Friday, Strickland tweeted, “I’m with Bishop Stika. I’m not in a position to take action regarding legislation in New York but I implore bishops who are to speak out forcefully. In any sane society this is called INFANTICIDE!!!!!!!!!!”

Bishop Edward Scharfenberger has also stated that Cuomo’s abortion activism may result in excommunication as a “last resort.”

Archbishop of New York Cardinal Timothy Dolan, however, said on Friday via a spokesperson that excommunication is “not an appropriate response,” adding that “excommunication should not be used as a weapon.”