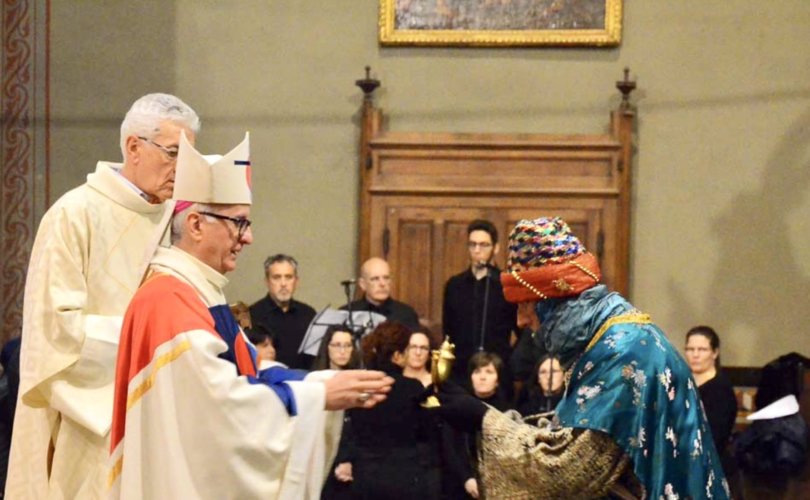 ROME, January 10, 2020 (LifeSiteNews) — A northern Italian bishop refused to openly profess the Nicene Creed on the Solemnity of the Epiphany because he said he didn’t want to offend the Orthodox, Waldensians, and unbelievers who were present in the congregation.

Bishop Derio Olivero of the Piedmontese diocese of Pinerolo announced at the end of his homily on January 6 that the profession of the Creed would be replaced with a moment of silence so that everyone could quietly recite their own beliefs.

Addressing Catholic faithful, representatives of other religious traditions, and civic authorities at what was called the “Mass of the Peoples,” Bishop Olivero said, “Since there are also non-believers, everyone will say it in silence. Those who believe can say it and those who do not believe or are of other faiths will say in silence the reasons for their belief.”

The word “Epiphany” means “manifestation.” On the Solemnity of the Epiphany, the Church commemorates the manifestation of Christ to the Magi — that is, to the Gentiles.

Several faithful who were present at the Epiphany Mass, including one who recorded the bishop’s words, told the Italian outlet La Nuova Bussola Quotidiana that his announcement was followed by an awkward silence before the Mass resumed.

Diocesan representatives sought to justify the bishop’s silencing of the Creed on grounds that it was “for the sake of better internalizing” it.

Bishop Olivero also denied any disparity between his decision and the liturgical norms of the Church, telling La Nuova Bussola through his spokesman: “This, in my opinion, does not constitute any violation of anything.”

Bishop Olivero, who serves as a member of the Italian Episcopal Conference commission for ecumenism and dialogue, further justified his decision, saying: “I respect the Missal 56 Sundays a year and I always respect the liturgy, but on the occasion of this Mass there were (members of) other confessions in the church and I thought that Catholics could say the Creed in silence and those instead, like the Waldensians and Orthodox, could proclaim something in which to believe. All in silence, but I reaffirm my absolute fidelity to the Missal.”

According to the General Instruction of the Roman Missal, “The Creed is to be sung or said by the priest together with the people on Sundays and solemnities. It may be said also at particular celebrations of a more solemn character” (n. 68).

The Instruction explains that the purpose of the Profession of Faith, or Creed, “is that the whole gathered people may respond to the word of God proclaimed in the readings taken from Sacred Scripture and explained in the homily and that they may also call to mind and confess the great mysteries of the faith by reciting the rule of faith in a formula approved for liturgical use, before these mysteries are celebrated in the Eucharist.”

In response to the bishop’s comments, La Nuova Bussola observed: “The point is not to respect the liturgy 56 Sundays a year except on Epiphany … but to always respect it, because the Catholic liturgy is not subject to the circumstances of the moment, to fashions, politics and sentiment.”

The Italian outlet also argued that Bishop Olivero “subjectivized” the faith and effectively made Catholics “renounce” their faith in the name of “ecumenism,” at the very moment they are called publicly to profess it.

Bishop Olivero has in fact shown himself to be quite supportive of diverse lifestyles.

In a February 2018 interview about Pope Francis’s summary document on the family, Amoris Laetitia, Bishop Olivero said that while “marriage is indissoluble” it is “not unbreakable.” He added that “for those who have arrived at a new union there can be a path that also comes to be fully integrated” into the sacraments.

Asked by the interviewer if he might envision these second unions being blessed, Bishop Olivero said: “In the document (guidelines) of the Piedmont Episcopal Conference this is not envisaged, but I believe it could be a good solution. Having made a proper journey, one can foresee a blessing, which means recognizing the validity of the relationship.”

“Amoris Laetitia goes beyond juridical logic,” Bishop Olivero continued. “A couple who in conscience lives the new union in all its aspects can have access to the sacraments after a proper path. This helps us to understand that the sacraments are not a reward for the good … ”

Olivero, who was appointed a bishop by Pope Francis in July 2017, said that one of the “great novelties” of Amoris Laetitia is that “it is no longer possible to say that all those who find themselves in so-called irregular situations live in mortal sin because there are many questions to analyze.”

Such irregular situations have to be evaluated “case by case,” he said.