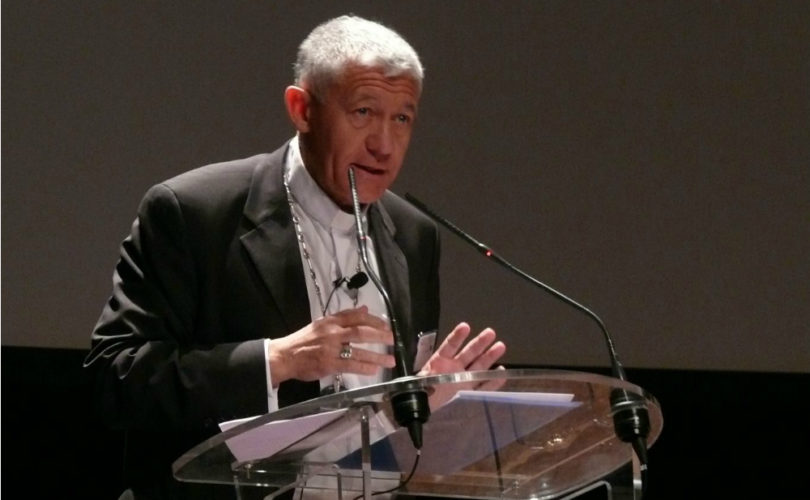 April 2, 2015 (LifeSiteNews.com) – French Bishop Luc Ravel, who oversees the Diocese of the French Armed Forces, has been ordered to remove the logo of the French Ministry of Defense from the diocese’s monthly magazine for having called abortion a “weapon of mass destruction” in last February’s edition. In a long commentary on the terrorist attacks in Paris at the beginning of this year, he spoke of the “complicated war” Christians are facing today, “trapped” as they are “between two ideologies”:

He went on to compare abortion and terrorism. The text would probably have gone unnoticed on a wide scale if a homosexual activist site, Yagg, had not published the text, available on the diocese’s website since the beginning of February, on March 16, together with a pointed commentary.

“It is up to the Ministry of Defense to determine whether denigrating equality of rights as well as women’s rights is a part of the prerogatives of the head chaplain within his mission of ‘psychological and moral support’ of the military,” Yagg wrote.

The Ministry apparently got the message loud and clear. Within days Bishop Ravel and the Diocese of the French Armed Forces were requested to remove the official logo of the Ministry of Defence on the cover of the monthly Egmil. The April edition came out on the Internet on April 1, bearing the logo of the Diocese, but the edition was not available in its printed version, said to be “out of stock.” Was the paper edition destroyed?  There has been no comment on this point.

Bishop Ravel is an outspoken man of the kind the military are most likely to respect and appreciate. Here is what he wrote about Christians being “in a no-man’s land under crossfire, crawling between landmines,” having to “arm” themselves “against obvious evil without siding with surreptitious evil”:

On the one hand, we have obvious and recognized adversaries: terrorists with bombs, the avengers of the prophet. On the other, we have adversaries who are covert but nonetheless well known: the terrorists of thought, those who impose secularism, the worshippers of the Republic.

Which side must we be on, as Christians? We refuse to be taken hostage by Islamists. But we do not want to be taken hostage by proponents of ‘correct thought’. Islamic ideology has just taken 17 lives in France. But the ideology of ‘correct thought’ takes 200,000 lives in their mothers’ wombs every year. Abortion, which has become a fundamental right, is a weapon of mass destruction. We are allied with others for France, and we must put up a solid front against explicit terrorist attacks. But that is no reason for supporting the follies of euthanasia, ‘marriage for all’ and others, including the caricatures of Charlie-Hebdo. So what should we do?

Bishop Ravel answers: “This is nothing new in history. It is a question of being one with one’s country, whilst refusing the ideologies that are just passing through. To be Russian, without being a Soviet, Chinese without being communist, German without being a Nazi.”

Comparing the annual 200,000 victims of abortion in France with January’s victims of terrorism is obviously a provocative statement in a country where the socialist powers that have worked strenuously since François Hollande came into office to legalize same-sex “marriage”, arrange for fully state-funded abortion and – in the coming months – impose euthanasia by stealth.

Bishop Ravel’s article is in no way seditious. He encourages the military always to fight for real men and women, families, and their country. In 1914, “German Catholics had to be in the German ranks and French Catholics in the French ranks,” he writes.

Nonetheless French officials have taken measures to disassociate the French army from the monthly in which Bishop Ravel writes too frankly for their comfort.

A press spokesman for the French army has commented laconically on the affair: “As texts are neither vetted nor approved by a ministerial authority, it is more simple to remove the logo. That way, the bishop will be freer to express himself.”

Bishop Ravel has decided not to comment on the affair and is carrying on with his duties as usual. He is to join French soldiers operating in the Central African Republic for the Easter Triduum.

Egmil’s editor-in-chief, Mgr Robert Poisnard, has pointed out that “Mgr Ravel’s outspokenness is not to everyone’s taste; that being said, he is only repeating Christian doctrine.” In a commentary posted on the Diocese of the French Armed Force’s website, he underlines that Egmil has never purported to be an official publication of the Ministry of Defence and even less compulsory reading matter for the military.

Ironically, on March 31 Bishop Ravel blessed a plaque remembering the 2,949 diocesan priests, 1,571 religious, 1,300 seminarians, and 375 women religious who died serving during the Great War of 1914-1918, which was inaugurated in the cathedral of Saint-Louis-des-Invalides in Paris. The ceremony took place with the approval of the military governor of the Invalides in presence of a large number of military authorities.