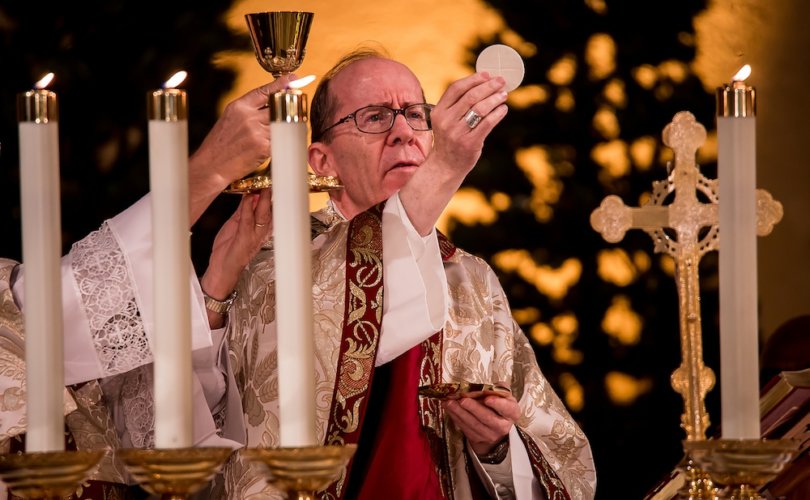 Amoris Laetitia “calls for deeper and sustained pastoral accompaniment of … suffering families,” Olmsted, the bishop of Phoenix, wrote in an article reflecting on the controversial exhortation. Pope Francis “[assures] them that they are welcome in the Church family, and that we are eager to seek ways to integrate them more fully into our local communities. … They should be encouraged to pray, attend Mass, and rectify the situation in communication with their pastor, who remains their pastor despite the case of objective sin. Accompaniment is possible and should be the case in our parishes.”

“This does not, however, include receiving Holy Communion for those who are divorced and remarried,” he noted. The bishop said Amoris Laetitia is in continuity “with the Church’s Magisterium especially that of Blessed Paul VI, St. John Paul II, and Pope Emeritus Benedict XVI which reaffirm the constant tradition of the Church.”

What Pope St. John Paul II laid out in paragraph 84 of Familiaris Consortsio is the “consistent teaching and practice of the Church,” Olmsted wrote. Paragraph 84 explains why it is incompatible with Catholic doctrine to give Holy Communion to those living unrepentantly in objectively sinful relationships. It says in part:

… the Church reaffirms her practice, which is based upon Sacred Scripture, of not admitting to Eucharistic Communion divorced persons who have remarried. They are unable to be admitted thereto from the fact that their state and condition of life objectively contradict that union of love between Christ and the Church which is signified and affected by the Eucharist. Besides this, there is another special pastoral reason: If these people were admitted to the Eucharist, the faithful would be led into error and confusion regarding the Church's teaching about the indissolubility of marriage.

In a September 5 letter to Argentine bishops, Pope Francis wrote that there is “no other interpretation” of Amoris Laetitia than one that allows Communion for the divorced and remarried. Vatican Radio confirmed the letter as authentic.