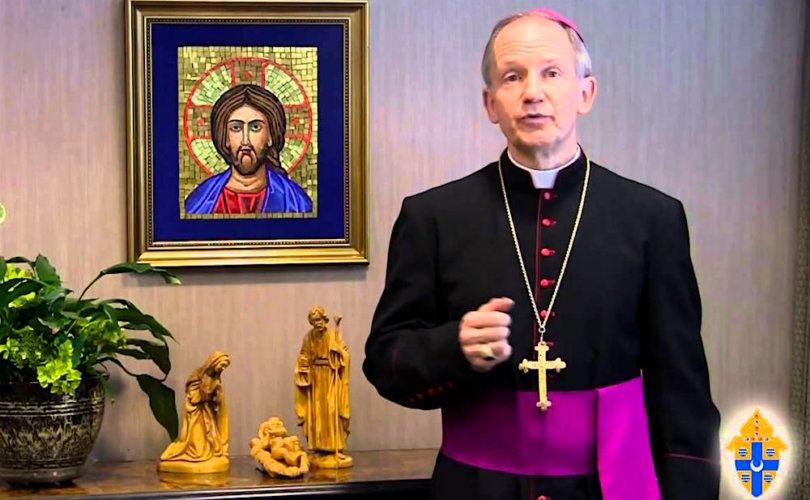 SPRINGFIELD, Illinois, June 23, 2017 (LifeSiteNews) – Those in same-sex “marriages” shouldn't present themselves to or be admitted to Holy Communion, nor may they receive a Catholic funeral if they died without showing signs of repentence, Illinois Bishop Thomas Paprocki says.

Paprocki is the Catholic bishop of Springfield, Illinois and well-known to the pro-life and pro-family movements for his defense of Catholic orthodoxy and morality.

On June 12, Paprocki signed a “Decree Regarding Same-Sex 'Marriage' and Related Pastoral Issues.” It was sent to priests and diocesan staff last week and subsequently leaked to media sympathetic with the homosexual cause.

“The Church has not only the authority, but the serious obligation, to affirm its authentic teaching on marriage and to preserve and foster the sacred value of the married state,” Paprocki explained after reminding his flock of “the clear and consistent teaching of the Catholic Church since her founding by Our Lord Jesus Christ.”

Paprocki wrote that he has a “responsibility as diocesan bishop to guide the people of God entrusted to me with charity but without compromising the truth.” Because of this, he outlined diocesan policy on issues related to same-sex “marriage,” citing the Code of Canon Law throughout.

Paprocki holds a licentiate and doctorate in canon law from the Pontifical Gregorian University in Rome, in addition to a civil law degree from DePaul University and theology degrees. (Paprocki co-founded the South Chicago Legal Clinic to offer legal services to the poor when he was a parish priest.)

No diocesan facilities – such as parishes, schools, or “dedicated, consecrated or used for Catholic worship” – are to be “used for solemnization or blessing of same-sex marriages or hosting of receptions for these events,” Paprocki instructed. Priests and diocesan employees are not to assist at or solemnize same-sex “weddings.” Doing so could result in “just punishment” for them.

Citing Canon 915 and 916, Paprocki wrote, “Given the objectively immoral nature of the relationship created by same-sex marriages, persons in such unions should not present themselves for Holy Communion, nor should they be admitted to Holy Communion.”

Canon 915 says that those “obstinately persevering in manifest grave sin are not to be admitted to Holy Communion.”

Canon 916 instructs Catholics conscious of grave sin not to “receive the body of the Lord without previous sacramental confession.”

Paprocki instructed his priests to privately meet with people living in such situations, “calling them to conversion.” They can receive Holy Communion after they have been “restored to Communion with the Church through the Sacrament of Reconciliation.”

In the case of someone in a same-sex “marriage” in danger of death, he or she may be given Holy Communion as part of Viaticum (the Last Rites) provided he or she “expresses repentence for his or her sins.”

Paprocki's instructions also outlined how to deal with the reception of the sacraments for children whose parent or guardians are living in a same-sex relationship. If there is “well-founded hope that he or she will be brought up in the Catholic faith,” it's okay to baptize him or her. Pastors should “use due discretion in determining the appropriateness of the public celebration of the baptism.”

Children living with same-sex couples may receive First Holy Communion and Confirmation provided they are “otherwise qualified and properly disposed.”

They won't be denied admission to Catholic schools or catechetical programs, Paprocki said, but the children will be taught “according to the Church's teachings on marriage and sexuality.” So “parents or those who legally take the place of parents” should be aware of this if they choose to enroll their children in diocesan schools. They must agree to follow the Family School Agreement.

Those who have publicly entered same-sex “marriages” may not be Baptism or Confirmation sponsors. They are not to receive the sacrament of Confirmation unless they have “withdrawn from the objectively immoral relationship.” They are also not to serve in “public liturgical ministry,” like being a reader at Mass or extraordinary minister of Holy Communion.

The risk of 'public scandal'

“Unless they have given some signs of repentence before their death, deceased persons who had lived openly in a same-sex marriage giving public scandal to the faithful are to be deprived of ecclesiastical funeral rites,” the letter continues. “In case of doubt, the proper pastor or parochial administrator is to consult the local ordinary, whose judgment is to be followed (cf. c. 1184).”

It was this section in particular to which the liberal media drew attention.

Unless they gave some signs of repentance before death, the following must be deprived of ecclesiastical funerals:

2/ those who chose the cremation of their bodies for reasons contrary to Christian faith;

3/ other manifest sinners who cannot be granted ecclesiastical funerals without public scandal of the faithful.

The Catechism of the Catholic Church defines scandal as “an attitude or behavior which leads another to do evil” (CCC 2284).

“Two persons in an active, public same-sex relationship, no matter how sincere, offer a serious counter-witness to Catholic belief, which can only produce moral confusion in the community,” wrote Philadelphia Archbishop Charles Chaput. “Such a relationship cannot be accepted into the life of the parish without undermining the faith of the community, most notably the children…those living openly same-sex lifestyles should not hold positions of responsibility in a parish, nor should they carry out any liturgical ministry or function.”

Chaput's guidelines also instructed priests that those actively participating in adultery – another sexual union the Church labels immoral – are not to receive Holy Communion.

If bishops ban members of same-sex couples from funeral rites, they must also ban divorced and remarried Catholics without annulments….

“When you're so liberal that you accidentally wrap around to being conservative again,” one commenter posted.

Martin went on to release a storm of tweets suggesting Paprocki's guidelines should ban from Catholic funerals women who have given birth out of wedlock, people who haven't been “forgiving,” and people who don't respect the environment. He did not appear to make a distinction between a person committing, and then repenting, of a sin like fornication versus continually and publicly living in defiance of Church teaching on homosexual activty.

He also tweeted links to statements from New Ways Ministry and Dignity USA, two groups that reject Catholic teaching on sexuality. The New Ways Ministry post went as far as to suggest that Catholics who “deny climate change” ought to be denied funerals under Paprocki's reasoning. It also said that Paprocki's upholding of Church teaching was telling employees not to “adhere to a most fundamental church teaching and follow their properly formed consciences.”

“Paprocki’s decree is not aimed at a category of persons (homosexuals, lesbians, LGBT, etc., words that do not even appear in his document) but rather, it is concerned with an act, a public act, an act that creates a civilly-recognized status, namely, the act of entering into a 'same-sex marriage,'” Peters explained. “That public act most certainly has public consequences, some civil and some canonical.”

Paprocki's former secretary was murdered by a gay activist after she suggested he change his lifestyle.

Bishop tells hostile crowd at gay marriage debate: my secretary was murdered by a gay activist