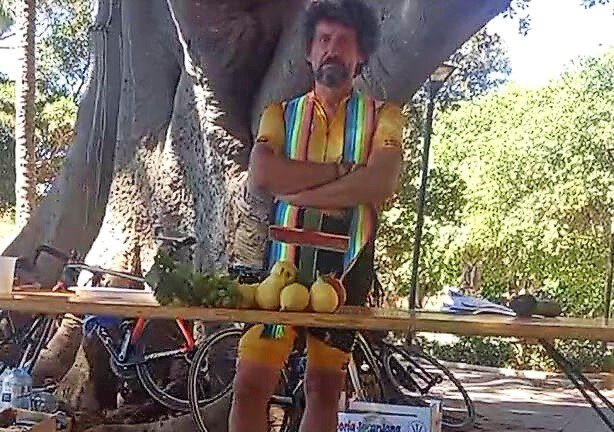 BRESCIA, Italy (LifeSiteNews) – Bishop Pierantonio Tremolada of Brescia, Italy rebuked Father Fabio Corazzina for a sacrilegious Mass he celebrated wherein the Eucharist was blown off the table-altar by a gust of wind while the priest dawned skin-tight cycle shorts and an LGBT pride stole.

Bishop Tremolada sent Corazzina a letter, an image of which was obtained and published by Italian Catholic blog MessaInLatino.

Tremolada stated, “I consider very serious what happened … the clothing, the way of dealing with the sacred species, the freedom in formulating the orations and the Eucharistic prayer itself.”

He also chastised Corazzina for his “inappropriate and unfortunate jokes.”

“I am amazed,” he said “that you have not thought about the consequences of such an act, moreover an act that was intentionally brought to public attention through social media.”

The bishop went on to question Corazzina’s failure to “realize the shock and pain it would have caused – and in fact has caused – in so many people who deeply love the Eucharist.”

He told the parish priest that Mass must be celebrated with “a heart that is grateful and before that, admiring” and called the Eucharist “the most precious asset the Church possesses.”

His excellency told Corazzina to “make amends and humbly apologize” in a public fashion for the grave abuses he committed.

Tremolada wrote that Corazzina must “choose a penitential gesture which expresses awareness of your responsibility and in some way intervenes to repair what has happened.”

Corazzina is the second Italian priest to be caught performing a sacrilegious Mass this summer.

Fr. Mattia Bernasconi of Milan, Italy enraged faithful Catholics when photographs of him offering Mass shirtless while wading in the sea in Crotone surfaced on social media.

Bernasconi’s diocese did not publish any mention of disciplinary action against the priest, but the public prosecutor’s office in Crotone, Italy considered leveling an “offense of a religious denomination” charge against the priest.