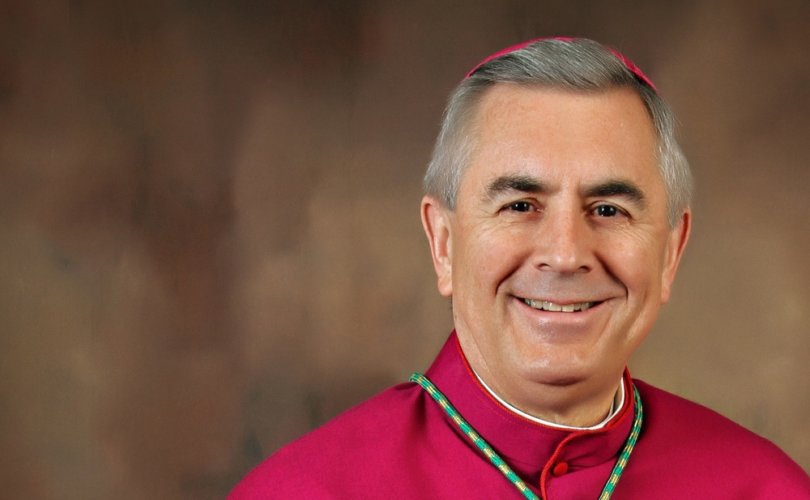 HARRISBURG, Pa., August 1, 2018, (LifeSiteNews) – The Bishop of Harrisburg has ordered that the names of his six predecessors dating back to 1947 be removed from any building, facility, or room in the diocese for their failure to protect children from sexual predators wearing a collar.

“I have directed that the names of every bishop since 1947, the beginning date of the Grand Jury’s investigation, be removed from any building facility, or room in the diocese,” said Harrisburg Bishop Ronald Gainer at a press conference this morning.

Former bishops of Harrisburg whose names will be removed throughout the diocese include:

Bishop Gainer also released the names of 71 accused sex-abusers, the majority of them in his diocese. The names were released prior to the Pennsylvania Attorney General’s soon-to-be-released bombshell report on clergy sexual abuse in six of the state’s dioceses.

The bishop said that “anyone who has been accused of sexual misconduct … will have his name removed from any place of honor throughout the Diocese.”

“In my own name and in the name of the Diocesan Church of Harrisburg, I express profound sorrow and I apologize to the survivors of child sex abuse, to the Catholic faithful and to the general public for the abuses that took place and for those church officials who failed to protect children,” he said.

“The information we are releasing today regarding child sexual abuse and the diocese of Harrisburg, details some very sad moments in our history,” he said.

Of the 71 names, 37 were priests of Diocese of Harrisburg, three were deacons of the diocese, six were seminarians, nine were priests from other dioceses, and 16 were from religious communities” tweeted PennLive reporter Ivey DeJesus.

Of the 71 names, 37 were priests of Diocese of Harrisburg, three were deacons of the diocese, six were seminarians, nine were priests from other dioceses, and 16 were from religious communities.

Gainer no doubt senses the growing public frustration over long-festering accusations and rumors of sexual abuse––often predatory and sometimes pedophilic or pederastic––leveled against priests and prelates.

The pending issuance of the state attorney general’s report comes amid the still unfolding story of disgraced Cardinal Theodore McCarrick, whose abuse of seminarians and other young men and boys continued for decades, seemingly unchecked by his brother prelates.

Publication of the massive report detailing the findings of the two year grand jury investigation into sexual abuse by priests in Pennsylvania currently remains on hold as individuals cited in the report seek to block its release.

The nearly 900 page document zeroes in on allegations over several decades of sexual misconduct in the dioceses of Allentown, Erie, Greensburg, Pittsburgh and Scranton, in addition to Harrisburg, and is expected to reveal widespread abuse.  Similar investigations of the dioceses of Altoona-Johnstown and Philadelphia were conducted previously.

Hundreds of priests, as well as other diocesan employees, are expected to be named.

Victim advocates have suggested this will be the most exhaustive examination by any state of clergy abuse.

“It’s going to be a devastating report for the Catholic Church and it’s going to point out not only the extent of sexual abuse of children but the massive cover-up by the hierarchy,” predicted Robert Hoatson, president of the group Road to Recovery, according to a Pittsburgh Post-Gazette report.

“We have found that there was an ongoing pattern of cover-up, basically, by the diocese,” attorney Alan Perer told Pittsburgh’s CBS affiliate.  Perer has represented the alleged victims of priests of the Pittsburgh diocese.

“This could open the doors to really finding out the truth about what happened over the years, and what the diocese response was to these abusive priests,” said Perer.

State Attorney General Shapiro said that while the bishops of all six dioceses under investigation were invited to testify before the grand jury, only Erie’s Bishop Lawrence Persico chose to do so.

In April, Bishop Persico went ahead and authorized the “publication of 51 names of persons who were credibly accused of actions that, in the diocese’s judgment, disqualify each person from working with children, he promised that additional names would be added to the list as new information came to light,” according to a diocesan statement.

Since then, thirteen additional names have been added to the list.  The move to get out in front of the grand jury report is seen as an effort to rebuild trust between the diocese and the laity.