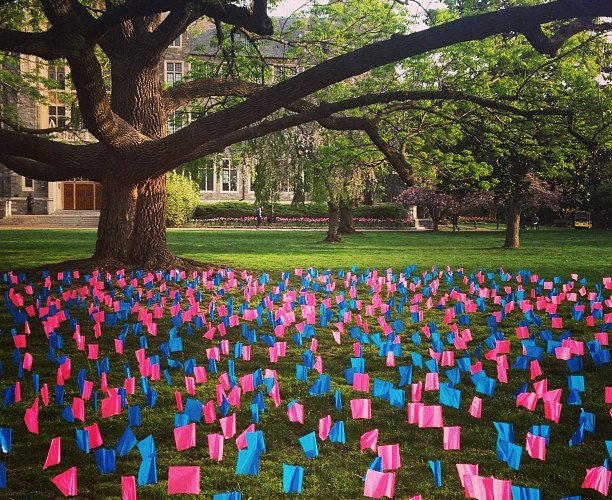 November 13, 2015 (CardinalNewmanSociety) — Bishop Kevin Rhoades of the diocese of Fort Wayne – South Bend in Indiana published a strong message this week criticizing the recent support for Planned Parenthood at Saint Mary’s College and the unsatisfactory response by the administration, insisting there’s no excuse for a positive portrayal of Planned Parenthood, “Just as we would be rightly scandalized to see a public display portraying a racist organization like the Ku Klux Klan in a positive light.”

“The actions taken by the students and faculty in support of Planned Parenthood illustrate that even at a Catholic college, there are those who cling to the conviction that Planned Parenthood is an organization dedicated to the well-being of women,” said Bishop Rhoades in his official statement on the diocesan website. “While I do not doubt the sincerity of those who hold this view, I do challenge them to seriously re-examine for what this organization stands in light of our common humanity and our Catholic faith.”

Bishop Rhoades confirmed to the Newman Society that he had spoken to Saint Mary’s president Carol Ann Mooney following the incident and assured the pro-life students at the College of his continued support for the pro-life message on campus and opposition to any positive portrayal of Planned Parenthood.

Since the initial reports, both President Mooney and Karen Johnson, vice president for student affairs, have released their own responses attempting to explain the situation.

Johnson sent an email to students stating that the Planned Parenthood display did not compromise the College’s Catholic identity, was educational and that the student group who organized the event followed the College’s guidelines, according to The Observer.

Johnson denied the Newman Society’s request to distinguish how an event being educational is different from support or advocacy, and how the event did not violate the college’s following guideline: “It is inappropriate for Saint Mary’s College student clubs and organizations to advocate for or support organizations, agencies or groups that act contrary to Church teachings or to sponsor events that advocate positions contrary to the teachings of the Catholic Church.”

President Mooney attempted to explain away the event as a prudent decision on the College’s part.

“The difference between what the student group wanted to do but was not permitted to do, and what the group of faculty did, may not be readily apparent; but there is a difference,” Mooney said in her official statement. “The student group wanted to stage an openly pro-Planned Parenthood event; they wanted to advocate for an organization that operates, in a number of ways, in contravention of Church teaching.”

After the event was reportedly toned down, faculty members decided to distribute fact sheets to students which included information regarding Planned Parenthood’s contraceptive services.

“The Academic administration told the faculty members that the fact sheet could be only that, a fact sheet, and not an advocacy piece,” Mooney stated. “The distribution of the information by the faculty members was, understandably and unfortunately, seen as being part of the students’ display and the whole was perceived as support for Planned Parenthood.”

“In conclusion, Saint Mary’s College remains faithful to our mission as a Catholic College,” said Mooney. “I am proud of the work we do here to educate women who leave us ready to make a difference in the world.”

Bishop Rhoades, however, disagreed with Mooney’s deduction that the Saint Mary’s remained faithful to its Catholic mission, stating:

Catholic identity is not only about what we stand for; it is also about what we will not stand for. Just as we would be rightly scandalized to see a public display portraying a racist organization like the Ku Klux Klan in a positive light, so too, we expect Catholic colleges to refuse to lend any kind of respectability to organizations like Planned Parenthood that play such a significant role in the culture of death.

“Authentic freedom, academic or otherwise, is always linked to the service of truth and love,” said Bishop Rhoades. “It is also ordered to the formation of the human person in truth and love, formation in which Catholic colleges and universities play a critical role.”

“I was very saddened to learn that this show of support for an organization that is the largest abortion provider in our country occurred at a Catholic college in our diocese,” he continued. “At the same time, I have been heartened by those students, faculty and alumnae of St. Mary’s College who are committed to the cause of life and the authentic good of women and have expressed their opposition to Planned Parenthood and any positive portrayal of this organization.”

“Catholic colleges and universities must not look the other way or remain silent in the face of attacks against the most vulnerable human beings among us, those as yet unborn,” Bishop Rhoades said.