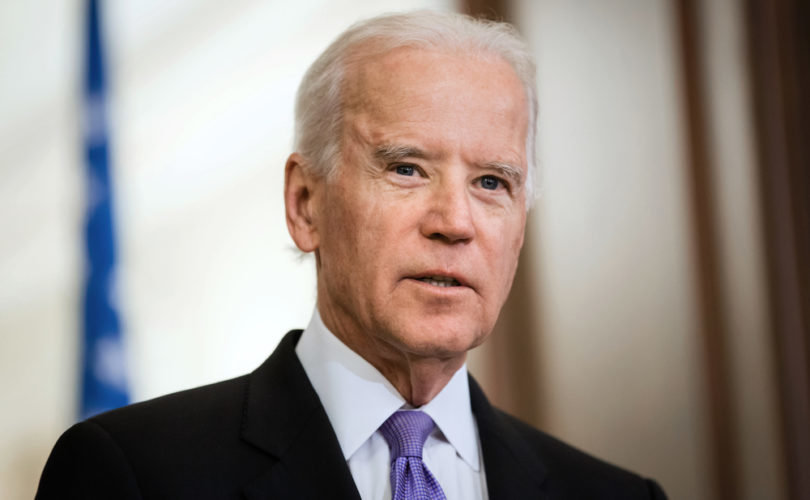 March 15, 2016 (CardinalNewmanSociety) – South Bend, Ind., Bishop Kevin Rhoades severely criticized the University of Notre Dame’s decision to award pro-abortion Vice President Joe Biden with the 2016 Laetare Medal, saying the controversial choice could “provoke scandal” by giving the impression “that one can be ‘a good Catholic’ while also supporting or advocating for positions that contradict our fundamental moral and social principles and teachings.”

“While I understand Notre Dame’s intentions in conferring the Laetare Medal upon Vice President Biden and Speaker Boehner, I disagree with the decision,” Bishops Rhoades said in his official statement released today to The Cardinal Newman Society. “I believe it is wrong for Notre Dame to honor any ‘pro-choice’ public official with the Laetare Medal, even if he has other positive accomplishments in public service, since direct abortion is gravely contrary to the natural law and violates a very fundamental principle of Catholic moral and social teaching: the inalienable right to life of every innocent human being from the moment of conception.”

“I also question the propriety of honoring a public official who was a major spokesman for the redefinition of marriage,” he added. “The Church has continually urged public officials, especially Catholics, of the grave and clear obligation to oppose any law that supports or facilitates abortion or that undermines the authentic meaning of marriage. I disagree with awarding someone for ‘outstanding service to the Church and society’ who has not been faithful to this obligation.”

Last week, Notre Dame announced that it would bestow its 2016 Laetare Medal, the “oldest and most prestigious honor accorded to American Catholics,” on Biden. According to the honor’s description, the pro-abortion Catholic politician is being honored as one “whose genius has ennobled the arts and sciences, illustrated the ideals of the Church and enriched the heritage of humanity.” Despite Bishop Rhoades’ personal warning several months ago not to award the medal to Biden, the University has proceeded with the planned honor.

The University also sought to justify its choice by pairing Biden’s award with former Republican Speaker of the House John Boehner, claiming to celebrate “respectful dialogue,” “compromise” and “working for the common good” in opposition to the “toxic political environment” of our time.

“In truth, the University’s praise and honor for Vice President Joe Biden creates a toxic religious environment on Notre Dame’s campus and in the broader public, betrays the University’s religious mission, and sends the clear message that a Catholic who unrepentantly and publicly opposes Catholic moral teaching deserves a Catholic university honor for being a model Catholic citizen,” the Newman Society said in a statement. “It’s not enough for Notre Dame — or any Catholic university — to simply issue a disclaimer and pretend there isn’t a scandal when honoring public figures who publicly oppose and violate Catholic moral teaching. The Cardinal Newman Society emphatically condemns the awarding of the Laetare Medal to Vice President Biden.”

“Father Jenkins made it clear to me that in recognizing Vice-President Biden and Speaker Boehner, Notre Dame would not be endorsing the policy positions of either, but rather, would be honoring them for their public service in politics,” he said, noting the conflict this presented.

“I realize that Notre Dame is trying to separate or distinguish the conferral of the Laetare Medal upon the recipients from their positions on public policies. I do not think this is realistically possible or intellectually coherent,” Bishop Rhoades stated. “To accomplish the goal of promoting cooperation, civility, and dialogue in American politics, I think it would have been better if Notre Dame had invited Vice-President Biden and Speaker Boehner to speak at Notre Dame on this topic rather than bestow an honor that can provoke scandal.”

“My principal concern about this whole matter is scandal,” he added.

While Notre Dame serves the Church and the diocese in many exemplary ways, it needs to reflect on the impact and scandal events like this can cause, Bishop Rhoades explained: “We need to reflect more deeply on the meaning and significance of the bestowal of honors in relation to the Catholic identity and mission of our institutions. I would encourage Notre Dame and other Catholic colleges and universities to ‘raise the bar’ in considering the granting of honors. I believe a higher standard is needed.”

“We should seek to honor those who act to protect human life and dignity from conception to natural death, who respect true marriage and the family, who promote peace, justice, religious freedom, solidarity, the integral development of the poor, the just treatment of immigrants, and care for creation,” said Bishop Rhoades. “We should not honor those who may be exemplary in one area but gravely irresponsible in another.”

The bishop said that in honoring Catholic politicians or public officials, “we should make sure there is a basic consistency between their political decisions and sound Catholic moral and social teaching.  We should not honor those who claim to personally accept Church teaching, but act contrary to that teaching in their political choices.”

Public honors should be reserved for those “whose lives and work are exemplary in witnessing to the Gospel,” and those “who dissent from the truths and values we profess and hold dear” should be disqualified from receiving honors from Catholic institutions.

“When we do so, when we ‘raise the bar,’ so to speak, we not only avoid scandal, but we also have an opportunity to recognize and thank authentic witnesses to the Catholic faith for their fidelity,” he continued. “We also lift them up in a way that may inspire others to imitate their example.”

It would do the University good to reflect on the words of Pope Francis, the bishop concluded. “Pope Francis is calling all of us to embrace the challenge of a missionary spirituality,” but in doing so he also warns against a “spiritual worldliness that consists in seeking not the Lord’s glory but human glory,” he said. “I think this counsel is also relevant in decisions about conferring honors.”