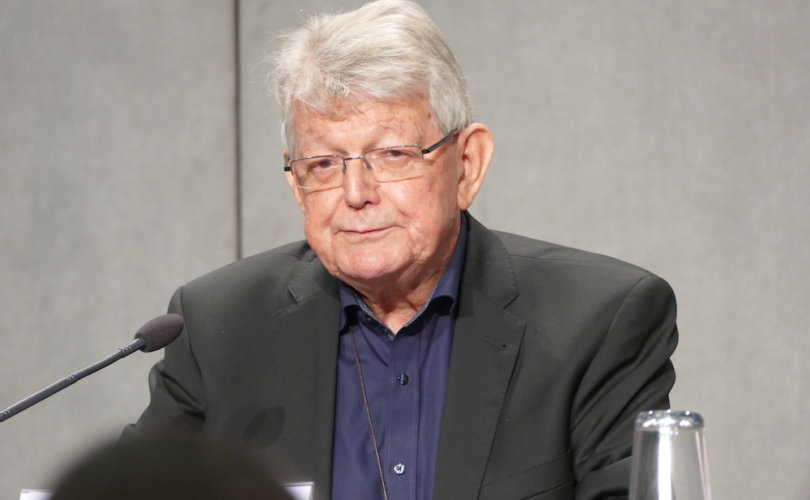 VATICAN CITY, October 9, 2019 (LifeSiteNews) ― An Austrian-Brazilian bishop stated today that there is no other option but to ordain married men in the Amazon because the indigenous people don’t understand celibacy.

Bishop Erwin Kräutler of the Missionaries of the Precious Blood is the Bishop Emeritus of Xingu in Brazil. A member of the Synod of Bishops for the Pan Amazonian region being held in Rome, he answered the question of an English journalist who asked why a married priesthood was so important for the Amazon.

“There is no other option because they don’t understand celibacy,” Kräutler said. The bishop has been asked by indigenous people where his wife is. Upon being told that he doesn’t have a wife, they responded, “Poor man.”

Kräutler indicated that indigenous men rely on wives to cook for them and care for them in other ways.

Responding to another question on the topic, Kräutler said that he had met with Pope Francis on April 4, 2014 to discuss a need to protect the Amazon region, indigenous people, and the Eucharist.

“Thousands of communities [in the Amazon region] have the Eucharist only two to three times a year,” the bishop said.

Kräutler stressed that there is “no Christ in the absence of the altar” and that “we want our brothers and sisters to have not just the Liturgy of the Word but the Eucharist.” The Eucharist can be celebrated only by priests, Kräutler noted, and suggested that Catholics who resist opening the priesthood to married men in the Amazon are placing the human law of celibacy over the obligation of enacting the Last Supper.

“Do this in memory of Me,” he reminded the assembled journalists.

The Austian-born bishop, now a naturalized Brazilian citizen, added that two-thirds of the Catholic communities in the Amazon region are “directed and coordinated by women.”

“We need concrete solutions,” he said. “I’m thinking of [a] women’s diaconate. Why not?”

Kräutler stopped short of suggesting that women themselves be permitted to celebrate the Eucharist.

Christopher Lamb, the Tablet journalist who asked the Bishop Emeritus of Xingu about the importance of a married priesthood, prefaced his question with an apology “to the indigenous and people of the Amazon for what we have seen in parts of the Catholic media, some of the demeaning, xenophobic, and at times racist remarks against them.”

Voices on Twitter, however, are contrasting Lamb’s “apology” for the alleged racism of others with Bishop Kräutler’s insistence that indigenous people cannot understand celibacy. Voluntary celibacy is not the human norm in any region of the world, and yet Catholic men from every nation have answered the call to the celibate priesthood in imitation of the celibacy of Jesus Christ.

Ricardo German, a Brazilian theology and philosophy student, told LifeSiteNews that the idea that the indigenous people of his country are incapable of understanding celibacy was “patronizing.”

“Anyone slightly to the right of Hillary Clinton would immediately be called a racist for saying something that patronizing,” he said.

“Clearly stating that an entire people is incapable of understanding something is to say that they are less than fully human,” he continued.

“If the indigenous people of South America are ‘incapable’ of understanding celibacy, then they are equally incapable of understanding any practice or teaching of the Catholic faith, which would make them less than human.”

Hichborn said that one beauty of the Catholic faith is that “it is for everyone to grasp, not just the educated.”

“The first Spiritual Work of Mercy is to ‘teach the ignorant,’ and if His Excellency isn’t willing to even try, then he is either spiritually lazy or he is a racist,” he continued.

“Either way, his comment must be retracted and he owes the people about whom it was stated an apology.”

A priest who spoke to LifeSiteNews on condition of anonymity says that the issue isn’t really married priests, but married priests becoming sexually continent upon their ordination. This continence was the rule among married priests of the early centuries of the Church.

This priest sees a sexually active clergy as the beginning of a process to eliminate clergy.

“First you allow sexually acting married priests, and then you degrade priesthood to a ministerial function that people do part time like a volunteer activity. Then you eliminate the clerical state,” he said.

Meanwhile, clerical ordination, including ordination to the diaconate – the first rung of priesthood – has never been conferred upon women. According to St. John Paul II, writing in Ordinatio Sacerdotalis, it never can be.

Although the teaching that priestly ordination is to be reserved to men alone has been preserved by the constant and universal Tradition of the Church and firmly taught by the Magisterium in its more recent documents, at the present time in some places it is nonetheless considered still open to debate, or the Church's judgment that women are not to be admitted to ordination is considered to have a merely disciplinary force,

Wherefore, in order that all doubt may be removed regarding a matter of great importance, a matter which pertains to the Church's divine constitution itself, in virtue of my ministry of confirming the brethren (cf. Lk 22:32) I declare that the Church has no authority whatsoever to confer priestly ordination on women and that this judgment is to be definitively held by all the Church's faithful.

The Instrumentum Laboris, or working document, for the synod asked that “older people” be permitted to receive priestly ordination in the Amazon region.

“Affirming that celibacy is a gift for the Church, it is requested that, for the most remote areas of the region, the possibility of priestly ordination be studied for older people, preferably indigenous, respected and accepted by their community, even if they have an existing and stable family, in order to ensure availability of the Sacraments that accompany and sustain the Christian life,” it reads.