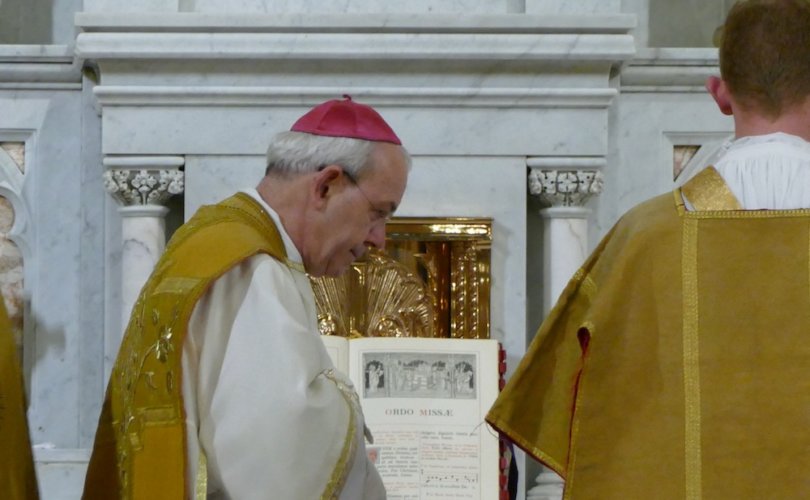 During an extensive Q&A session after a talk in Washington, DC, earlier this month, Schneider also said the current state of American politics reminds him of “the Soviet time where I lived,” expressed hope that the Society of St. Pius X will be canonically regularized within the Catholic Church, and discussed the Vatican crackdown on the Franciscan Friars of the Immaculate.

Schneider said this in response to a question about comments Pope Francis has made in support of Martin Luther’s theology and the pontiff’s celebration of the Reformation.

“I am not living in this country” so “maybe I cannot give you a good counsel,” he told a young man about the U.S. presidential election. “But,” he said, “to the extent as I could observe this issue of the elections from the distance, I think … sometimes, one has to have distance to observe. You are now in the midst of the struggle. … To my maybe limited opinion, I think that this is a demonstration that this is a situation similar to a dictatorship of one group who will rule and who will impose [on you] candidates, both impossible, in some way. This is my opinion, I don’t know if I am [correct].”

“You are free to think another way,” he told the Americans gathered. “This is my humble opinion.” Schneider said the state of the U.S. election reminds him of “the Soviet time where I lived” when “we had always the same candidates to choose — but different names.”

Practice of ‘dialogue’ must be ‘corrected’

Much of the interfaith “dialogue” during the past 50 years has bore confusion rather than fruit, Schneider said. This confusion has lead to the “weakening of our commitment to preach the Gospel.”

“We have to correct this,” he said. “We cannot continue in such an ambiguous manner under the covering of dialogue.”

True dialogue leads people to the truth, he said.

‘My reward is the good conscience of faith, the fidelity to Jesus, and the reward I hope to receive in heaven’

The promotion of prelates who promote positions contrary to the Catholic faith is a temporal reward, Schneider said, which is “nothing in comparison to … eternity.”

“My reward is the good conscience of faith, the fidelity to Jesus, and the reward I hope to receive in heaven,” he said. “And these temporal rewards, I think they have not so much meaning. And so the better reward is to be faithful to faith, the faith. And God will do His work so be faithful and believe and help even those who are losing the faith.”

“I hope that now Pope Francis is generous” to the Society of St. Pius X, Schneider said, speaking of a traditional Catholic group that lacks regular canonical status in the Church but is not excommunicated or considered in schism. Pope Francis granted priests of the Society the faculties to hear Confessions during the Year of Mercy, and Rome has apparently offered the Society a personal prelature within the Church.

Schneider said he hopes a “practical,” “canonical” solution can be reached. Full communion with Rome would mean a “good presence of many priests” and individuals who are “substantially Catholic and will give a new contribution to strengthen” the Church, he said.

Schneider also weighed in on the extremely harsh treatment a religious order called the Franciscan Friars of the Immaculate has received from prelates who seem to oppose its mission, which emphasizes Catholic patrimony and worship.

“The development of the Franciscans of the Immaculate as a real traditional order in the Church which is not depending on Ecclesia Dei” led progressives to feel threatened, Schneider said. Many religious communities devoted to the traditional Latin Mass fall under the auspices of Ecclesia Dei.

“Some liberal members of the hierarchy consider the different communities of Ecclesia Dei some kind of museum pieces,” Schneider explained, and don’t want their traditional approaches to gain too much momentum.

But ultimately, he said, this is only a “temporary” setback. “When this is a work of God, no one can stop this. … This suffering of them will bear fruits. We have to see longer.”