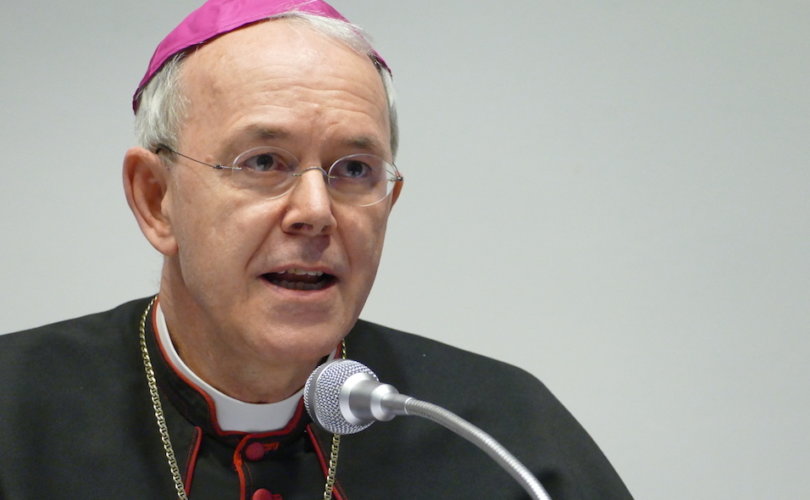 News of the forthcoming volume, titled “From the Depths of Our Hearts: Priesthood, Celibacy, and the Crisis of the Catholic Church,” was announced on Sunday, receiving a wave of praise but also considerable backlash.

In a statement issued on Tuesday, January 14 (see full text below), the auxiliary bishop of Astana, Kazakhstan argues that the “slander and lies” directed against the Guinean cardinal only prove that the new volume on priestly celibacy is both “timely” and “necessary.”

Bishop Schneider writes: “One might say that the intervention of Cardinal Sarah has provoked, so to speak, the anger of hell.”

Cardinal Sarah, he says, has “given voice” to numerous bishops, priests and laity, who have been “stifled” by “influential groups” that are lauded by the world but may rightly be numbered among the “enemies of the Catholic Faith.”

In his statement, Bishop Schneider also notes, with regret, the “abandonment” Cardinal Sarah has suffered in recent days, “even by those persons who unambiguously and without human respect should have supported him and his intervention.”

The bishop also maintains that Cardinal Sarah has “proven” by the new book that he is a “true help” to Pope Francis and the Church, and he expresses his hope that the Pope may “effectively and fruitfully” consider the cardinal’s contribution.

He concludes his statement of support, assuring Cardinal Sarah that the “little ones” are grateful to him and close to him in prayer.

In recent months, Bishop Schneider has offered his own forceful defense of priestly celibacy in the Latin Church. In his own new book, “Christus Vincit: Christ’s Triumph Over the Darkness of the Age,” His Excellency addresses those who advocate ordaining viri probati (i.e. sexually active married men), saying: “If you knew what the Catholic priesthood really is, you would never for any reason whatsoever advocate weakening or abolishing the apostolic tradition of priestly celibacy.”

Here below is the full statement of Bishop Athanasius Schneider, in support of Cardinal Sarah and his new book “From the Depths of Our Hearts.”

The book is now available for pre-order from Ignatius Press.

From the depths of the heart, one must thank His Eminence Cardinal Robert Sarah for his heroic gesture in having written the book “From the Depths of Our Hearts” (original in French: “Des profondeurs de nos coeurs”), and above all for its theologically and pastorally extremely clear and apt content.

With his intervention, Cardinal Robert Sarah has given voice to many bishops, priests and simple faithful throughout the world, whose voice had been stifled by those administrative structures and influential groups within the life of the Church, which are applauded by the powerful worldwide network of the enemies of the Catholic Faith — the Faith of all times.

Some of the enemies of the true, Catholic and Apostolic Faith launched a lightning-fast attack against Cardinal Sarah by means of slanders and lies. This proves that Cardinal Sarah’s intervention was both highly necessary and very timely. One might say that the intervention of Cardinal Sarah has provoked, so to speak, the anger of hell. One might also compare the announcement of Cardinal Sarah’s new volume (and its specific content) with the shock-reaction that Herodes, the High priests, the Scribes and the whole of Jerusalem exhibited at the announcement by the Magi of the birth of the New King of Israel.

The Lord also asks from His Eminence Cardinal Robert Sarah the sacrifice of having unfortunately and enigmatically been abandoned even by those persons who unambiguously and without human respect should have supported him and his intervention.

One can say with deep conviction that Our Lord, the Church of all times, the Popes of all times, and all the true Catholics of our time, especially the “little ones” in the Church, are grateful to His Eminence and are close to him!

By his intervention, Cardinal Robert Sarah has only fulfilled his grave duty and proven to have been a true help to the Pope and, in this manner, to the entire Church. One can believe that in doing so, he was moved neither by praise nor by threats (nec laudibus, nec timore), thus bearing witness to the symbolism of the red color of the cardinals’ vestments and of their title “Eminence.”

The “little ones” in the Church are surely grateful and pray for His Eminence Cardinal Robert Sarah.