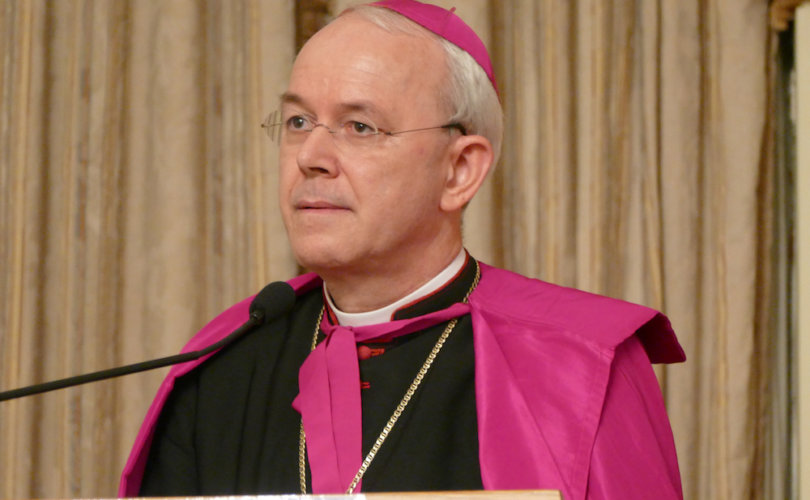 Cardinal Joseph Zen, the Bishop Emeritus of Hong Kong, was arrested by Hong Kong police on May 11, before being released on bail some hours later. He was accused of “allegedly colluding with foreign forces” due to his role as a trustee of the 612 Humanitarian Relief Fund.

The arrest of 90 years old Cardinal Joseph Zen it is absolutely shameful and a challenge to the Church of God. I hope that the Holy Father will make his voice strongly heard against this unbelievable act. pic.twitter.com/TAQpE81oNd

This morning, Bishop Schneider tweeted, “the arrest of 90 years old Cardinal Joseph Zen … is absolutely shameful and a challenge to the Church of God.”

“I hope that the Holy Father will make his voice strongly heard against this unbelievable act,” he continued.

Following Cardinal Zen’s arrest, politicians and Catholic leaders alike have condemned the act and called on the Vatican to reject its secretive deal with China.

The Catholic Church has diplomatic contracts with most countries across the world. These outline the relationship between the Catholic Church and secular governments. However, the Church’s arrangement with China is secret, while agreements with other countries are public.

The deal was first signed in 2018 and later renewed in 2020, but the specific details remain undisclosed, though it allegedly recognizes the state-approved church and allows the Chinese Communist government to appoint bishops.

China expert Stephen Mosher described the secret agreement as “perhaps the most controversial of a papacy dogged by controversy.”

It’s a “betrayal of the real Church,” lamented Cardinal Joseph Zen in 2020 before revealing a startling detail: “It’s not an isolated episode. It’s already a long-standing policy of the Vatican not to offend the Chinese government.”

The cardinal’s arrest places increased scrutiny on the Vatican and Pope Francis, as the secretive deal he made with Beijing is up for its second renewal in the fall. Zen has been a vocal critic of the deal, accusing Francis of “encouraging a schism” and “selling out the Catholic Church in China.”

Earlier this year, the Vatican’s top ranking officials in both Taiwan and Hong Kong were removed within weeks of each other and have yet to be replaced, prompting Hong Kong Watch’s Benedict Rogers to speculate that the Vatican could be looking to strengthen ties with China.

Bishop Schneider’s appeal to Francis echoes that of Rogers, who joins many other Catholics in calling for Francis to end the deal with China.

“The time has come for Catholics everywhere to make this point to the Vatican,” Rogers said. “Write to the Secretariat of State and make your views on Rome’s dodgy deal with the Chinese Communist Party known. Call on the Holy Father to speak out.”

“Demand an end to the policy of appeasement which Rome has adopted towards one of the world’s most repressive, brutal, genocidal regimes,” he continued. “And pray for the Church in China and Hong Kong.”