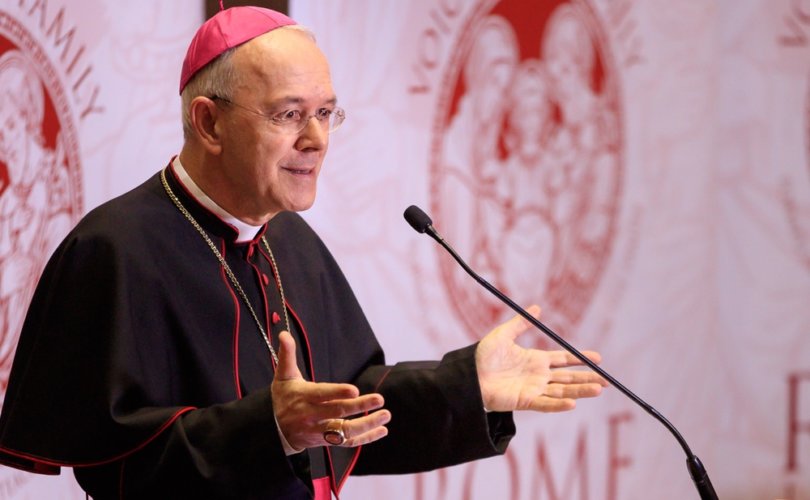 May 10, 2021 (LifeSiteNews) – Kazakhstan Bishop Athanasius Schneider is urging faithful Catholics in Germany, who are witnessing schism unfolding right before their eyes as increasing numbers of clergy publicly defy Catholic moral teaching, to pray and to continue to remain faithful.

“Firstly, they should self-assuredly and joyfully confess the fullness of the Catholic faith, which they know from the Catechism and from the ever-valid documents of the Magisterium of the Church,” Bishop Schneider told LifeSiteNews.

Schneider’s comments came as hundreds of German clergy, with support from various local bishops, offered blessings to homosexual couples today in outright defiance of the Church’s ban on such blessings that was reiterated in March by the Congregation for the Doctrine of the Faith. His comments also came after having signed last week an appeal to Pope Francis, along with Hong Kong Cardinal Joseph Zen, Switzerland Bishop Marian Eleganti, and a dozen priests, asking the Pope to intervene to stop the Catholic Church in Germany from going into “schism” by continuing on its heretical Synodal Path and thereby separating itself from the one, holy, catholic, and apostolic Church founded by Christ.

Bishop Schneider said that faithful Catholics in Germany must not retreat during these times but go on the offensive.

Faithful Catholics must support “in many ways” bishops and priests in Germany who choose to remain true to all the teachings of the Catholic faith, he said.

“All those who still want to live the fullness of the Catholic faith should unite together, pushing away some existing differences between them, which are substantially of a secondary character, in view of the ongoing massive apostasy from the Catholic faith in Germany,” the bishop said.

Schneider said that Catholics in Germany should implore bishops known to be faithful to imitate the example of Blessed Cardinal von Galen, Bishop of Münster, Germany, who in the 1930s vigorously condemned from his Cathedral’s pulpit the Nazi’s program to systematically euthanize the sick, elderly, and mentally disabled Germans. He also noted that bishops also have for an example to imitate their predecessors who, during the Kulturkampf struggle that began in the early 1870s, strongly resisted German chancellor Otto von Bismarck’s war on Catholicism in his attempt to subject the Catholic Church to state control.

Finally, Bishop Schneider said that Catholics in Germany who seek to be faithful during the troubling times should “implore God for new apostles and ask St. Boniface and St. Peter Canisius to intercede and also St. Michael, St. Joseph, and, in first place the Immaculate Heart of Mary, to whom Germany was consecrated.”

Asked if there is anything that can be done practically to save the Catholic Church in Germany or is it already too late, Bishop Schneider told LifeSiteNews that “from the human point of view there is little hope.”

“To save the Catholic Church in Germany, there is first the need of prayer and reparation for the sins against the Catholic faith and the sanctity of the sacraments, committed in the past decades in first place by many representatives of the hierarchy, cardinals, bishops and priests. There is a need of a Divine intervention that will raise some new apostles of the Catholic faith in Germany,” he said.

The bishop briefly sketched key points that he sees as leading to the current situation where clergy are defying Rome in blessing homosexual couples while the country’s bishops walk down a Synodal Path that appears to be leading to a departure from the Church’s teaching on the priesthood, marriage, and sexual morality.

Schneider criticized the church in Germany for allowing itself to become entangled with sources of potential compromise, including its overemphasis on “bureaucracy” along with its attachment to the church tax.

“Like no other particular church in the world, the Catholic Church in Germany possesses a bureaucracy to the limit of the reasonable,” he said. “In addition to that, the majority of the office holders of the administrative apparatus of the Church in Germany are well paid on the base of the so-called ‘Kirchensteuer,’ a church tax, collected by the government.”

The bishop said that one way the Holy See could begin strengthening the Catholic faith in Germany would be by “uncompromising appointments of clearly Catholic-minded bishops with a true apostolic spirit.”

“It will be better to leave some dioceses even for many years without a bishop rather than to appoint a candidate who is weak in faith and politically correct. For those dioceses where there cannot be found yet a suitable truly Catholic candidate for the office of a diocesan bishop, the Holy See could appoint Apostolic Administrators, who could be priests or bishops, however with an unambiguous Catholic spirit,” he said.

If clergy in Germany decide to formally separate themselves from the Catholic Church, they should make that clear by calling themselves something other than Roman Catholics.

“It is not the number and the administrative and financial power which will represent the true Catholic German Church. I think the true and authentic German Catholics will constitute a minority. I believe that with a faithful minority God will renew the Catholic Church in Germany, since the majority of those who are still nominally and on the paper Catholics and even a considerable part of the clergy, has long ago lost the true Catholic faith,” he said.

“God will renew His Catholic Church in Germany with the faithful minority and that minority should not have any inferiority complexes, but be confident and joyful in midst of the persecution,” he added.