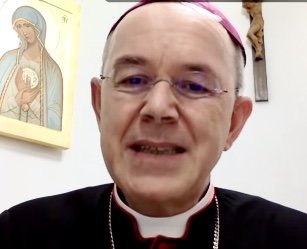 ASTANA, Kazakhstan, July 28, 2020 (LifeSiteNews) ― The auxiliary bishop of Astana has called for the correction of texts promulgated by the Second Vatican Council that have led to “relativism.”

“I think that one day the Church should formally correct (expressions in) Lumen Gentium 16, in Nostra Aetate and also (one) in the Ecumenical Decree on Non-Christians that (says)  the Holy Ghost is using them as instruments,” Bishop Athanasius Schneider told Dr. Taylor Marshall in an online interview posted Sunday.

Schneider, 59, also discussed problematic phrases in Dignitatus Humanae and in Sacrosanctum Concilium, the Second Vatican Council’s document on the liturgy.

Marshall introduced the theme of the Second Vatican Council by saying both priests and laity are becoming aware that the current crisis in the Church relates to “problem passages” in the Council’s documents. Marshall listed such issues as syncretism, false ecumenism, and adulatory descriptions of Islam, Buddhism, and Hinduism.

Schneider said the majority of the texts of the Second Vatican Council are good, and those that are ambiguous can be interpreted within the tradition of the Church “in a benevolent way.” However, the bishop also pinpointed a few expressions in the documents that have had “very bad consequences.”

“The greatest problem with these (problematic) texts can be reduced to one topic: relativism,” Schneider said.

The bishop said that these few “expressions” relativize the Lord Jesus Christ, the Gospel, the incarnation, the work of redemption, and the Catholic Church.

“All these expressions that you mentioned ultimately have their roots in relativism,” he told Marshall.

The Problem in Lumen Gentium 16

Schneider pointed first to a phrase in Lumen Gentium that incorrectly erases an important distinction between Christian and Muslim worship of God. In the sentence, “In the first place amongst these there are the Muslims, who, professing to hold the faith of Abraham, along with us adore the one and merciful God, who on the last day will judge mankind”, the bishop took strong issue with the phrase “with us,” “nobiscum” in Latin.

“This is wrong,” Schneider said firmly.

He explained that Lumen Gentium 16 errs in suggesting that Christians and Muslims participate together in the same act of adoration. It errs because Muslims worship on a natural level, at the same level of anyone who adores God with the “natural light of reason,” whereas Christians adore God on a supernatural level as His adopted children “in the truth of Christ and in the Holy Spirit.”

“This is a substantial difference,” Schneider observed. He explained that the use of the phrase “with us” represents a relativization of the act of adoration of God and also of Christians’ “sonship.”

The Problem in Dignitatis Humanae

The bishop then cited a problem in a statement about religious freedom in Vatican II’s Dignitatis Humanae. Schneider praised the document for observing that nobody can be forced to believe, but then he critiqued its statement that human beings should not be constrained from worshipping according to their conscience.

Schneider said that this was equating the right to worship idols to a right stemming from human nature, i.e. believing or not believing.

“When something is a right of human nature, it is positively willed by God,” he explained.

“If you say it is a right of your nature, you are saying that it is positively willed by God that no one should be hindered to practice and to spread, let us say, idolatry.”

Schneider observed that many people are “convinced in their conscience” that they must practise idolatry and that this is opposed to divine revelation. He noted also that the problematic phrase is “substantially the same as the phrase of the Abu Dhabi document which says that the plurality or diversity of religions (…) is the wise will of God.”

“We have to be sincere and intellectually honest: this is not acceptable” the bishop said.

“And these two phrases, in Lumen Gentium and in Dignitatis Humanae, too, are the root from which stemmed and developed all the relativism which we experienced in the last five decades in the life of the Church.”

Schneider recalled the controversial World Day of Prayer convoked by St. John Paul II in Assisi in 1986 and the veneration of the “Pachamama idol” in St. Peter’s Basilica during last October’s Synod on the Amazon. He pointed out that the logic of not hindering the conscientious worship of idols applies to the worship of Pachamama ― even within Vatican City itself.

Schneider criticized texts suggesting that Buddhists and Hindus can attain illumination on their own, without “the grace of Christ,” as a heresy.

“It’s Pelagianism and relativism (saying) that Christ is not the only source,” he said.

“So you see these texts cannot be accepted as they are.”

Regarding Sacrosanctum Concilium, Schneider praised it for its defense of traditional liturgy, to which the Novus Ordo and the “ad populum” celebration of Mass are a “plain contraction,” he said. He believes that it, too, has problematic sections, saying it weakened the theology of specific sacraments by asking that their rites be reviewed. However, the bishop also believes that the current “Ordinary Form” of the Mass should be reformed according to the principles laid out by Sacrosanctum Concilium.