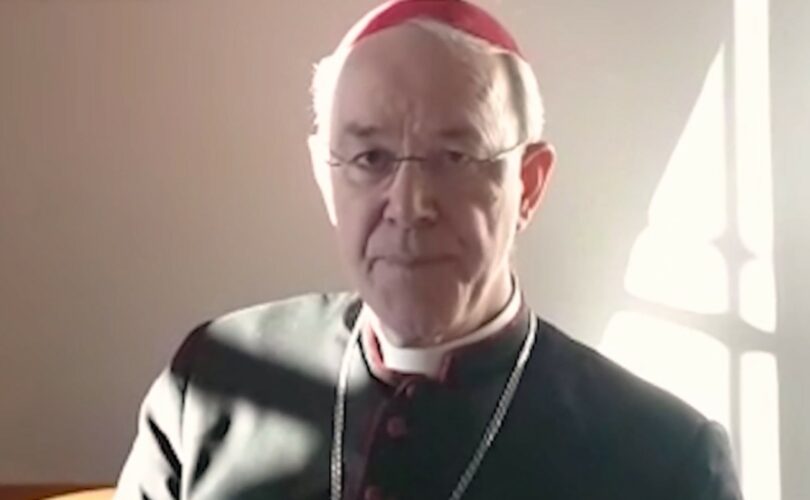 VATICAN CITY (LifeSiteNews) — LifeSiteNews editor-in-chief John-Henry Westen traveled to Rome to say his farewell to the late pontiff and give a special report from the Vatican.

READ: Pope Benedict XVI dies at the age of 95

Haynes said that what stuck out to him about Benedict’s life was his “early desire to become a priest,” even from his childhood days.

Westen and Haynes also talked about Pope Benedict’s pro-life work, especially his 2004 letter about the reception of Holy Communion for pro-abortion politicians to the American bishops. In this letter, Benedict, who was still Cardinal Joseph Ratzinger at the time, stressed that priests must deny communion to pro-abortion politicians if they persist in their support for abortion after being corrected.

In the special report, Bishop Athanasius Schneider gave his perspective on Pope Benedict’s greatest achievement in a video message.

Schneider said that Benedict put “at the center of his personal life and of the life of the Church the supernatural view of the faith and of the perennial validity of the Tradition of the Church.”

“The greatest and most beneficial act of his pontificate was the motu proprio Summorum Pontificum, with the full restoration of the Traditional Latin Liturgy in all its expressions: Holy Mass, Sacraments, and all the other Sacred Rites,” Schneider stated. “This pontifical act will go down in history as ‘epoch-making.’”

Continuing, Schneider noted that Pope Benedict XVI stated that “the Traditional Roman Rite was never abrogated and should remain always in the Church because what was holy for our forefathers and the saints must be holy for us and for the future generations as well.”

Schneider said that with Summorum Pontificum “began the healing of the wound in the body of the Church, which was caused by the attitude of rejection and even hatred of the venerable and millennium-old rule of the prayer of the Church.”

The auxiliary Bishop of St. Mary’s, Astana, said that Pope Benedict’s legacy is expressed in his words “stand firm in the faith, do not be confused.”

Schneider furthermore stressed that “the intervention of divine providence” will “overcome the current enormous doctrinal confusion.”

According to Schneider, this confusion is caused by a “creeping apostasy, especially among a worldly and unbelieving caste of theologians, who are the new scribes,” and by some of the “high-ranking clergy, who are the new Sadducees.”

Moreover, Westen pointed out in the report that there is now a “strange situation” because there was a restoration of the Traditional Latin Mass (TLM) and the traditional sacraments under Benedict’s reign, but Francis’ motu proprio Traditionis Custodes (TC) again put restrictions on the TLM.

“It’s a hammer blow,” Haynes said about TC, adding that it “severely restricts the availability of the Latin Mass around the world.”

At the same time, Haynes pointed out that Latin Mass parishes are often the ones that are thriving and are “the youngest, more full of families, more free with their donations because they realize the need to support the Church. They are the lifeblood.”

LifeSite’s editor-in-chief pointed out that it is sad to see that Benedict’s legacy is being “stomped on” with the restriction of the TLM.

Haynes said that the allowance and promotion of the Latin Mass will be Benedict’s “main legacy,” which makes the pain of TC “even more bitter.”

“The Church will always have this treasure of the Latin Mass and it will continue to grow,” Haynes stated.