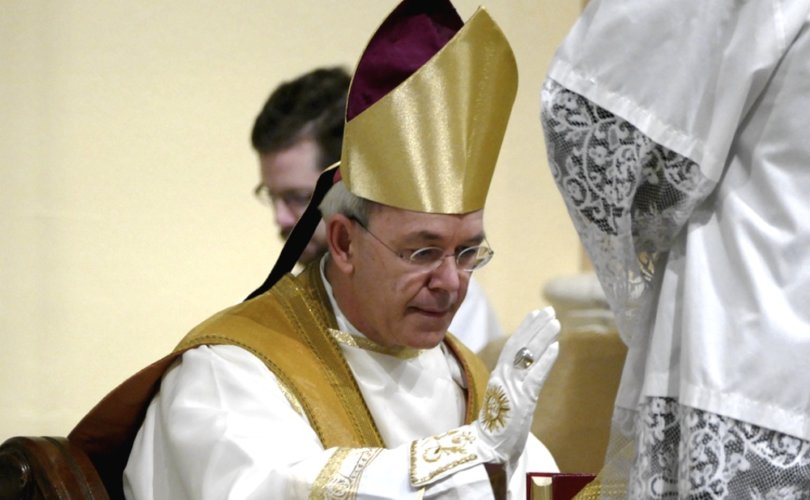 May 21, 2018 (LifeSiteNews) – Clerics who “bless” homosexual unions are “reintroducing a kind of pagan temple prostitution,” which is “akin to apostasy,” Bishop Athanasius Schneider said in a newly-published interview addressing ongoing controversies and crises in the Catholic Church.

Bishop Schneider, Auxiliary Bishop of the Archdiocese of Saint Mary in Astana, Kazakhstan, spoke with Dr. Maike Hickson at OnePeterFive about whether female ordination is possible, Holy Communion for Protestants, priestly celibacy, the Alfie Evans case, and more. Bishop Schneider is well-known around the world for his steadfast defense of life, the family, and Catholic orthodoxy.

Bishop Schneider commented on the German bishops’ proposal to give Holy Communion to Protestants in some cases and the Vatican’s loaning of sacred vestments to an exhibit that featured “clerical” attire for women. Hickson’s interview with Schneider, however, was conducted before the German bishops met with Pope Francis to discuss giving Holy Communion to non-Catholics and before the shocking 2018 met gala.

Nevertheless, Bishop Schneider’s comments on those two topics remain relevant, as do his other remarks on ongoing situations in the Church.

The case of Alfie Evans, the little toddler ordered dead by UK courts instead of his parents being allowed to take him to another hospital, is “the tip of the iceberg,” Bishop Schneider said.

“The iceberg is the modern anti-culture of killing unborn children, a practice started as a legal action for the first time in human history by the Communist and Marxist dictatorship of Lenin in 1920,” he told Hickson. “Since the sixties of the last century, the legal killing of unborn children was spread gradually like an orchestrated action in almost all Western countries. The worldwide ideology of killing unborn babies is essentially an ideology of contempt of humanity under the cynical mask of the alleged rights of the woman or of the nebulous ‘reproductive health.’”

The fight to remove Alfie’s life support showed the “only logical consequence of abortion, combined now with the euthanasia ideology,” he said.

“The Alfie case demonstrated truly, who is who in the issue of the uncompromising defense of the inviolability of human life,” commented Bishop Schneider. (The UK bishops, particularly the Archbishop of Liverpool and Cardinal Vincent Nichols, issued a number of statements siding with the hospital that wanted Alfie dead rather than his parents.)

The case caused “the defenders of life” at “all corners of the earth” to unite “into a common battle line,” he said. “It was a small, but noble, spiritual army unit against the powerful conspiracy of an agreed agenda of politics, of the judiciary and – to our great astonishment – also of medicine.”

Although it seems like those defending life lost this battle, the bishop said, the pro-death “Goliath” was the side that lost.

“In the case of Alfie the parties of politics, judiciary, and medicine involved lost the moral credibility of impartiality, transparency, and of the sense of justice,” continued Bishop Schneider. “The winner was nevertheless the little army of Alfie. For in the eyes of God and even in the eyes of History, those who defend the most weak and vulnerable human beings, who are in the first place the unborn and ill-born children, will always be the winners. Political, juridical and medical conspiracy against human life will one day surely collapse, because it is inhuman.”

“To the Alfie case and to the little life-army around him, one can apply these words of the Holy Scripture: ‘Those who sow in tears shall reap with shouts of joy!’ (Ps 126:5),” he concluded.

Commenting on a German-led effort for Catholic priests to “bless” same-sex relationships, Bishop Schneider said that priests who do that are committing an even greater sin than the sodomy they are endorsing.

Bishop Schneider used an analogy about seat belts – which can work only with two complimentary parts – to note that homosexual acts go against natural law. These acts also cause “spiritual death and oftentimes physical death because of the extremely high risk” of sexually transmitted diseases, he said.

“The clerics who are blessing homosexual practices are reintroducing a kind of pagan temple prostitution,” he said. “Such clerical behavior is akin to apostasy and to them are fully applicable these words of the Holy Scripture: ‘Certain people have infiltrated among you, who were long ago marked down for condemnation on this account; without any reverence they pervert the grace of our God to lewdness and deny all religion, rejecting our only Master and Lord, Jesus Christ’ (Jude 4).”

Female ‘ordination’ and intercommunion with Protestants?

Two heterodox proposals that are gaining steam in the Church under many Pope Francis allies are the normalization of married priests and the “ordination” of women. Hickson asked Schneider about female “ordination” in light of a priest’s comments saying he could picture a female pope. This priest wrote a book that Pope Francis recently praised.

“The Church would be destroyed in one of its essential realities” if a female “sacramental” ordination ever took place, said Bishop Schneider. “Yet this can never happen, because the Church is indestructible and Christ is the true Head of His Church, who will not permit that the gates of hell will prevail against her in this concrete aspect.”

He cited the Council of Trent, the magisterium of Pope St. John Paul II, and canon to explain why female “ordination” is not only an ontological impossibility but also gravely sinful.

It would be an “all too human” reaction to the shortage of priests in some parts of the world to think that normalizing married priests is the solution, Bishop Schneider said. He also noted the Church’s long-held rule that once a married man is ordained, he may no longer have sexual relations with his wife. He recommended Lo que Dios ha unido (“What God has joined”) by Hugo Wast, which the bishop said “convincingly and brilliantly” demonstrates “the incompatibility between the Catholic priesthood and a sexually active conjugal life.”

Non-Catholics receiving Holy Communion “constitutes, ultimately, a lie,” Bishop Schneider said. This is because reception of Holy Communion is contingent on believing everything the Catholic Church teaches.

The full interview can be accessed here.