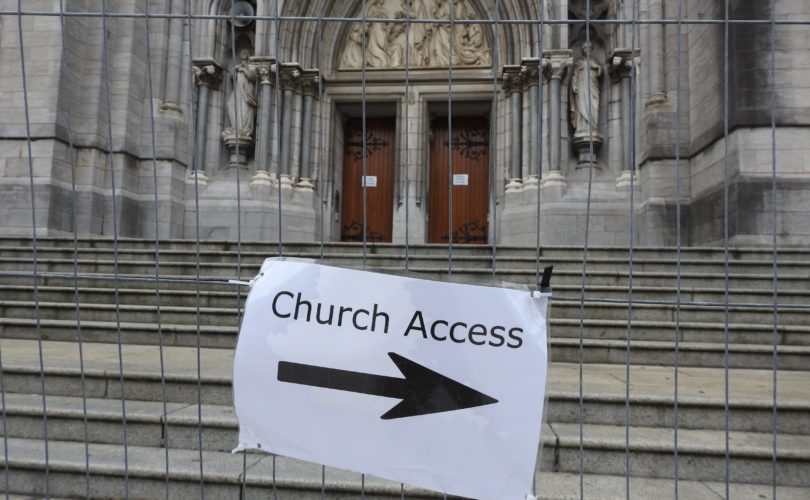 April 26, 2021 (LifeSiteNews) – In a show of support and encouragement to Catholics in Ireland still banned from attending Mass and sacramental Confession, Bishop Athanasius Schneider sent a rallying call to the faithful to pick up their rosaries and pray for the return of their God-given liberties.

The “Rosary Rally,” a campaign for Catholics to pray the rosary “every Sunday until Mass returns,” is being held outside parish churches on Sundays across the Republic of Ireland. The rally has been organized by the Catholic laity of Ireland in response to the government’s continued persecution of religious observance in the country, including the closure of churches to public worship and banning Confession to a priest, even while outdoors.

An amendment to Ireland’s Health Act, passed into law in October 2020, rendered gatherings for “religious or other reasons” illegal, threatening priests with hefty €2,500 fines (around $3,000 USD) and up to six months in prison for attempting to offer public Mass.

Adding insult to injury, new legislation now forbids meeting a priest for Confession, even if outdoors in the fresh air. Meeting a priest for a casual chat outdoors is allowed, however. Infractions against this new law are punishable by up to six months in jail or a fine of €127 (about $152 USD).

While meeting a priest in the setting of the confessional is now illegal, rules for meeting in public for other reasons were relaxed Monday. Groups of up to 15 people are now allowed to convene for sports training and “cultural non-contact outdoor activities” such as dancing, according to a report by the Independent.ie.

“Outdoor dance for groups of up to 15 will be permitted and the same for all non-contact outdoor activities will be allowed,” Culture Minister Catherine Martin confirmed in a speech to the Oireachtas Arts Committee on April 20.

In light of the direct attack by the Irish government on religious freedom, Bishop Schneider of Astana, Kazakhstan, called the laws against Catholic worship a “draconic and systematic suppression of the Holy Mass.” Schneider noted that such a unique imposition on worship makes evident that coronavirus laws are about more than “mere health safety.”

Catholic Arena reported that numerous groups of the faithful gathered on Sunday outside their locked churches to pray for the end to restrictions on participation in the sacraments. People can be seen peacefully praying the rosary together while physically distanced, in line with COVID-related laws.

Catholics gathered today outside their closed churches all across Ireland to pray the Rosary.

The Irish media are not covering these rallies, please share so that the world can see what is happening here. pic.twitter.com/wahrNPYsaH

Schneider sent his “blessing” and “encouragement to all who participate in the Rosary campaign for a return to the Mass,” noting the “heroic example of the loyalty to the Catholic Mass” passed on by faithful Irishmen during the penal times.

“The example of love, reverence and devotion of Catholics towards Holy Mass during persecution times is a powerful lesson which may shake up our souls and kindles them with a new fire of Eucharistic love and reverence,” he encouraged.

“One of the most moving and glorious historical examples is Ireland’s loyalty to the Mass in the time of persecution and the so-called ‘Hidden Saints of the Mass,’” Schneider shared, quoting from Father Augustine, O.M.Cap.’s Ireland’s Loyalty to the Mass.

Continuing, Schneider related an excerpt from Fr. Augustine’s book in which the scene of a Hill Mass is described, where large numbers of peasants could be seen kneeling in the mud outside a dilapidated building, itself packed with worshippers, as a clandestine Mass was being celebrated inside.

“It was not, therefore, anything merely human,” Schneider said, quoting Augustine, “but something really divine that caught their eyes and gripped their souls. It was the Real Presence of Christ in the Eucharistic Sacrifice that drew the Irish people, and caused them to pour out all the wealth of their hearts in the miserable hovels which He deigned to visit even for a fleeting hour or less.”

LifeSiteNews reached out to Catholic Arena, which criticized the Irish government for its specific attack on religious worship and the absurdity of having some dioceses in the Republic of Ireland with public Masses permitted in places, due to political overlap with the U.K.

“Irish people have faced the longest lockdown on religious worship in the past year of any country in the world,” a spokesperson told LifeSiteNews. “This has occurred despite not a single transmission being linked to a Catholic church.”

“It is especially cruel now that worship has resumed North of the border (the six counties of Northern Ireland, belonging to the U.K), some dioceses have Mass legal in one part but illegal in another.”

They explained that the “Rosary Rallies are lay led and have grown organically, they tap into the Irish psyche at a deep level as the Rosary sustained the faith in Ireland through centuries where Mass was suppressed,” echoing Schneider’s words.

“Those Catholics praying the Rosary are grateful for any and all international support, particularly from a bishop as esteemed as Bishop Schneider, who wrote the book Dominus Est as a testament to those who maintain a devotion to the Blessed Sacrament even when it is denied to them.”

Deacon Nick Donnelly, popular Catholic commentator and author of new book A Catholic Survival Guide for Times of Emergency told LifeSiteNews of his hope that, akin to Schneider, “other bishops, especially those of Ireland’s close neighbour, the United Kingdom, will also speak out against the criminalisation of the Mass and other sacraments.”

“I pray the Pope (Francis) will be able to break through his self-alignment to secular restrictions of the Church to follow Pope Pius XI’s example and publicly defend the Irish faithful.”