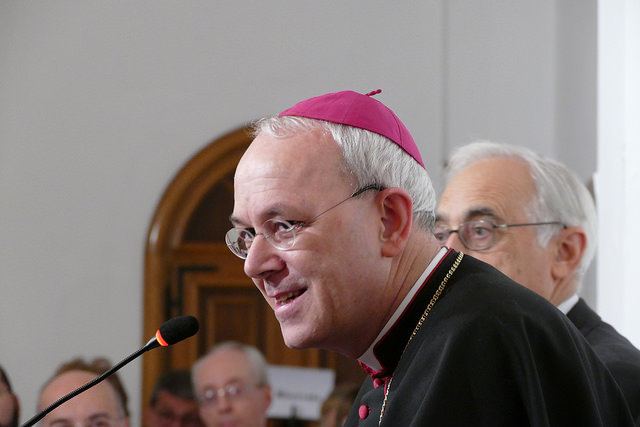 December 8, 2016 (LifeSiteNews) – “A certain kind of schism already exists in the Church,” Bishop Athanasius Schneider said, and it consists of those who align themselves with the pope to advance their careers yet reject Christ's fundamental teachings on marriage.

Schneider, the Auxiliary Bishop of the Archdiocese of Maria Santissima in Astana, Kazakhstan told this to TV Libertes in an interview addressing Amoris Laetitia and Schneider's support of the four cardinals' dubia to the pope asking for moral clarification.

“All these ecclesiastics who want another gospel, meaning a right-to-divorce gospel, a gospel of sexual liberty, in short, a Gospel without God's sixth commandment…make use of all evil means, that is to say ruses, deceptions, masterful rhetoric and dialectics, and even the tactic of intimidation and moral violence in order to attain their goal of admitting so-called ‘remarried’ divorces to Holy Communion, without the latter fulfilling the condition of living in perfect continence, a condition requied by divine law,” said Schneider. “Once the objective is attained, even if limited to so-called exceptional cases of discernment, the door is opened to introducing the gospel of divorce, the gospel without the sixth commandment. And this will no longer be the Gospel of Jesus, but an anti-gospel, a gospel according to this world, even if such a gospel is cosmetically embellished with terms such as 'mercy,' 'maternal solicitude' or 'accompaniment.'”

Citing St. Paul's letter to the Galatians, Schneider reminded the faithful that someone who “preaches a gospel to you besides that which we have preached to you” is “anathema.”

“On the subject of doctrine and practice concerning the sacrament of marriage, and the perennial validity of the moral law, we are witnessing in our times an ambiguity of such scope only comparable to the general confusion of the Arian crisis of the fourth century,” Schneider warned.

If the dubia remain unanswered, he said, and “if the pope does not fulfill his task in the current circumstances, the bishops have to indefectibly preach the unchanging Gospel concerning the divine doctrine of morality and the perennial discipline of marriage, coming fraternally in this way to help the pope even, because the pope is not a dictator.”

Disputes over the indissolubility of marriage and sacramental practice aren't only a risk, but a reality, he continued. Schneider stated:

It is not only a risk of schism, but a certain kind of schism already exists in the Church. In Greek, schism means to separate oneself from the totality of the body. Christ is the totality of the body of Divine Truth, and unity in His supernatural body is also visible. But we are witnessing today a strange form of schism. Externally, numerous ecclesiastics safeguard formal unity with the pope, at times, for the good of their own career or or of a kind of papolatry. And at the same time they have broken their ties with Christ, the Truth, and with Christ, the true head of the Church. On the other hand there are ecclesiastics who are denounced as schismatics despite the fact they live in canonical peace with the pope and remain faithful to Christ, the Truth, by assiduously promoting His Gospel of Truth.

It is evident that those who are internally the true schismatics, in relation to Christ, make use of calumnies for the sole purpose of silencing the voice of Truth by absurdly projecting their own state of internal schism on those ecclesiastics, who, regardless of praise or rebuke, defend the divine truths. In fact, as Sacred Scripture says, the word of Divine Truth is not bound. Even if a number of high-ranking officials in the Church today temporarily obscure the truth of the doctrine of marriage and its perennial discipline, this doctrine and discipline will always remain unchangeable in the Church, because the Church is not human foundation, but a divine one.

The bishop stressed the importance of praying for the pope and pointed out, “In Pope Francis’s words, he made [it] clear he did not have the intention of putting forward his own magisterial teaching” with the exhortation.