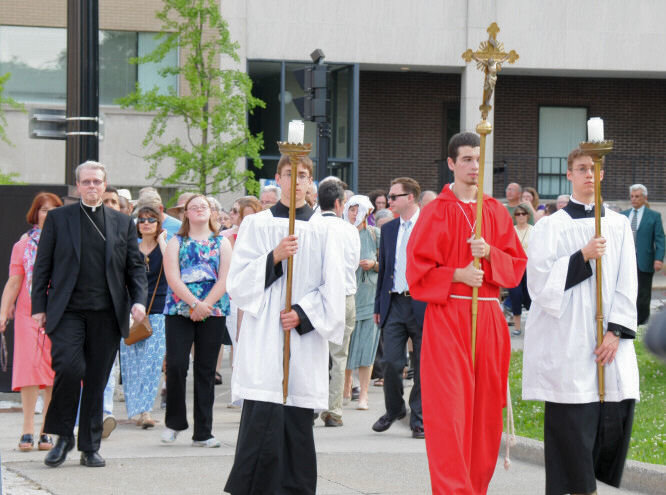 ALBANY, New York, July 30, 2018 (LifeSiteNews) – The root of the Catholic Church’s sex abuse crisis is “sin and a retreat from holiness, specifically the holiness of an integral, truly human sexuality,” Bishop Edward Scharfenberger wrote to the priests and seminarians of his diocese.

In a letter released by the Roman Catholic Diocese of Albany on Sunday, Scharfenberger blasted Cardinal Theodore McCarrick without mentioning his name, noting that the abuser prelate engaged in “incestuous” predation toward those in his spiritual care.

“No doubt you have been and will be hearing from your people about how shaken and discouraged they are over public revelations of despicable behavior on the part of a very popular and charismatic Cardinal with priests and seminarians in his care,” Bishop Scharfenberger wrote. “One holy and faithful Catholic gentleman – a medical professional and a dear friend – texted me just this morning about his family’s utter despondency over this and that the USCCB should disband itself: “[t]heir credibility is shot, probably for decades.”

Bishop Scharfenberger pledged to those who have “suffered such traumatic experiences at the hands of their spiritual fathers,” and expressed his hope that they would “find the courage” to come forward.

The sex abuse fiasco is “much more than a crisis of policies and procedures,” the bishop advised. “It is a profoundly spiritual crisis.”

Priests and cardinals are obligated to follow Church teaching that sexual activity outside of “a real marriage covenant” is a “grave sin,” he wrote:

In negative terms, and as clearly and directly as I can repeat our Church teaching, it is a grave sin to be “sexually active” outside of a real marriage covenant. A cardinal is not excused from what a layperson or another member of the clergy is not. A member of the clergy who pledges to live a celibate life must remain as chaste in his relationship with all whom he serves as spouses within a marriage. This is what our faith teaches and what we are held to in practice. There is no “third way.”

“Sexual activity” includes grooming and seduction – the kind of experience that one of our brothers tells of in a recent interview in America magazine that you may have seen. The psychological and spiritual destructiveness of such predatory behavior, really incestuous by a man who is held up as a spiritual father to a son in his care – even if not a minor – cannot be minimized or rationalized in any way. On that, it seems to me, we are experiencing an unusual unity amidst the many political and ecclesial tensions in our communities.

Abuse of authority – in this case, with strong sexual overtones – with vulnerable persons is hardly less reprehensible than the sexual abuse of minors, which the USCCB attempted to address in 2002. Unfortunately, at that time – something I never understood – the Charter did not go far enough so as to hold cardinals, archbishops and bishops equally, if not more, accountable than priests and deacons.

McCarrick, who resigned from the College of Cardinals this weekend and allegedly abused boys as young as 11 as well as his own seminarians, was one of the bishops who played a key role in drafting and promoting the anti-child abuse charter Scharfenberger mentioned. In the wake of revelations about McCarrick, many Catholics have pointed out that they complained for years the charter didn’t provide accountability for predator bishops. Others have also noted the incongruity of so many Catholic bishops clamoring for an official “policy” against evil as a solution to the crisis.

“My office doesn’t have a policy against plunging hammers into the necks of my colleagues. But my co-workers would not excuse themselves from the duty to stop me from doing this by citing the absence of such a policy in a rulebook, or by explaining that their job description did not explicitly include language about hammer-wielding colleagues,” Michael Brandon Dougherty wrote.

Scharfenberger seemed to acknowledge both of those points in his letter, writing, “More words are not going to repair, let alone restore, the damage that has been done. Lawyering, pledges and changes in the bureaucratic structures and policy – however well intentioned – cannot do it either…Abuse of authority – in this case, with strong sexual overtones – with vulnerable persons is hardly less reprehensible than the sexual abuse of minors, which the USCCB attempted to address in 2002. Unfortunately, at that time – something I never understood – the Charter did not go far enough so as to hold cardinals, archbishops and bishops equally, if not more, accountable than priests and deacons.”

The bishop believes “the vast majority of clergy…live or, at least, are striving to live holy and admirable lifestyles. I am ashamed of those of my brothers, such as the Cardinal [McCarrick], who do not and have not.”

“All of us who are ordained to preach what the Church teaches must practice what we preach and teach,” he wrote. “We also need to uphold what our faith proclaims about the gift and beauty of human sexuality, fully lived in its essential conjugal meaning. A culture of virtue and chastity – in short, personal holiness – rooted in a trusting and committed relationship with Jesus Christ is the path toward healing and wholeness, even as we seek to drive the evil behaviors among us from the womb of the Church.”