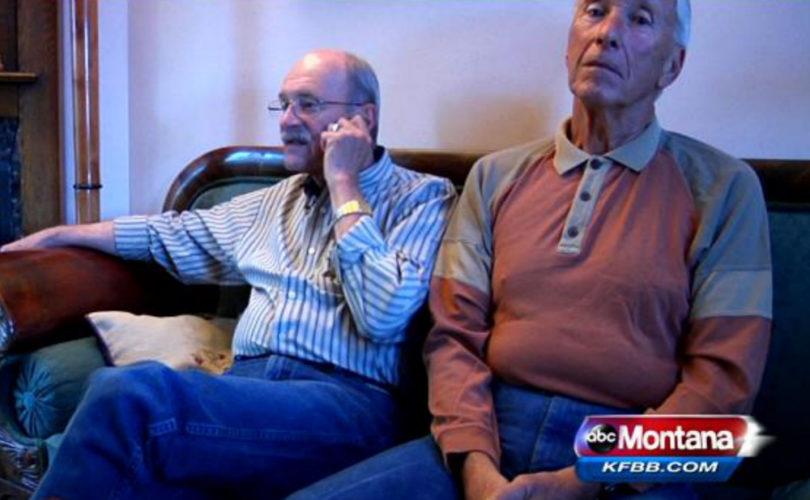 Paul Huff, 66, and Tom Wojtowick, 73, were “married” in Seattle in May 2013. Wojtowick was an organist at the parish, while Paul sang in the choir.Video screenshot

A Montana bishop is standing by one of his priests after the priest told a homosexual couple in his parish that they cannot receive Communion or participate in Church ministry due to the fact that they have contracted a civil “marriage.”

Paul Huff, 66, and Tom Wojtowick, 73, have reportedly been together for more than 30 years and were “married” in Seattle in May 2013, according to the Associated Press.

The men told the local ABC-FOX affiliate that Father Samuel Spiering approached them shortly after beginning his assignment as administrator of St. Leo the Great and asked if the rumor he’d heard of them being “married” was true. When they affirmed it was, he asked if he could meet with them the following day.

Father Spiering informed them the next day that they have broken Cannon Law, and that they would not be able to receive communion or continue in ministry.

Canon 915 holds that those persevering in manifest grave sin are not to be admitted to Holy Communion.

Both men sang in the choir and Wojtowick was an organist.

The men agreed to write a restoration statement that, in part, would uphold the concept of marriage being between a man and a woman, during an August 25 conference call with Father Spiering, Bishop Warfel and other diocesan officials. They said they did not intend to challenge the Church’s concept of marriage with their union, rather they just wanted civil protection.

However, the statement also included a timeline for the two men to cease living together and divorce, which they would not agree to.

In an interview with the Billings Gazette last week Bishop Warfel said he knows Wojtowick and Huff “to be good people.”

“This is not animus against someone who happens to be a homosexual; this issue is the same-sex marriage,” Bishop Warfel said. “A lot of people put those two together, and obviously there’s a connection, but it’s not the same thing.”

After meeting with parishioners on Sunday, the bishop said that he would like to “effect healing” at the parish, but pointed out that he also has to uphold Catholic teaching.

The bishop also confirmed for ABC-FOX-Montana on Saturday that Huff and Wojtowick could not receive Communion.

While Bishop Warfel acknowledged growing support for homosexual “marriage” when speaking with the Billings Gazette, he said the fact remains that it stands in conflict with Catholic teachings.

“As a Catholic bishop I have a responsibility to uphold our teaching of marriage between one man and one woman,” said Bishop Warfel. “And I think there’s very solid scriptural teaching on it and our sacred tradition is very strong on it.”

Those teachings leave him little choice, he continued.

“Either I uphold what Catholic teachings are or, by ignoring it or permitting it, I’m saying I disagree with what I’m ordained to uphold,” the bishop said.

“Everyone is welcome to the journey of conversion,” said Bishop Warfel. “But there are certain convictions, beliefs or behaviors that are in direct contradiction to what we believe and teach, and this would be one of them.”

Father Spiering has declined to speak publicly and there has not been an official diocesan statement on the issue since the meeting at the parish on Saturday.