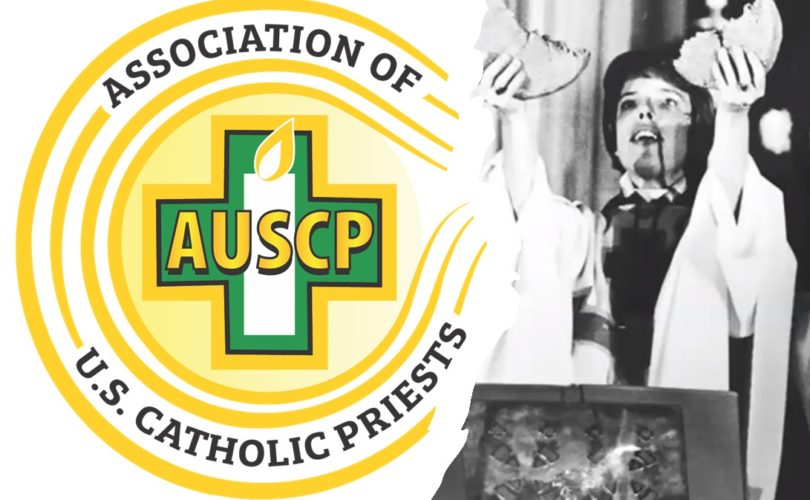 May 19, 2021 (Lepanto Institute) – The Lepanto Institute has been ringing the alarm bell about the Association of U.S. Catholic Priests (AUSCP) and its unrelenting push to undermine Catholic teaching for several years now. In the past, we’ve reported on this group for its alliance with sexually deviant organizations and agendas, its work with an international network of heretical organizations, and its call for “priestless parishes.”  The AUSCP’s scandalous work even elicited a warning from its own bishop, Bp. Daniel Thomas, who said that any association with the AUSCP “may be a source of grave concern due to the confusion and scandal they have caused.”

Now the AUSCP is taking action to push for the ordination of women to the permanent diaconate with an eye toward ordination to sacramental priesthood.

In an April newsletter, the AUSCP urged its priest members to visit a website called www.Discerningdeacons.org and participate in a “Discerning Deacons week of action,” saying:

“Help us launch and spread the good news about the active discernment of our Church about women in diaconal ministry. Our goal is to invite 100 supporters to join us in small daily actions to get the word out.”

One of the speakers in the virtual event is Dr. Phyllis Zagano, whose work we spotlighted in 2016.  The reason it is so important to these dissidents to see women ordained to the diaconate is so the discussion on the ordination of women to the priesthood can be opened.  Walking a razor-thin line, so as not to cross over into outright promotion of women’s priesthood, Zagano wrote an article in 2003 for the Jesuit-run America magazine on “the case for Catholic women deacons,” in which she said:

Linked in the AUSCP newsletter announcing the event were sample prayers “For the Restoration of Women to the Deaconate.” The first prayer offered the following petition to God:

“We long to hear the Good News
announced by women ordained to serve your people
through the Word, liturgy, and charity.

We need women restored to the diaconate,
and we ask your Holy Spirit to open hearts and minds
to embrace this return to tradition.”

Just a few months before this zoom meeting, the AUSCP hosted the heretical FutureChurch in a webinar that unmistakably mapped out a path to the priestly ordination of women.  The January 19, 2021 webinar titled, “Is Pope Francis Really Creating a More Inclusive Presence for Women” gave a platform to FutureChurch co-director, Deb-Rose Milavec.

Milavec opened her presentation to express disappointment that Pope Francis hasn’t done more to open the way for women to hold positions in the hierarchy, and at 7 minutes 37 seconds into the video, a participant identified as “Frank” suggested that decentralizing the Church with universally applicable laws could lead to a more regional and cultural church opening the way to women’s ordination to the priesthood on a limited basis.

At 11 minutes 39 seconds, Milavec gave her assessment of how the women’s liberation movement in the Catholic Church, beginning with Vatican II and moving through the removal of the habits of nuns, women entering into the field of theology, etc, ultimately opened the way for women to become “priests” in protestant sects.

Milavec’s next slide celebrated these Episcopal women “priests” who “pioneered a path.”

She then went on to criticize the Vatican’s reaction to this momentum and states [13:30 ff] that Pope St. John Paul II “tries to cement [Paul VI’s Inter Insigniores] by claiming Papal infallibility” and “demands silence on the topic and punishes dissenters” while “building an alternate reality” called “complementarity, or as I like to call it, the separate but equal clause in the Catholic Church, kind of a Jim Crow version…”

Remember, this was an official webinar presented by the AUSCP to its priests! The “largest association of Catholic priests” in the United States is listening and learning from this heretical bilge and passing it along to their own parishes while the national organization is applying pressure to the Church at large.

Keep in mind that FutureChurch is officially on record in support of women’s ordination to the sacramental priesthood, and even has a FAQ section on its website that claims that Jesus did not establish ordination as a sacrament!

As for Deborah Rose-Milavec, she is not only in favor of women’s ordination to the priesthood, but she is also heavily supportive of sexual perversion.

In 2016 we noted that Deborah Rose-Milavec celebrated the Supreme Court’s 2015 ruling in favor of same-sex “marriage,” announcing that her “best friends [are] legally married.”

— Article continues below Petition —
PRAYER PLEDGE: Join faithful Germans in prayer to STOP homosexual "blessings" and plunge into schism
Show Petition Text
11104 have signed the petition.
Let's get to 12500!
Thank you for signing this petition!
Add your signature:
Show Petition Text

Amid many other posts where Deborah Rose-Milavec celebrated the same-sex “marriage SCOTUS ruling,” she praised a host of homosexual activists, saying:

In addition to changing her picture to reflect the celebration of the SCOTUS ruling on same-sex “marriage,” Rose-Milavec posted a disgraceful image of the homosexual rainbow flag superimposed over the image of Cardinal Raymond Burke.

Page 17 of this white paper states that Franciscan, liberation and feminist theologies open the way to reconsidering the entire “understanding of both sacraments and grace.” In other words, the Church’s teaching on how Sacraments work is wrong, and we need to understand it in a whole new way. This, according to the AUSCP, gives us the opening to change Church teaching on the ordination of women to the priesthood. The document states: “Such Franciscan models of sacramental causality provide us with an opening to reconsider the current Church discipline that restricts sacramental roles primarily to ordained celibate male ministers.”

The AUSCP states as two implications of this new understanding of the sacraments:

The baptized have a right to enhanced sacramental opportunities. Limiting ordained ministry to males is an act of injustice to the baptized. [emphasis added]

Likewise, depriving one half of the human race of the capacity to serve as ordained ministers is an act of injustice

With these statements the AUSCP is officially challenging the Church’s teaching on the ordination of women.

Despite the evidence presented in our reports and the thousands of calls and emails sent by faithful Catholics, a small but influential cadre of bishops, archbishops and cardinals continue to openly support the AUSCP. Some, like Bishop Stowe, are actual members of the organization. Archbishop Wester is the AUSCP’s official liaison to the USCCB. Cardinal Cupich often attends and presents at AUSCP annual assemblies. This year, Bishops Pates and Wack will be speaking at the AUSCP’s Annual Assembly. And, aside from Bishop Thomas’ warning, no bishop in the US has publicly condemned the heretical organization or forbid his priests from joining.

When the wolves are permitted free range in the pasture, you can bet they will take full advantage.

None of this would be possible for the AUSCP if it were not for the support and cover it receives from its episcopal allies. The longer this cabal of heterodoxy is permitted to operate and function without fear of consequences or reprisals, the greater its influence will become.

Please contact your bishop (you can find their contact information here) and request that he formally condemn the AUSCP, forbidding his priests from joining, supporting, or associating with the Association in any way. Also, contact the Archdiocese of Milwaukee, requesting that they formally retract the promotion in the Cincture.  Here is a sample letter you can use for your bishop: Sample Letter to Bishops.

Reprinted with permission by The Lepanto Institute