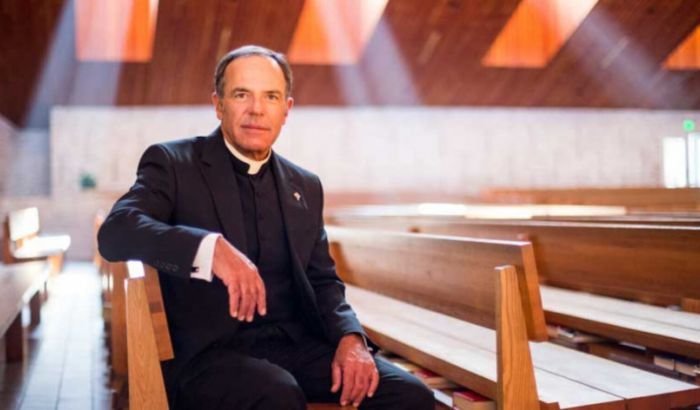 Despite the priest admitting that some of his phrasing was stated “rather poorly,” and “it was not my intention to offend anyone and I am sorry that my words have caused any hurt to anyone,” Bishop Timothy L. Doherty removed Rothrock from his parish and told the faithful, “if anyone asks you, you can tell them that this bishop says that Black lives matter.”

Rothrock had asked in his parish bulletin on June 28, “Who are the real racists and the purveyors of hate?”

“You shall know them by their works,” he proceeded. “The only lives that matter are their own and the only power they seek is their own. They are wolves in wolves clothing, masked thieves and bandits, seeking only to devour the life of the poor and profit from the fear of others. They are maggots and parasites at best, feeding off the isolation of addiction and broken families, and offering to replace any current frustration and anxiety with more misery and greater resentment.”

The priest emphasized that the message of peace is at the heart of the gospel “we carry in common with the Orthodox Churches and other Christians.” He encouraged Catholics to stand “in solidarity with our brethren across the world to oppose this malevolent force.”

He said, “Black Lives Matter, Antifa, and the other nefarious acolytes of their persuasion are not the friends or allies we have been led to believe. They are serpents in the garden, seeking only to uproot and replant a new species of human made in the likeness of men and not in the image of God.”

“Their poison is more toxic than any pandemic we have endured,” he added. “The father of lies has not just been seen in our streets, we have invited him into our home. Now he is prowling like a roaring lion looking for someone to devour. Resist him, strong in your faith.”

Rothrock referred to abolitionist Frederick Douglass and leader of the civil rights movement Martin Luther King, Jr., asking if they would have engaged in what rioters are currently doing across the United States.

“What would the great visionary leaders of the past be contributing to the discussion at this point in time?” he asked. “Would men like Fredrick Douglas [sic] and the Reverend King, both men of deep faith, be throwing bombs or even marching in the streets? Would they be pleased with the murder rates in our cities or the destruction of our families by the welfare system? Would they see a value in the obliteration of our history to re-write a future without the experience and struggles of the past? Would we tear down their monuments?”

The suspended priest made a distinction between the statement that black lives matter, and the Black Lives Matter movement, as such.

While Catholics know that black people are human beings made in the image and likeness of God, with equal dignity to people of any other race, the Black Lives Matter movement has adopted positions incompatible with Catholic teaching.

The movement, according to its website, endorses homosexuality and gender ideology. “We foster a queer‐affirming network. When we gather, we do so with the intention of freeing ourselves from the tight grip of heteronormative thinking, or rather, the belief that all in the world are heterosexual (unless s/he or they disclose otherwise).”

Additionally, Black Lives Matter wants to abolish the traditional family. “We disrupt the Western-prescribed nuclear family structure requirement by supporting each other as extended families and ‘villages’ that collectively care for one another, especially our children, to the degree that mothers, parents, and children are comfortable.”

Bishop Doherty immediately reacted to Fr. Rothrock’s message in the bulletin. “I neither approved nor previewed that article,” the prelate insisted, before publicly asking his priest “to issue a clarification about his intended message.”

At the same time, the bishop said he had not known Rothrock “to depart from Church teaching in matters of doctrine and social justice.”

In response, the priest said, “It was not my intention to offend anyone and I am sorry that my words have caused any hurt to anyone.”

He added that all people are welcome in God’s kingdom. The church must condemn bigotry, which is “a part of the fabric of our society.”

In spite of his apology, on July 1, he was officially “suspended from public ministry according to Canon 1333” of the Church’s canon law. According to the diocese’s statement, “The Bishop expresses pastoral concern for the affected communities. The suspension offers the Bishop an opportunity for pastoral discernment for the good of the diocese and for the good of Father Rothrock.”

While pointing out that several options “for his public continuation in priestly ministry are being considered, […] he will no longer be assigned as Pastor of Our Lady of Mt. Carmel as his next appointment.”

The Diocese of Lafayette declined to comment on why Rothrock was suspended even after issuing an apology.

On Sunday, Doherty told the parish community of St. Elizabeth Seton that the parish “has a wonderful history, and Father Ted Rothrock has been very much a part of this.”

Without explicitly referring to the suspended priest, the bishop said that “defining others is perilous.” He then pointed out that there are dozens of groups that use the motto Black Lives Matter (BLM). “One of them, The Black Lives Matter Global Network Foundation, clearly says things that I oppose,” Doherty emphasized. “Second, it is only one organization among many dozens using the phrase BLM, and it is a mistake to say that that foundation is the headquarters of what is a very diverse movement.”

“I am here today also so we remember who I am, the bishop over this parish community,” he continued. “As every priest learns at seminary, and as we hear in the words for the Ordination of Priests, the priest, the pastor, is an extension of the bishop’s ministry. A priest’s capacity to celebrate Mass and Sacraments is an expression of the bishop’s own mission to govern, teach and sanctify. Each Mass reminds us of this connection when the bishop is prayed for by name.”

He asked, “Could we imagine that Fr Rothrock’s bulletin article of June 28, much less his choice of wording, is an extension of, and expression of a Catholic bishop’s apostolic role in the Church?”

Answering his own question, the bishop said, “Some people chose to think so. But we know it is not, and in my conversation here on Wednesday with Father Ted, he knows it too. The serious consequences of that article are still playing out among us, and in the wider community. I chose the suspension provided for in church law.”

The bishop asked for continued prayers, for both Fr. Rothrock and his former parish, before concluding his remarks by saying, “And if anyone asks you, you can tell them that this bishop says that Black lives matter.”

Fr. Rothrock’s former parish did not return a request for additional comment.

Popular talk radio host Glenn Beck defended Rothrock. “He is not lying,” Beck said. “He is telling the truth. This man is a Dietrich Bonhoeffer. This man is somebody who is willing to go to the gallows to speak the truth. And shame on every Catholic that doesn’t recognize this.”

“If you don’t believe his words, read Black Lives Matter, their own website,” he added. “You cannot stand with these people.”

Patrick Coffin, former host of Catholic Answers Live and now host of The Patrick Coffin Show, commented, “I’m a little confused here. Our Lord Jesus Christ laid into his enemies to their face when the time and the place called for it. Brood of vipers, blind guides, fools, dogs, pigs.”

“If your name’s Fr. James Martin, you can frolic anywhere you like on behalf of any and all things lavender,” Coffin pointed out, talking about the pro-homosexual Jesuit priest. “But if you speak up against violent anti-Christian mobs, you’re gone.”

“God help our good priests and ballsy laymen who have had enough, frankly, of weak leaders in the Church, willing to remove its own statues and punish its own prophets,” he concluded.

Just a few weeks ago, Catholic priest Father Daniel Patrick Moloney was forced to leave his position as chaplain at the Massachusetts Institute of Technology (MIT) after sending an email to campus Catholics questioning whether the death of George Floyd was the result of racism.

In the same June 7 email, Fr. Moloney also questioned Floyd’s character, saying that while of course Floyd shouldn’t have been killed by the police officer, “he had not lived a virtuous life.”