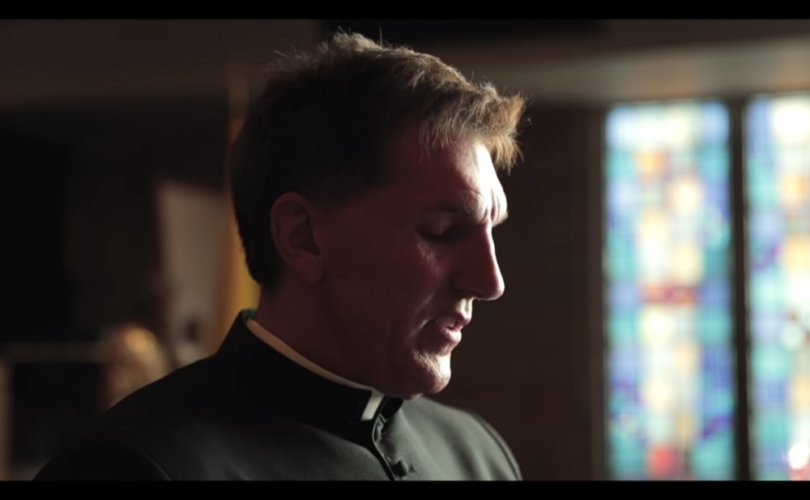 LACROSSE, Wisconsin, September 10, 2020 (LifeSiteNews) – After a Catholic priest’s video message, “You cannot be Catholic & a Democrat. Period.,” went viral, his bishop appears to be taking measures to silence him even as public support for the courageous priest grows.

“[The] bishop does not want live-streaming of the Masses,” he told the faithful after his live-streamed Mass today. “This might be the very last live-stream of the Holy Sacrifice of the Mass that I can give. That is unfortunate, but, the ‘manner and tone’ of the people opposing us is just that vile and despicable…it causes everyone to cave, and indeed it appears to be the case here.”

Altman also explained, “You’ll notice the children are not here today. And the reason they're not here today is because of the ‘manner and tone’ of several vile and despicable comments and letters and emails and phone calls that were made both to the diocese and to my parish office after [Jesuit Father] James Martin urged his followers in public to contact us and complain.”

“When we talk about manner and tone, that speaks volumes. [We’ve] seen the manner and tone throughout the last hundred and some days all around the country. We’ve seen what evil manner and tone actually is. The reason why the children aren’t here today is because of that specifically.”

“If anybody wants to complain about manner and tone,” he suggested, “perhaps they should start with those people whose manner and tone actually is diabolical and evil…”

LaCrosse Bishop William P. Callahan issued a statement yesterday faulting the “manner” and “tone” of Fr. Altman’s message telling people not to vote for pro-abortion Democrats, which has now been viewed over 475,000 times and will likely surpass a half million views in the next 24 hours.

“Canonical penalties are not far away if my attempts at fraternal correction do not work,” promised Bishop Callahan, who accused Fr. Altman of having inflicted a wound on the Body of Christ.

As Fr. Altman faces disciplinary measures from his bishop, support for the beleaguered but unwavering priest has been pouring in from many corners.

Bishop Joseph Strickland of Tyler, Texas was the first to declare explicit support for Altman’s message, saying via Twitter, “As the Bishop of Tyler I endorse Fr. Altman’s statement in this video.”

“My shame is that it has taken me so long. Thank you Fr Altman for your COURAGE. If you love Jesus & His Church & this nation…pleases [sic] HEED THIS MESSAGE,” said Strickland on Saturday.

As the Bishop of Tyler I endorse Fr Altman’s statement in this video. My shame is that it has taken me so long. Thank you Fr Altman for your COURAGE. If you love Jesus & His Church & this nation…pleases HEED THIS MESSAGE https://t.co/D413G0lfQV

I support Fr. James Altman's video because I believe, not only Catholic Christians, but ALL God's people must ask themselves some tough questions each time they prepare to cast their vote in any local, state, or national election.

Voting is not an easy task nor one to be taken lightly. On the contrary; it requires research, prayer, and discernment. We must ask ourselves- Do we believe in God. Do we as a nation believe in God? Are we willing to acknowledge our sins and seek repentance and reparation as individuals and as a nation? Are we casting our vote through the lens of Jesus Christ and his Teachings?

If my support of Father Altman can prompt meaningful conversations and prayerful discernment about these questions, then I am at least beginning to fulfill my role as a pastor of souls and a disciple of Jesus Christ.

Father Richard Heilman, a popular speaker and writer, expressed his support for Fr. Altman by promoting on Facebook a “Peaceful Prayer Rosary Rally” to be held at Fr. Altman’s parish this Sunday.

“I’M GOING!!” declared Heilman, founder of Roman Catholic Man website, and creator of the “Combat Rosary,” in all caps.

And we wonder why we don't have many faithful priests when their bishops pander to the Democrats and throw them under the bus when priests preach the truth.

“If Father Altman is silenced for this video, that will be the bigger scandal,” tweeted Teresa Beem. “Many will be wounded. A judgmental tone is exponential better than preaching heresy or misinformation with a perfect tone & smile.”

If Father Altman is silenced for this video, that will be the bigger scandal. Many will be wounded. A judgmental tone is exponential better than preaching heresy or misinformation with a perfect tone & smile. Satan is an angel of light. Prophets preach with hellfire. Read the OT.

With Cardinal Wuerl leaving disgraced because he had lied and covered up, and with Cardinal McCarrick being laicized for his crimes, did we ever learn if they were in a state of grace when they made these momentous decisions regarding pro-abortion rights politicians? pic.twitter.com/36JLY89gPf

“If Father's bishop feels the need to correct his priestly son, that is his right to do so. But the bishop in question had better take a long look in the mirror and assess where he has been in messaging regarding abortion and Catholic politicians who claim full status with the implication of no sinful impediment to reception of the Eucharist,” wrote Dr. Gerard M. Nadal, a molecular biologist and microbiologist who is also President-CEO at Coalition on Abortion/Breast Cancer, in a Facebook posting.

Nadal said that he thought Fr. Altman was wrong to declare that “Joe Biden, Nancy Pelosi, and the rest of the wayward Catholic gang in office” are not Catholics, but then issued a strong warning to Bishop Callahan.

“He had better take careful stock of what degree of silence he may or may not have been guilty of in speaking out forcefully against this greatest of American sins before dishing out canonical penalties in a unilateral fashion, lest he impale his soul upon his tongue,” cautioned Dr. Nadal.

“How quick he was to jump all over his priest. Has he done so with pro-abort Catholic politicians and Communion?” wondered Nadal. “The laity are expected to be just as obedient to the teaching authority of the Church and her bishops as priests are expected to be.”

Other social media users praised Fr. Altman as a hero and expressed gratitude for him “passionately defending the Catholic faith, for daring to call out those clergy and laity alike who do not live Christ's message.”

With all due respect Bishop Callahan, the “Church of Nice” or the “your tone is mean” club is killing the Church. Everything Fr. Altman said was spoken with true charity – that is not void of truth like most homilies these days. @DIOLaCrosse #IStandWithFrJamesAltman pic.twitter.com/ipxzfNb8fW

His bishop, Bishop Callahan, is about to “silence” this brave priest for courageously speaking truth to power, for passionately defending the Catholic faith, for daring to call out those clergy and laity alike who do not live Christ's message. #IStandWithFrJamesAltman pic.twitter.com/NKb2LzmZIJ

Fr. James Altman has become a social media phenomenon and is now a main stream media story. The amount of calls and emails we are receiving at the Diocesan offices show how divisive he is. I am being pressured by both sides for a comment; one side holds him up as a hero or a prophet, the other side condemns him and vilifies him and demands I silence him.

As I review Fr. Altman’s latest video statement of 30 August 2020, I understand the undeniable truth that motivates his message. When we approach issues that are contradictory to the Faith and teachings of Jesus Christ and the Catholic Church, particularly on abortion and other life issues, we should invite dialogue and heart-felt conversion to the truth. Our approach must never seek to divide, isolate and condemn.

That being said it is not only the underlying truth that needs to be evaluated but also the manner of delivery and the tone of his message. Unfortunately, the tone Fr. Altman offers comes off as angry and judgmental, lacking any charity and in a way that causes scandal both in the Church and in society. His generalization and condemnation of entire groups of people is completely inappropriate and not in keeping with our values or the life of virtue.

I am applying Gospel principles to the correction of Fr. Altman. “If your brother does something wrong to you, go to him. Talk alone to him and tell him what he has done. If he listens to you, you have kept your brother as a friend. But if he does not listen to you, take one or two others with you to talk to him.” (Mt 18:15-16). I have begun this process, not in the bright light of the public arena, but as the Gospel dictates, in private. Canon law indicates that before penalties are imposed, we need to ensure that fraternal correction, rebuke or other means of pastoral solicitude will not be sufficient to repair the scandal (can. 1341).

Most people expect a decisive move from me, one way or another. Many suggest immediate penalties that will utterly silence him; others call for complete and unwavering support of his views. Canonical penalties are not far away if my attempts at fraternal correction do not work. I pray that Fr. Altman’s heart and eyes might be open to the error of his ways and that he might take steps to correct his behavior and heal the wound he has inflicted on the Body of Christ.

Pray for me as I address this issue, and pray for Fr. Altman that he might hear and respond to my fraternal correction. Finally, please pray for the Church that we might seek the truth in charity and apply it in our daily actions.