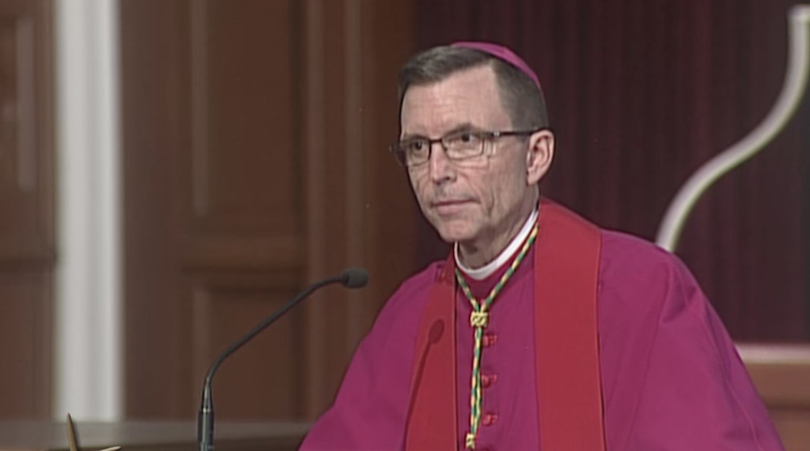 BOSTON, Massachusetts, August 29, 2018 (LifeSiteNews) – Next month, an American bishop will do 24 hours of public penance in reparation for the crisis in the Church.

Robert Reed, 59, an auxiliary bishop of the Archdiocese of Boston since 2016, placed his intentions in the bulletin of the parish where he is pastor, Good Shepherd Catholic Church in Wayland, MA. The bulletin is dated Sunday, August 26. (Bishop Reed’s full statement is posted below.)

Reed stated that he is “deeply disturbed by what is happening in the Church” and wondered what he could do. His only answer was that he could fast and pray.

“To that end,” he wrote, “and as your pastor, I commit myself to a full day and night of public penance.”

On Monday, September 24, Bishop Reed will celebrate his usual 9:00 a.m. Mass and then pray and fast before the Blessed Sacrament until 9:00 a.m. the next day, when he will again say Mass.

He invited his parishioners to join him during his long vigil, for a few minutes or a full hour.

The notice was spotted by Catholic author Leah Libresco, who posted it on Twitter.

The Boston Archdiocese, considered the epicenter of the American clerical sexual abuse crisis in 2002, has been back in the news thanks to reports that Boston’s archbishop, Cardinal Seàn O’Malley, did nothing upon receiving a letter of complaint regarding the sexual misconduct of Archbishop Theodore McCarrick. O’Malley fundraised and travelled with McCarrick after his office was warned of the ex-cardinal’s predation and sexual misdeeds.

O’Malley, the President of the Pontifical Commission for the Protection of Minors, has said that his secretary did not show him the letter because the victims it mentioned were not minors, i.e. their cases “fell outside the mandate of the Commission.”

The admission that there are “credible” allegations that McCarrick sexually molested a minor has touched off another clerical sex abuse scandal, the spotlight this time on men who may have covered up for McCarrick’s abuse of boys and young men, as well as McCarrick’s preying on seminarians and priests.

Shortly after revelations about McCarrick came to light, the Pennsylvania grand jury report detailing decades of abuse and systematic cover-up by six Catholic dioceses, including one led by now-Cardinal Donald Wuerl, was released.

Besides his duties as parish priest and archdiocesan administrator, Bishop Reed is the President of the CatholicTV Network and CEO of iCatholic Media, Inc. He was educated at Boston University and the Pontifical North American College in Rome, receiving degrees from both the Gregorian and the Angelicum.

A couple years ago, on a Monday morning, I was informed that I had been named a bishop. When I accepted, I was conscious of the fact that, I also would have to accept whatever the future held with a complete openness to God’s will; much like in a marriage, or when I was ordained a priest.

These days, I find myself deeply disturbed by what is happening in the Church. I know the bishops must act decisively and that the action needs to be thorough, transparent, professional and in cooperation with competent laypeople. But still, I ask the question: what can I do?

All I know is that I can pray and do penance. To that end, and as your pastor, I commit myself to a full day and night of public penance.

On Monday, September 24, 2018, I will celebrate the 9 o’clock Mass in Saint Ann Church as I usually do. Following that Mass I will expose the Blessed Sacrament and remain there in prayer and fasting until the next morning, concluding this period of prayer and penance with the celebration of the 9:00 am Mass on Tuesday.

All throughout this period, the church will remain open. You are most welcome to join me in prayer for a few minutes or for a full hour. In fact, I would welcome your presence as I do the only things I know to do in the face of evil; prayer and penance.