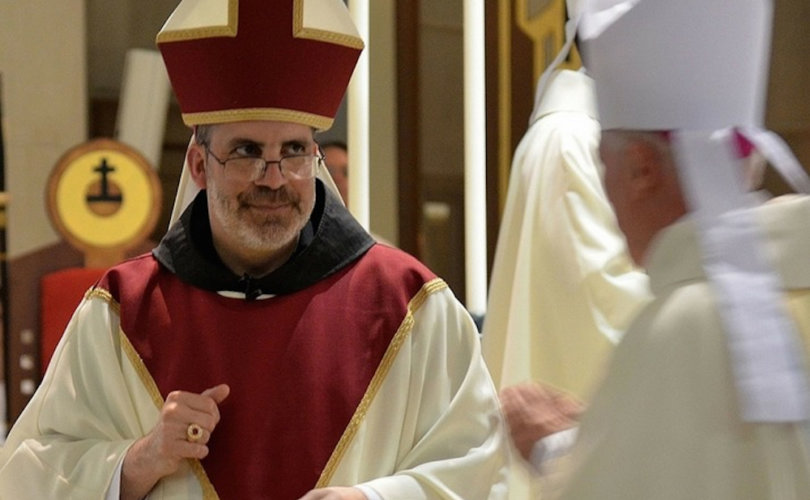 CHICAGO, May 9, 2017 (LifeSiteNews) — Bishop John Stowe of Kentucky has made good on his controversial promise to speak at a New Ways Ministry conference, even though the Catholic group advocates homosexual “marriage” and has been condemned by the Vatican and the U.S. bishops.

The 51-year-old Franciscan, who was ordained the bishop of Lexington in May 2015 by Pope Francis, gave two Gospel reflections at the April 28-30 symposium, which was called “Justice and Mercy Shall Kiss: LGBT Catholics in the Age of Pope Francis.”

Cardinal Blase Cupich of Chicago, where the event took place, has not publicly commented on the symposium, nor on Bishop Stowe’s speaking there.

“Christian morality is more concerned with the well-being and dignity of the person than with rules, norms or commandments. Jesus seems to teach this on many occasions,” Stowe told the 300 or so participants at the conference in a reference to Matthew 12:1-14, reported the National Catholic Reporter.

Members of New Ways Ministry have shown “a valuable expression of mercy” by calling the Catholic Church “to be more inclusive and more Christ-like, despite being given so many reasons to walk away,” Stowe told the NCR during the conference.

He faced a backlash after news broke in December that he would attend the New Ways Ministry symposium, said the bishop.

“The flack has been enormous and continues on the blogosphere,” and from “self-righteous strangers online and those who subscribe to these feeds,” Stowe said, adding that some posts and emails were “vicious.”

Stowe had earlier defended his decision by pointing to Pope Francis’s call to mercy.

“I think Pope Francis has signaled that we need to take another look at those things (homosexuality),” he said in December on the Mike Allen Radio Show, an online Catholic program out of Lexington.

Moreover, Catholic teaching on homosexuality is not  “immune from ever changing,” Stowe said then.

“Our usual way of thinking is that justice and mercy are incompatible,” Stowe told the NCR, but Pope Francis has asked Catholics to be open to each other.

“We all still require [mercy]; it's about the need for a conversion of attitudes for both the institutional church and for all its members.”

New Ways Ministry, which lobbies for the Catholic Church’s acceptance of homosexual relationships, including “marriage,” was condemned in 2010 by the president of the United States Conference of Catholic Bishops (USCCB), Cardinal Francis George of Chicago, and in 2011 by Washington Cardinal Donald Wuerl, USCCB chairman of the Committee on Doctrine.

Moreover, in 1999 the Vatican Congregation for the Doctrine of the Faith “permanently prohibited” the group’s co-founders, Sr. Jeannine Gramick and Fr. Robert Nugent, “from any pastoral work involving homosexual persons,” after ruling their teaching was “erroneous and dangerous” and “doctrinally unacceptable.”

Nugent, who died January 1, 2014, generally followed the Vatican order, but Gramick did not, and left the School Sisters of Notre Dame for the Sisters of Loretto over the matter.

Indeed, the 75-year-old religious was front and center at the symposium, and introduced Sr. Simone Campbell, who rose to fame as pro-abortion leader of the “Nuns on a Bus” campaign.

Executive director of the social justice group NETWORK, Campbell is widely regarded as undermining the abortion concerns of the U.S. bishops during the Obamacare debate.

She preached at the pre-symposium’s optional retreat.

“Let us pray as Jesus taught us: Our Mother, Our Father … ” intoned Campbell during the retreat’s opening prayer service, which included a “reading” from Pope Francis.

“Don’t get bogged down in your own limited ideas and opinions, but be prepared to change or expand them. The combination of two different ways of thinking can lead to a synthesis that enriches both. The unity that we seek is not uniformity, but a unity in diversity, or reconciled diversity. Keep an open mind” was the papal text, although the source document was not cited.

The speakers included Fr. Bryan Massingale, who teaches moral theology at Fordham University in New York and is a priest for the Archdiocese of Milwaukee, where he was at one point spiritual director of seminarians.

“I don’t believe in a vengeful God, I really don’t, but there are times when I hope that someone has to account for the spiritual damage that’s being done that leads people to walk away” from the Catholic Church, he told the symposium.

The bishops must know that LGBT Catholics are involved in church ministries, observed a participant before asking how the bishops are “reckoning” with that.

Massingale replied that “there is more going on in our church than is sometimes reported,” but that the Catholic Church is not the bishops.

“We have to stop this dysfunctional dance to ask Father to baptize our every opinion,” Massingale said. “The church is us.”

The symposium also featured, on a loan from a sympathetic priest, a collection of relics of saints who New Ways ministry director Frank DeBernardo said “are known or thought to be LGBT people.” He named Perpetua and Felicity, Sergius and Bacchus, Joan of Arc, and Aelred of Rievaulx.

Conference sessions included “Lesbian Nuns: Gift to the Church,” “Gay Men in Priesthood and Religious Life,” and “Transgender & Intersex Identities and the Family.”

U.S. Bishop rips Church teaching on homosexuality: ‘That was not Jesus’ approach’

Priest to LA Religious Congress : ‘It’s impossible to give a moral rule that applies always’